I’ve been wondering about this for awhile and was wondering if anyone had knowledge or could answer this.

So I was testing my 4004 in WalkTest, this was awhile ago back when the old alarm setup was up from New System Test 1, but I noticed a few different things about the WalkTest than on this feature on other panels, and was wondering why this is.

Anyways, when I tripped a pull station, the panel started to beep like it normally does when it goes into alarm, and it sounded one short blast (the zone coding). Now I’ve seen videos where of you leave a device like a pull station open for too long or activate a device on the same zone, it will do two quick short blasts at the rate of 120bpm march time to indicate this.

However, my panel does not do this. If the panel is still beeping and hasn’t reset yet and I trip another device, nothing happens for awhile. And when it does, instead of hearing these two quick short blasts like I believe I’m supposed to, I just hear the zone 1 zone code again and the same thing happens if I activate another device and it (the panel) hasn’t reset itself yet.

I tried this also on zone 2. Activating the smoke detector gets the same beeping and two blasts (zone coding for zone 2). When I activate the key switch and the smoke and panel hasn’t reset yet, again nothing happens. If it has, it just does the zone coding again.

I thought that the consecutive device on the same zone or the EOL on that zone causes the two rapid blasts, but on my system, this never happens. I either get nothing or if it reset itself again, the zone code once again.

Anyone have any insight on why this may be occurring? It doesn’t make much sense that the 4002 series and the 4005 series do this but my panel doesn’t, especially since my 4004 was made in 1999, long after the 4002 had ceased production. Is it simply because the panels so small that Simplex thought it didn’t need that or is it some kind of glitch that’s not good for it? Because the manual just tells you how to turn it on and off, not what it should exactly sound like, and I’m curious as to why it behaves differently and wondered if this was normal or an issue. 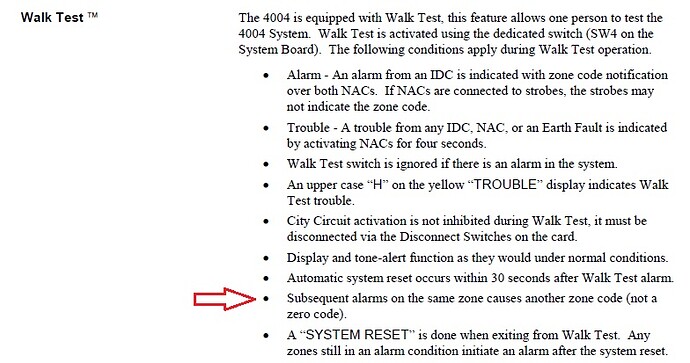 Thanks for the information! I must’ve missed that section!