Well, the EST QuickStart at my high school is no more! The system was too quiet apparently, so a new system was installed this spring. The new system is a Kidde VS4, and the alarms are now mainly EST Genesis GC-HDVM horn/strobes, now installed in the classrooms and washrooms as well. Places where there is open ceiling, like the atrium, gymnasium, and shop have EST Genesis G1R-HDVM horn/strobes, in the gym, two are where the old bell/strobes used to be. Outside, ONE bell was replaced with an EST WG4RN-HVMC horn/strobe, the other two have plates covering where they were. The outdoor EST CS405-8A-T strobe remains, the only notification appliance not to be affected. The pull stations are still the original EST SIGA-270, but the smoke detectors are now Kidde KIR-PD. When the system goes into alarm, all strobes (indoor and outdoor) are synchronized, and all horns do code-3.
Top

My elementary school previously had an EST 6616 panel (installed circa 1994-1995). Initiating devices were a variety of 270-SPOs (older and newer models; French, English and bilingual versions) along with 6200-series smoke detectors. Signals were EST 882-2C horns. I noticed, while walking by the school a few weeks ago, that the panel is now a Notifier NFS2-640.

My junior high/high school had an EST2 system with a 2-CMDN annunciator (shown below); this system appears to have been installed around 1997-1998. Pull stations were round Standard Electric Time models along with a few 270-SPOs installed as replacements, while smoke detectors were EST SIGA-PSs. Signals were EST 757-1A-T (Integrity) horns set to continuous along with single-gang Integrity remote strobes in certain areas. While walking by the school yesterday, I noticed that a Notifier LCD-160 annunciator on a large silver trim plate was now sitting where the 2-CMDN was previously mounted; this leads me to believe that the new panel is a Notifier NFS2-3030. I was expecting the EST2 to be replaced as construction on a large addition began about one year ago. 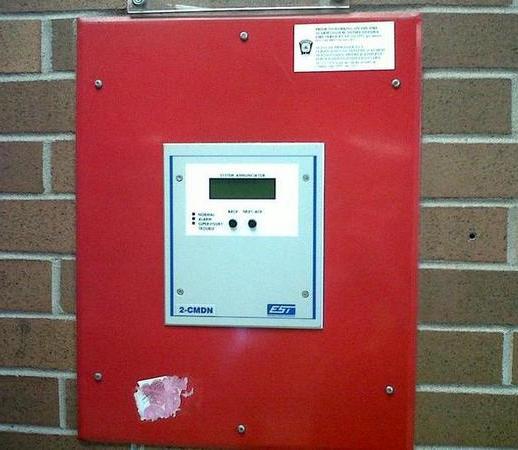 I did not notice whether the initiating devices or signals had been replaced at either school, but I'm almost certain that this is the case (or, at my high school, that these devices will be replaced once construction on the addition is complete). My high school would particularly benefit of such an upgrade as audibility was problematic in certain areas; additionally, in such a large building, it would seem far more practical to have a fully addressable system rather than to retain conventional zones in the original part of the building.
My fire alarm photos
Top
Post Reply
1113 posts