Got a chance to go Visit Timberline Lodge yesterday. I took some photos of the alarms there 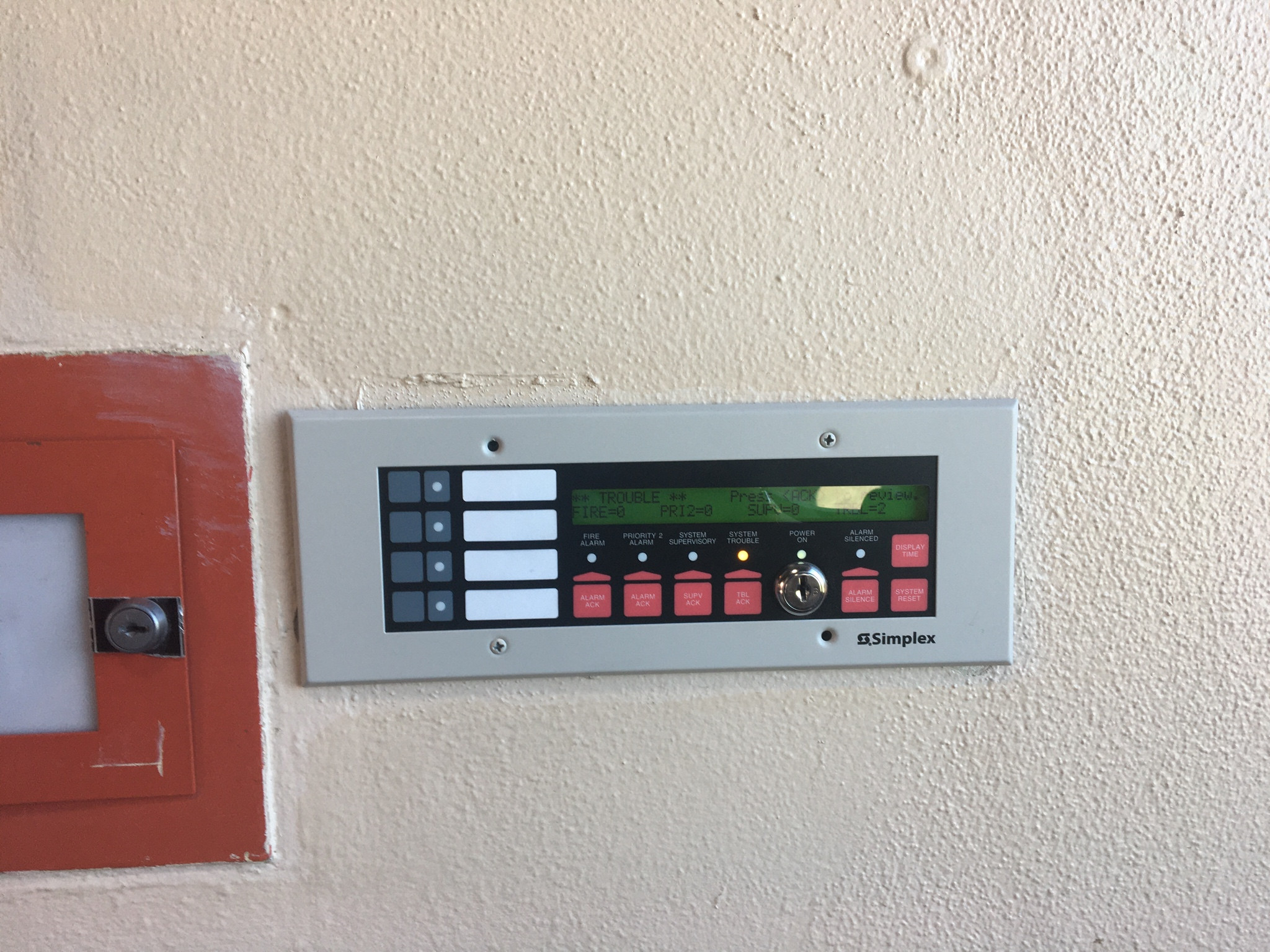 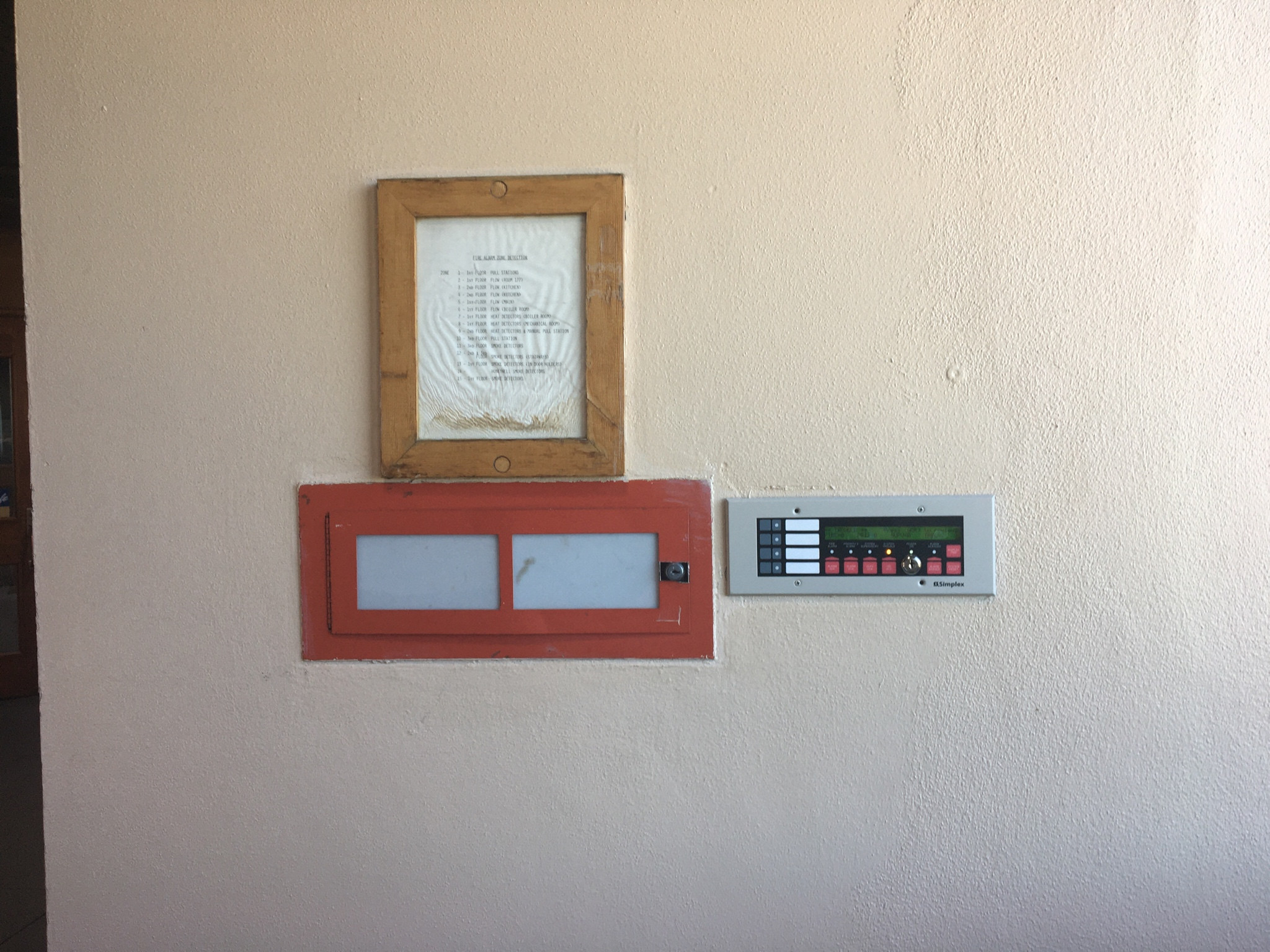 It appears an older simplex system was previously here, judging by the red annunciator thing next to it. That wood frame above it has the system’s zones on it. 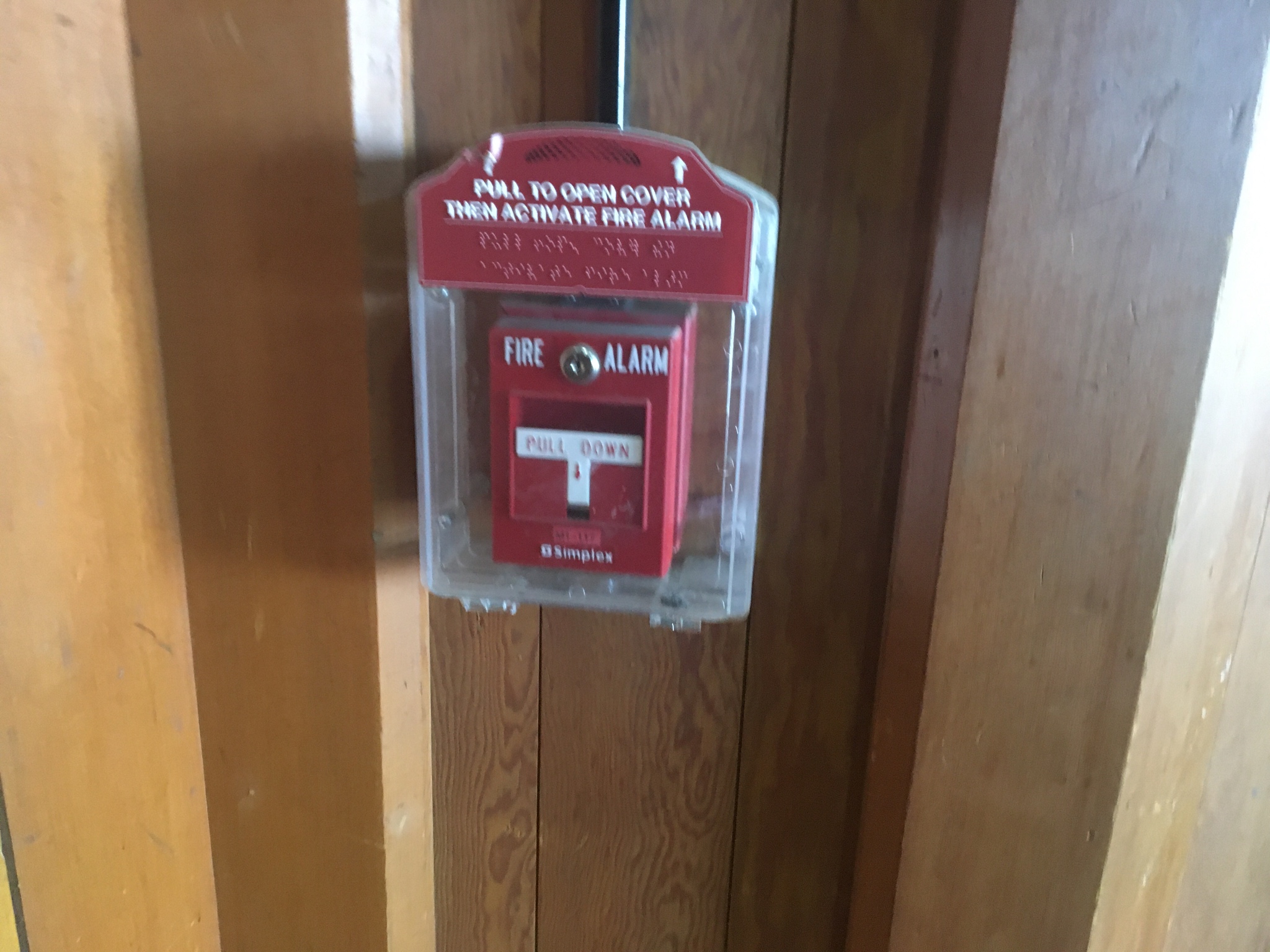 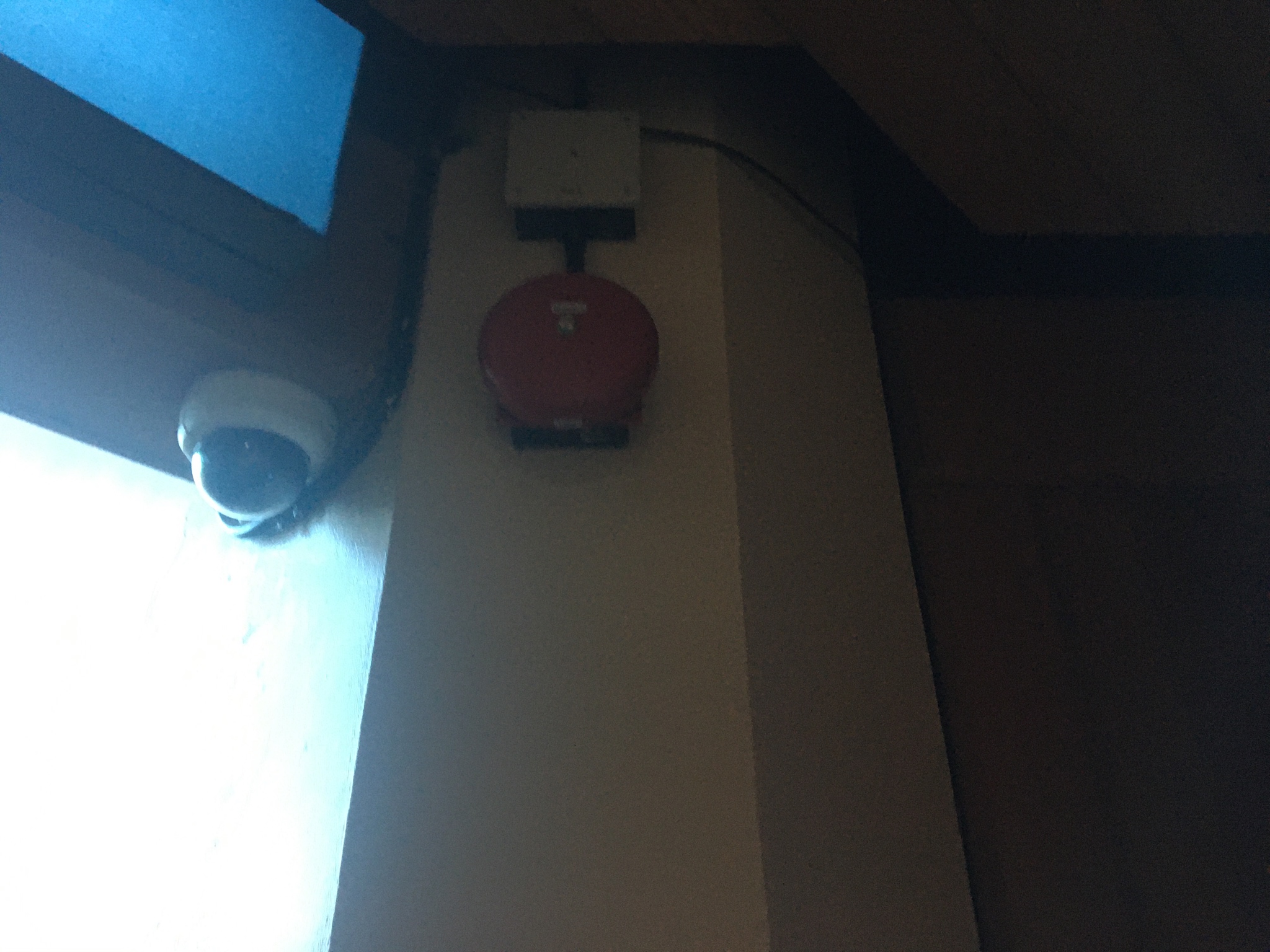 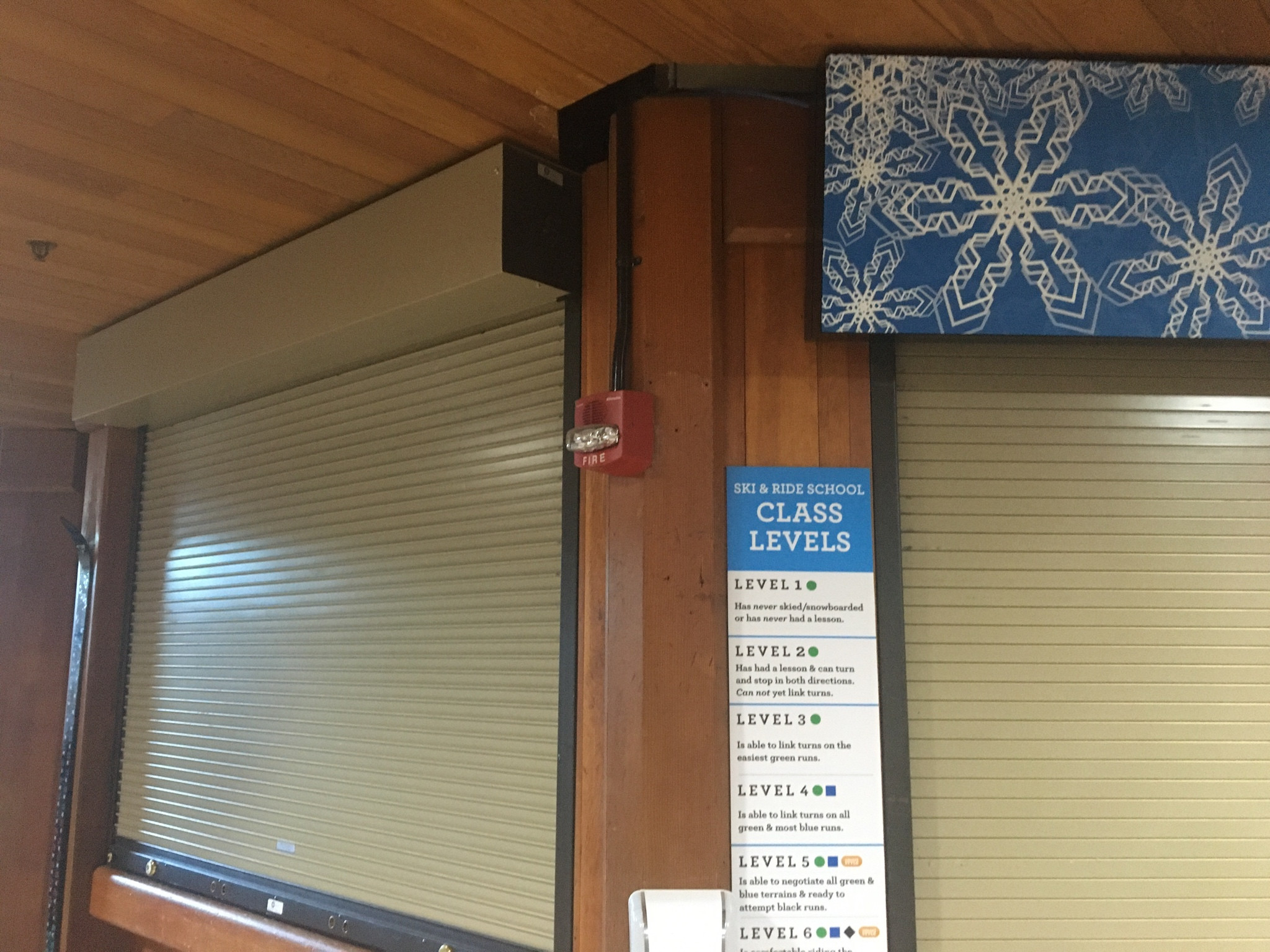 The alarms are simplex addressable TrueAlert horn strobes. There’s also a few white remote strobes and horn strobes, and a few ceiling mount horn Strobes, not pictured. Also not pictured, there’s a simplex TrueAlert Addressable Controller With a bunch of Mt.Hood and Timberline Lodge related stickers on it.

That annunciator is not compatible with the 4010 or 4010ES. It only works with 4100-series panels.
Posting fire alarm systems from eastern Massachusetts (and a few other places) since 2017. he/him

I'm just gonna get all of the elementary schools I've been to out of the way.

Smith Elementary was opened in 1972 and when I went there in 2005 there were no visual NA's (I don't even remember if there were any pulls in the building other than the 2006 edition and the portables). The fire alarm came from the PA's, sounding like a security alarm. The 2006 edition had white ceiling mount AS horn strobes and RSSes. The portables had Gentex Commanders and white Spectralert Classics with Gamewell Century pull stations. They also had a couple H12/24's outside the portables.

Andre Elementary has a Siemens MXL system with FP-11 smokes detectors and Siemens MS-51's with stopper covers. The main alarms were U-MHU-MCS-W's and U-MCS-W's. The front of the school has a U-HN. Most of the portables have U-MHU's and U-MMT's, but the portable I had class in has a Wheelock MT-24-LSM (It was wall mounted by the exit but in the middle of school year they placed It on the ceiling in the same spot) and LSM's in the restrooms.

Warner Elementary opened in 2007 with a Fire Lite System and SD355's. The school also have Fire Lite BG-12's. The alarms were System Sensor PC2R's and SCR's (The classrooms are open concept, so the horn strobes and strobes are placed in a checkerboard-like pattern). A Spectralert Advance horn can be seen at the front of the school. There are also white wall mount Spectralert Classics mounted on the ceiling in the portables.
"I didn't say it was your fault I said I was going to blame you."
Top

So it seems that Greenfield Central Junior High School was caught up in the news for reopening during covid, and oh boy did they have to quarantine because one of the students wasn't tested.. yeah so i think for punishment i'm gonna leak their fire alarm information sorry dudes /j

The school appears to have a Fire-Lite system, with both types of Wheelock MT. Some areas have ZNSes. Smoke detectors are Siemens ILI-1Bs in some hallways, and regular SD-355s in other areas... hinting at an older Cerberus system perhaps. Pulls are BG-12.
blm // he/him
Top

I have a new update for Livonia's Webster Elementary School. It has been about four years since I visited the school, and during that time, the alarm system was replaced as part of the Livonia Public Schools' 2013 bond proposal.

All of the rebranded Faraday NAs and 641 pull stations from the 1990s are gone, replaced by National Time CXLP speaker/strobes, C2-series strobes, Digicomm smoke detectors, 540-series single-action pull stations behind SigCom Sentry protective covers, and a National Time 902 panel. The old National Time P806 bells inside the school are gone also; either they were plated up, or in the case of the former gym bell, the housing was left exposed. However, the National Time bells outside are still intact, but are most likely disconnected as there are new public address speakers next to them.

With the upgrade, almost all of the LPS buildings have identical systems to the one at Webster, with a few exceptions: The former Cass and Marshall Elementary Schools, which are leased and still use their 1990s National Time systems; and the former Dickinson Junior High School (also leased), which is the sole remaining LPS building to still have its vintage National Time system.
Top

Children's Dental of Waltham - Waltham, MA
Panel: Fire-Lite MS-5UD, at the back entrance. There's also an ANN-80 annunciator at the front entrance.

Something like two years ago I speculated what devices my local mall would install as part of an expansion project to convert a defunct Sears store into additional, smaller stores.
To recap, the mall has a c. 2004 Simplex 4100U system with Wheelock E-series speakers and speaker/strobes (mostly E-70s and E-90s, but a few E-50s and E-60s in some newer stores). In any case, the new mall corridor also has Wheelock E-70s, but mounted next to every E-70 is a xenon Exceder-series strobe. The strobes are red and the speaker/strobes are white, but they're both marked as "fire".
The speaker/strobes are all mounted on backboxes, so I wonder if there was some sort of construction mix-up and the speakers were added after the Exceders were, or if the E-70s were meant to be spec'd as speakers and not speaker/strobes but someone got the model number wrong.
As for the other stores in the addition, the DSW has Simplex TrueAlertES ceiling-mount speaker/strobes (or possibly horn/strobes, since they look the same). The HomeGoods also has TrueAlert (non-ES) ceiling-mount horn/strobes or speaker/strobes. There are two other stores in the addition that I haven't had a reason to go to yet so I don't know what they have, but if I had to wager a guess I'd say TrueAlerts. My assumption is that all of this is tied in with the 4100U, but it's also possible that the stores have their own systems.
Top


The High School I attended in Cypress used a Cerberus Pyrotronics MXL system with MSI pulls+stopper covers. The main hallways have what I guess are the ceiling mount versions of the CP MTL horns on continuous (they look like Wheelock E90's with the four screws) and CP S17-F strobes. Few of the strobes were replaced with Siemens U-MCS's and white ceiling ZR's, but there were also some in the restrooms that were replaced with Siemens U-MMT's. Wall and ceiling mount CP speakers are in the auditorium and cafeteria and set to slow whoop (no voice). Most of the classrooms have CP branded Wheelock MIZ-LSM's set on continuous. One of the MIZ's was replaced with an RSS and another by a Siemens U-MHT. The older gymnasiums and the back exit had ceiling mount MTL horns(?) that were disabled, so they also used U-MHU's and U-MMT's. The Arts/Music section and an additional gymnasium had white U-MHU's and MCS strobes. Some parts of the science wing have Siemens ZR-MC-CW's near the MTL-C's with ZH-MC-CW's by the exits and some classrooms in that section. The outdoor alarms are mostly U-HN horns along with some Wheelock AH-WP's and a Faraday 6120. I do believe the smoke detectors were CP DI-3's and FP's.
"I didn't say it was your fault I said I was going to blame you."
Top

The showroom has a Suttle SE-171 telephone ringer bell. Other than that, there are no other active initiating/notification appliances. However, there was a Schwarze bell, an unidentified manual trip bell with a 4" gong, and an old telephone bell (2" gong) mounted on a box with a lightbulb, all of which I believe were sale pieces.

Livonia City Hall (Livonia) - This was an entry I submitted for the old forums prior to them becoming corrupted. Since the last time I visited, the entire system was replaced, and I'm even more surprised with what they went with!

Detectors:
>The old system had System Sensor 1400-series ionization detectors carried over into the current system. I don't recall that that were any other old smokes from the original system.
>The new system consists of Potter PAD100-series photoelectric detectors throughout the building.

Notification appliances:
>The original system used National Time 411F horns throughout, including at least one National Time 541 horn in the Annex; the current system uses Potter HS24-series horn/strobes and strobes, which are actually rebranded Gentex Commander units. Some of the devices are mounted on red trim plates where the National Time horns used to be.
Top

The system at a shopping centre near my house underwent an upgrade at some point in the past few months.

The mall opened in 1983 and likely had a Honeywell or Electro Vox voice evac system at the time. Pull stations were Honeywell FM950KBs and signals were Electro Vox EV027CT speakers (rebranded Atlas Sound VT-series models). In the late 1990s or early 2000s, the system was upgraded to a Cerberus Pyrotronics MXLV; FirePrint smoke detectors were installed throughout the building, but the original pull stations and signals remained in place. The MXLV can be heard in this video (not my video).

From 2013 to 2016, the mall underwent a massive renovation and expansion. The MXLV was expanded to cover the additions, and an RCC-3F annunciator was installed at one of the new entrances. Signals in the new parts are a mix of Siemens-branded E50 and E60 speaker/strobes with bilingual lettering (along with their remote speaker versions) and Siemens-branded ZRS remote strobes. Initiating devices in the new part of the building were FirePrint smoke detectors and two-stage Siemens pull stations with bilingual lettering. The initiating devices and signals in the original part of the building, however, remained untouched.

A few weeks ago, I was at this mall and noticed that the FirePrint detectors (both in the original parts of the mall and in the 2016 additions) had been replaced with OP921 detectors. Additionally, the RCC-3F annunciator in the 2016 addition was gutted. This leads me to believe that the new system is a FireFinder XLSV/Cerberus PRO Modular. The pull stations and speakers in the original part of the mall remain untouched; I wonder if they will be upgraded in the near future.

I'm particularly surprised that the conventional initiating devices were not upgraded in 2016 and that the MXLV was expanded (rather than being replaced) at that time. The MXL product line was already on its way to obsolescence at that point, and it's surprising that such a large building would retain its original conventional pull stations.
My fire alarm photos
Top

The Henry Ford Museum (Dearborn) - The majority of these devices can be viewed with Google 360 imagery. I was there in person today.

Small rooms and offices (which previously had nothing) now have ceiling-mount Genesis remote strobes - the regular kind, not the LED version.
Posting fire alarm systems from eastern Massachusetts (and a few other places) since 2017. he/him