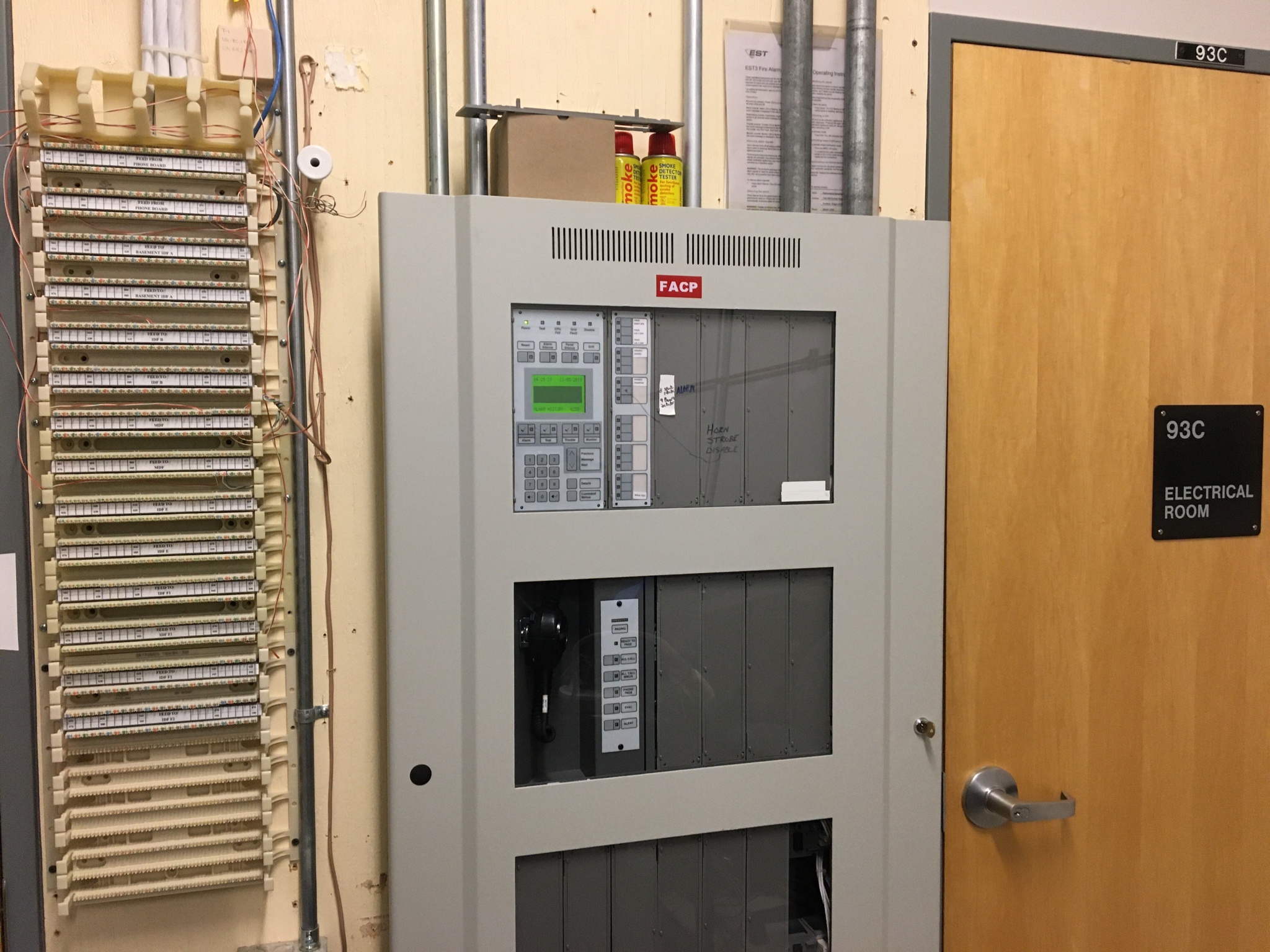 A closer view of the EST3 panel at my high school. (I had to censor out the name of the school on the LCD, and a phone number written on that label on the right corner. I did it for privacy reasons, the LCD isn’t normally blank like that)
”what is your major malfunction; numbnuts?”
-R. Lee Ermey
Top

Simplex 4051 wrote: ↑
Fri Dec 06, 2019 12:33 am
How did you come to the conclusion that there were originally 7001(T) horn/strobes there before? Was there any sign keft that they were there before they installed the Wheelock MTs?

They are mounted on weatherproof backboxes that are just the size for 7001(T)s. Plus, Wheelock's RP-Rs are just the exact same size as the 7001(T)s.
Top

Yeah that would end up being a pretty good guess with all the evidence. I have to admit I am also known to take guesses on what alarms were in a building before an upgrade.
I'm exclusively on Skype now. Add me at amazee_dayzee. I don't do voice or video chats though.
Top

Mission Health Medical Center (Livonia) - This system description was originally posted on the forums prior to them becoming corrupted.

(Note before I begin with my next noted locations: Teddy's Outlet in the mall does NOT have the same system ! ! !I only noticed because before It had its grand opening I peered in and thought I saw AS horn/strobes. Devices are Radionics rebranded MTs and nothing else seen)

PANEL: Unknown but most likely a Fire-Lite addressable or a Johnson Controls Metasys as a addressable keypad was noted by the doors (I did not glimpse the brand.)

PULLS AND SMOKES:
Johnson Controls BG 12LXs. (For some reason In the entrance hall there is 2 within 5 feet of each other)
No smokes seen

Spectralert Advanced Horn/strobes.... Think about that... in a Hospital... and also ceiling mount advance in certain areas

Charlotte Childrens theatre (I found this place walking around Charlotte and decided to see what it had in store!)

PANEL:
Unknown but most likely an EST 3

NOTIFICATION APPLIANCES:
Simplex 2902-9739 speaker/strobes in hallways
On the top floor in the elevator lobby there is a single 4903-9142 mounted like the former 2902-9739 that sat there before
On the top floor in the same lobby there is a internet server room that has a Fenwel Halon Wheelock RSS next to the door
Rooms have a single 2902-9734 above the ceiling fan(s) in each of the units living rooms
Household smokes in bedrooms
not really active anymore
Top

Hey if they feel like the population of elderly people is too much, all they need to do is send the ones with a weak heart to the hospital and do a fire drill. XD
I'm exclusively on Skype now. Add me at amazee_dayzee. I don't do voice or video chats though.
Top

This building is quite small (less than 30,000 square feet). I don't understand why the system is voice-evac or a 4100.
Posting fire alarm systems from eastern Massachusetts (and a few other places) since 2017.

Some system that I have seen recently!

CVS/Pharmacy (Cox Road, Gastonia NC) by the "bee hive" Spectralert hospital so patients can grab pills and meds and stuff (I came here to buy some cassette tapes):

INITIATING DEVICES:
Grinnell Rebranded RSG-RMS-1T by front panels
Back fire exit has an FCI-MS-2 by the door
No smokes seen

FedEX in Dallas NC in the "random" part of town that is filled with factories:

McDonalds on Franklin square, Gastonia (I have been here before and it never had a system. It JUST got a system!):

INITIATING DEVICES:
Empty red backboxs with stoppers over them (As they are getting the system installed)
No smokes

Wait. You are telling me people still buy cassette tapes? I did not know that.

I shadowed a an elementary music teacher (school not disclosed for privacy reasons) yesterday for an over-break assignment. I had been in the school before, but it has been YEARS and there have been some renovations and additions to the original buildings (1976) since then. I knew the system was Simplex, but here's the full rundown.

The original school opened in 1921. The only remaining part from the original is a 1963 classroom wing addition (now houses grades 4-5 , special ed and "specials"--music, art, etc). The rest of the school was rebuilt and opened in 1976. 1976 classroom wings (K-3) were originally the open-pod type; only Kindergarten still has a fully open pod. The other pods now have folding wall dividers added (probably) in the 1990s. The walkways between the buildings were enclosed into hallways in 2016 and fire doors replaced the existing exit doors.

Control Panel---Simplex 4005--Main Office, replacing the 1976-installed 4207 or 4208. Installed June 1997! Simplex wrote the date on the framed operating instructions sheet next to it.
No remote annunciators.

Notification Appliances
Simplex 4051 horns---1976 classroom pods, hallways, offices and main lobby (flush mount) and 1963 buildings (surface mount).
Simplex 4051+4050-85 horn/lights---cafeteria and multi-purpose room (gym/auditorium).
Simplex 4901-Series rectangular horns on 4904-9104 ceiling strobe plates (ceiling mount -9105 strobes)---1976 classroom pods with folding walls. Probably installed with the 4005.
Simplex 4903-9252 15 candela horn/strobes---2016 enclosures/additions. The enclosures I went through only have 1 horn/strobe in them.
No remote strobes to be seen, but that doesn't mean there aren't any.
No exterior alarms visible.
Coding is probably continuous or temporal; I haven't heard the system in alarm.
--

Clock system is a Simplex 6400. Clocks are your standard, round Simplex fare. Not sure what the PA system is, but classrooms have Bogen wall speakers. Hallways have 8" round speakers with no external branding.
Steven Davis
K-12 Music Education Major, Class of 2021
2020 Drum Major
Principal Chair Bassoonist
Self-Proclaimed Orch Dork

I found my old Middle school christmas play cassette tape but the reel broke so I had to "extract" them out into a new tape. (And also because nostalgia/mixtapes.)
not really active anymore
Top

This evening I was invited to my parents workplace's Christmas party at the company owner's house. Here is the system of the house:

PANEL:
A*T Keypad by front, front, front, front door (Yes. There are about 4 exit doors in the house. As a matter of fact it is EASY to get lost in their home's complex halls)
IMI keypad by Gameroom (Air hockey/arcade/hangout area)
IMI Remote keypad (Only 3 buttons) in their teenage daughters bedroom

When you said system there, for a moment I thought that you meant that they had a fire alarm system. LOL
I'm exclusively on Skype now. Add me at amazee_dayzee. I don't do voice or video chats though.
Top

Value Village in Charlotte next to Cash America Pawnshop:

PANEL:
Unknown but most likely a Potter or ESL

PANEL:
Most Likely a Silent Knight as noticed by the SK Keypad by the doors

Food-Lion:
Panel: Fire-Lite MS-5-UD or a 10-UD
Annunciator is a ANN by managers office doors