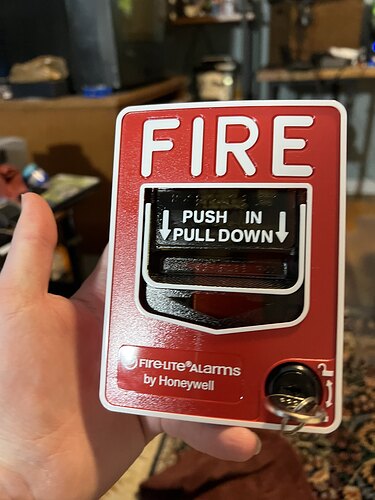 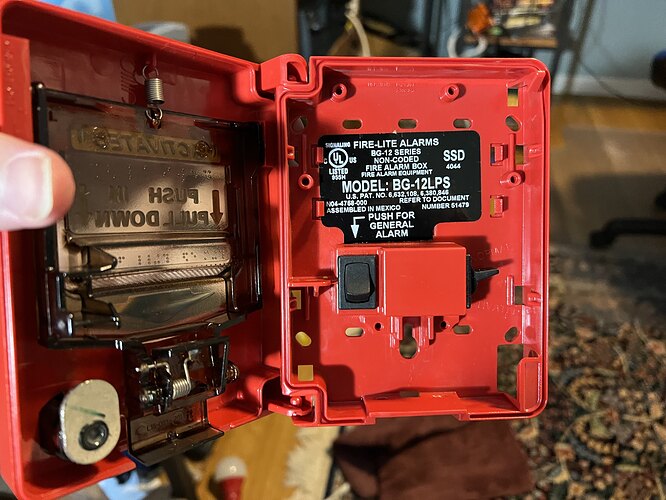 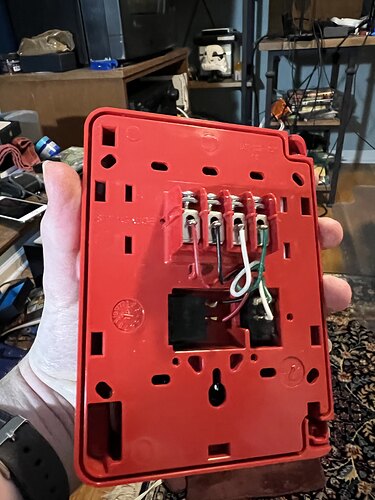 Ooh, yet another device I never knew existed! Interesting how the two-stage switch is a standard switch & not a key switch, though I suppose that’s because the station’s lock prevents it from being accessed without the key (compared to most other two-stage pull stations which have the two-stage key switch accessible while the station’s closed).

I’ve seen System Sensor make single action BG-12s, and I thought those were quirky, and uncommon.

Interesting find! They’re probably as rare as they are because they almost never get installed - most systems installed new today are not two-stage. Most systems these days are either general alarm (i.e. any device will dump the whole building) or phased/delayed evacuation (i.e. active floor, plus one below and one above).

If, say, you were working at a DOD facility or prison where you don’t want to immediately dump the building once the alarms come in, the system would either be set up so that a smoke detector starts a silent first stage but a pull station will immediately initiate general alarm due to it being a manual override, or in a prison, you may have key-locked stations at the onset.

These days you don’t see many pull stations at all unless you are in an occupancy where they are explicitly required. Current editions of IBC allow for several exceptions of pull stations being omitted or only one being required. Remember that NFPA 72 doesn’t tell you when to install a device, only how you must install a device.

That is actually really cool! I guess you can open it if there’s a general emergency (like an active shooter) and hit the switch that says “GENERAL ALARM”

You don’t know what two-stage is, do you? Allow me to explain:
Two-stage systems work thusly: when one device goes into alarm, the system enters first stage, where the signals will usually pulse slowly (or in the case of a voice evacuation system a standby message plays), often without the strobes flashing, letting occupants know that there may be an emergency but to standby for the time being until it’s verified.
When another device is activated (or a two-stage switch is activated like the one in the BG-12LPS), the system goes into second stage, where the signals pulse normally (or in the case of a voice evacuation system the standby message switches to an evacuation message) & the strobes flash, telling occupants to leave the building.

Two-stage systems are often used in places that get (or are expected to get) frequent false alarms or buildings where evacuating the whole structure for any alarm would be a bad idea (such as in a skyscraper where the stairwells would most likely get clogged with so many people evacuating all at once).

Carson, Henry, keep in mind that not everyone is immediately familiar with every fire alarm concept. The concept could have been explained to them simply.

Notifier makes a bilingual pre-signal version of that, the model number is nbg12l-psp