A Home Depot in San Jose, California was destroyed by fire

For some reason, the store’s sprinkler system failed to control the fire. Why is this?

I have no idea honestly, it should have worked properly. There are at least two reasons I can think of:
#1: The system activated like it should but failed to control or extinguish the fire for whatever reason (obstructed sprinkler head, fire too big or hot, etc.)
#2: The system didn’t activate due to an issue (closed water control valve, broken pipe somewhere in the system, improper or nonfunctioning bulb, etc.)

That’s awful news. To think after all the trouble we go through putting in monitored fire alarms and automatic sprinklers that these horrible things still happen. It’s sad.

Ditto on Carson, there’s no telling because we weren’t there. Maybe the fire detectives will generate a report and we could read the news article. Unfortunately, I’m not a Fire Sprinkler technician, so I have no clue. I assume all annual inspection and regular maintenance was performed, but I could be wrong, depends on the inspector and whether or not they did their job correctly and to NFPA Standards or not.

[Several customers] also say they could smell smoke and hear loud calls from Home Depot workers telling people to evacuate because of a fire well before they heard any alarms.
“My first comment was to the person behind me — why isn’t there a fire alarm?” customer Jeff Baham tells the Mercury News. “If you were in the back of the store and for some reason waited until the alarm went off, it would’ve been dangerous or maybe they wouldn’t have made it out,” 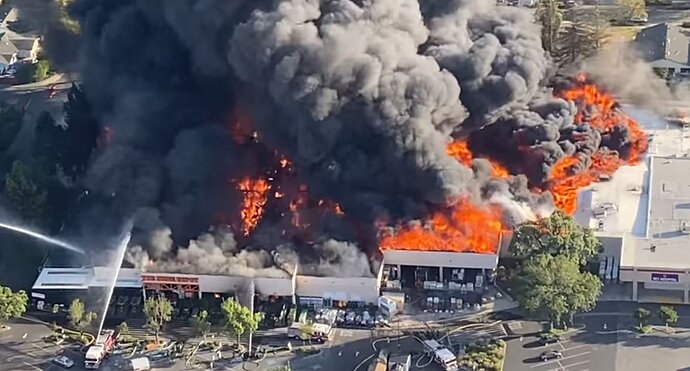 Investigators are still looking for the cause of a huge fire that destroyed a Home Depot store off Blossom Hill Road in South San Jose over the weekend, and concerns have been raised about alarms and sprinklers that never went off.

So, going by this I guess the store didn’t have a functioning fire alarm system either. What the heck happened to its’ two most important life safety systems? (unless someone just didn’t think to activate the alarm)

unless someone just didn’t think to activate the alarm

Not like they could… big-box stores have a tendency for omitting manual pull stations.

From what I’ve seen I think most Home Depots & Lowes’ have pull stations by each exterior door as well as one directly below the keypad/annunciator, so there should have been at least one that could have been used to activate the system manually. Also from what I’ve seen it seems most Home Depots & Lowes’ don’t have smoke detectors in the main areas of the building (don’t know why: a lot of places I’ve been to don’t for some reason, even though there should be nothing preventing their installation), so that would explain why the system didn’t activate automatically either.

In your area maybe.
In other areas, many big-box stores do not have any manual pull stations except for one in a non-public area.

That’s probably because they’re much newer than those I’ve been to & thus the system designers went with the whole “we don’t need manual stations anymore because automatic detection is reliable enough” thing. Fires like this one show why such a thing is stupid (& downright dangerous).

Walmart and Target stores in my area are not so big on pull stations. Home Depot and Lowes stores typically have plenty of them.

Yeah, most of those stores I’ve been to have been about the same way: virtually every Walmart I’ve been to have had seemingly only one Bosch-rebranded Sigcom t-bar near the fire keypad, while Lowes & Home Depot usually have more than one pull station.