In the gym at my school there is a dual-action pull station which looks like a Bosch FMM-325A-D but has “Bay Alarm” lettering on it. Also of interest in the gym are some Faraday/FOS 5347s and a crookedly-mounted Edwards 270 pull station

(I don’t have pictures because phones aren’t allowed during class times and I never stay late to take pics.)

More than likely “Bay Alarm” is a local fire alarm service company where you live, sometimes the service company puts their logo on the pull stations in place of the actual brand. You won’t know who actually made them unless you opened one (though this I would not recommend as doing so would set the alarm off, so don’t do it without explicit permission from school staff).

The Faraday/FOS 5347 is very interesting, since so few buildings have alarms like it. As for the crooked 270-series, not sure why it’s hanging like that, without a picture I can’t really know what might be wrong with it.

What about the rest of the system?

Bay Alarm pulls (at least the ones I’ve seen pictures of) are rebranded Sigcom ones.
Many companies rebranded these - even Simplex does so for outdoor applications.

Yes, but Bay Alarm may have gotten them from another company that rebrands them from Sigcom.

The rest of my school’s system is comprised of mainly Simplex devices, including some Simplex T-bars. I have absolutely no clue what type of FACP is there because we are not allowed in the room with the FACP (obviously.) Besides the Bay Alarm/Sigcom pull station and the Edwards 270s (which are all throughout the gym building now that I look closer), the Simplex T-bars are almost the only pull stations at our school. There are some detectors, but I can’t identify them because I don’t really have time to look at alarms during the school day.

If there’s an annunciator somewhere in the school, you might be able to guess what panel the building has going by the make & model of the annunciator.

Because I have a little time to look at them between classes.

Also the notification appliances are Simplex TrueAlert horn/strobes, FOS horn/strobes and Wheelock MT horns. Also, there are a few Gentex Commander 2 horns and a Potter FA-50 or one of its rebrands.

Neat, seems like a pretty diverse system. An FA-50 huh? I’ve know those to also be branded as “Unitec”, “Spurling”, “Honeywell”, & “Harrington Signal” (I actually have the Unitec-branded version myself).

There’s also a Radionics annunciator at the door to the gym building.

Aaaaaaand a Wheelock MT horn/strobe, clearly meant for use on indoor ceilings, mounted about 30ft up on a wall on the outside of an academic building.

I know there are weatherproof MT models (though that may only be the case with the newer MT-24MCW horizontal strobe versions). Ceilings huh? Does that mean it has ceiling-mount lettering?

Yes, the lettering is sideways. This specific MT doesn’t have a weatherproof back box, even though all the other MTs at my school have back boxes.

And, it has an older-looking strobe.

Weird, it certainly won’t last long without one though (unless it’s already stopped working).

So, I guess a vertical strobe MT? (never seen one that has ceiling-mount lettering & that’s weatherproof though)

The last time there was a fire drill at school, I didn’t see the strobe flash at all.

Ah, that might mean that the strobe has stopped working at least. Was it sounding though?

I couldn’t tell due to all the other alarms nearby.

Update: I managed to sneak into the gym after school and took a picture of the device! 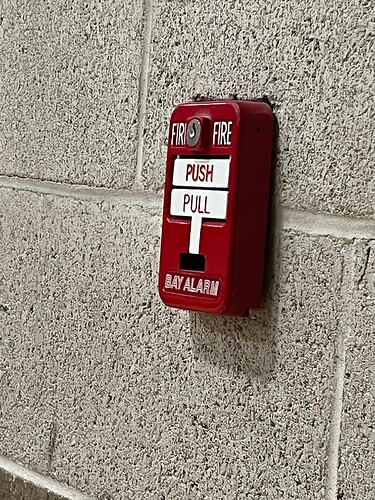 Neat! The font used to write the “BAY ALARM” text on the bottom reminds me of that used in the CNN, Sega, Sears, & former FDA logos.