Starting around 2008, I began to notice a few places that had the same type of alarm signal I remember from my childhood: the Simplex 4051 (or 4050) horn on the 4050-80 light plate, installed in a somewhat different manner. Rather than the horn sticking out a bit as we usually are familiar with, this type of version has the horn pushed in further, so that the edges of it line up with the retrofit plate! 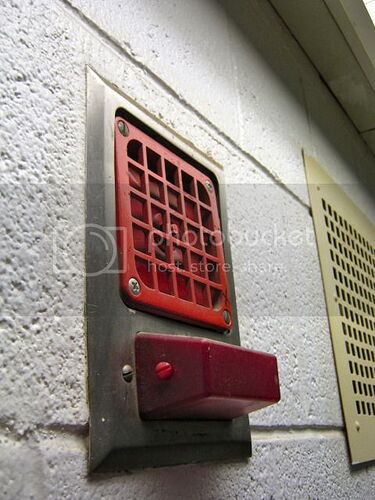 I don’t see this version quite often. There are only a few places I know with this version. There is the local courthouse in my city (old courthouse), which has these very same alarms, but most of them are on large backboxes, yet they are still installed this way. The pulls are the older Simplex 4251-11 “Chevrons,” which means this is a really old system, most likely from around 1971-1972. There is also Hemenway Hall at Framingham State University, which has these in a section of the building that was built in 1972 (pull stations are the classic 4251-20 T-bars; the 1962 wing has an old Gamewell system with Vibratone 350 horns, and a small portion of the 1972 wing has newer 4903 alarms, but currently the whole building is going to be expanded and renovated.) The K-8 school on the north side of town has this version as well, built in 1974 (Simplex 4010 and 4208 system), along with the former high school “B” building (also renovated in 1974 with Simplex 4208 system, it is currently used as a charter/alternative school.) Additionally, several of the alarms at the Art Center at Bridgewater State University are like this (renovated in 1974, the current panel is a Simplex 4002, pulls for this and the former are break-glass 4251-30s.)

I have reason to believe that this is most likely an earlier variation of their light plate series. I am saying this because the courthouse and Hemenway Hall’s Simplex systems are from the early 1970s, back when the light plates first came out. However, the BSU Art Center has some of these, while the other alarms in the building are the version with the horn sticking out a bit as usual. Additionally, the other K-8 school built at the same time as the one previously mentioned (it has the same floorplan, and this is the one that I went to for kindergarten) has the version with the horn sticking out. So I imagine the version with the “sticking out horn” first came out around 1974, and the older version by then had been discontinued, so they were installed as new-old-stock in those mentioned places.

Now, I’m sure quite a few of you know how Simplex 4050-80s sometimes had black “FIRE” lettering on the lens, and some were blank. Well, most of these early 4050-80s usually had blank lens, but at that K-8 school, there are three of them with WHITE “FIRE” lettering! 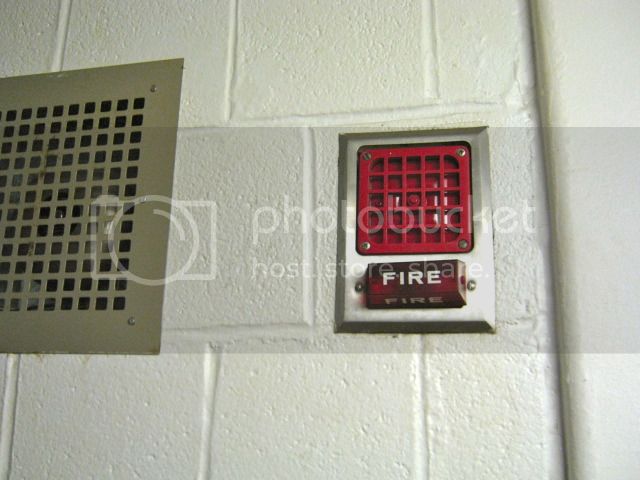 It must have something to do with the brackets for mounting the horn in this so-called early version. I have seen them on the usual surface-mount backboxes 4050-80s get installed on during a retrofit/upgrade, and the horn is still lined up with the light plate: 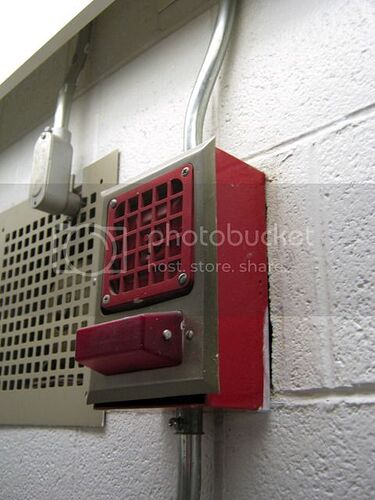 
Anyone else know something about this?