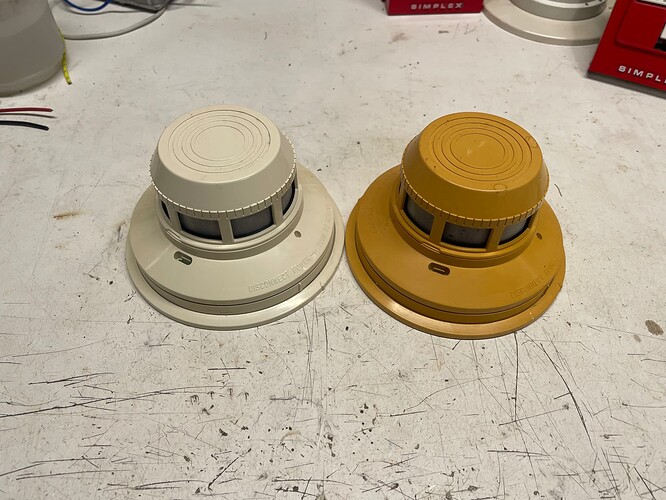 image1920×1440 258 KB
I finally got around to testing the FCI SBS-1201 smokes I got from the FCI FC-72 system back in June, and decided to do a side by side comparison of the most yellowed smoke versus the whitest smoke. The yellowed smoke came from a hallway next to a window for 32 years, the other one was in the elevator machine room, with little UV exposure. Surprisingly they both still test good, even the yellowed one.
1 Like
TheCarson116 November 16, 2022, 4:22am #2

Neat comparison! In a similar fashion I’ve got 3 BRK 1769ACIs that are of varying degrees of yellowedness.

If you want to try to remove the yellowing, what you could try is a retro-brite procedure. It’s something collectors do to game consoles and vintage home computers to reverse the effects of UV yellowing, though with something this severe I’m not sure it’ll completely restore that detector.

There are several videos explaining how to accomplish this, but the way I’ve done it (I’ve done this to a yellowed RSS cover plate) is to fill a gallon-sized ziploc bag (best if it has an actual zipper) with hydrogen peroxide, completely remove all the electronics from the detector, submerge the detector housing in the hydrogen peroxide, and leave the bag out in direct sunlight for at least eight hours. Then come back, rinse the housing off, and it should be less yellow than before.

I’m not sure how well it’ll work with your detector, but I’ve seen even severely yellowed plastics look more or less normal after this treatment.

Oh let the detectors stay yellowed: it’s a testament to both their age & their years of service (on top of that I have read that trying to un-yellow plastic will often make it brittle).

Thanks for the suggestion, I watch The 8-Bit Guy on YouTube so I’m very familiar with different methods of retrobrite, but I won’t do that to this detector. I have never seen a smoke detector turn almost brown from UV exposure, so I’ll keep it as such. Also makes a good conversation starter.

I’ve always found it interesting how detectors like that always look yellowed. Even when they aren’t UV damaged. Are they that yellowed brand new, or do they look more white?

The non-yellowed smoke is about as white as it would be new. It’s more a a beige color, much like vintage computers.

I always love the detectors that are half yellowed and half normal. I have come across a few like this, where one side was exposed to UV and the other side wasn’t.