Have you seen these alert strobes before?

Have you seen these blue LED Wheelock alert strobes in public before? 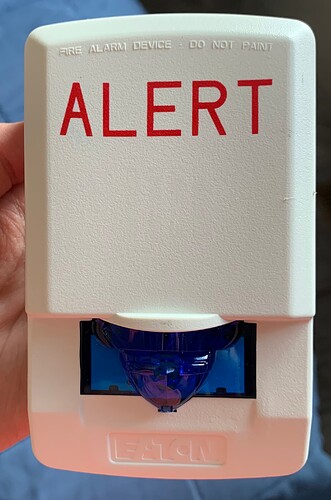 The image doesn’t seem to be displaying correctly.

It should be showing now. I included the model number incase it doesn’t.

Alright. No, can’t say I’ve seen one of those, though I believe the standard lens color for “ALERT”-lettering devices is amber. Not sure what blue would be used for. Have you seen at least one in public?

No I have not. That is why I was asking if anyone else has seen them before. Quite interesting. I’ve had this device for a little over a year now and have never seen it before.

It’s highly unlikely that such a device would be seen in public or used in an actual system, given the aforementioned non-matching lens color & lettering.

Yeah. I asked someone from Wheelock about it a while ago and they said they designed it for a active shooter or lockdown situation.

Yeah I believe it’s common to use blue-lens devices as lockdown alarms in schools & other places.