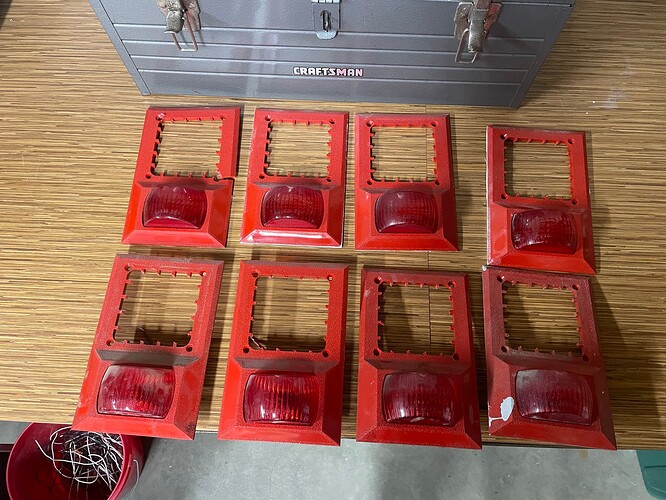 Every day, hundreds of fire alarms are abused around the world by fire techs. For just the very small donation of $0.01 per year, you can help save fire alarms from being abused.

All jokes aside, these were some of the old light plates from a Honeywell FC-72 system upgrade (more on those later), that were molested by a prior fire tech. They used System Sensor MASS241575ADA horn/strobes in a previous upgrade, so they cut out the grill on these Space Age Electronics AV-32 light plates to fit the new horn. They also removed the light/flasher module on half of these, so they’re absolutely worthless to a collector. Really the only thing I can save off of those is the red lens if someone needs a replacement. These are actually a lot older than I thought as well. I thought they would’ve been from 1996 when the FC-72 was installed, but the ones that still have the flasher are dated October 1980, and would’ve had Federal Signal 450D horns (there were 2 in classrooms that still have mechanical horns). I’m not ready to do a full post on this system upgrade as there are still a few pieces left in the old system, but that should be coming shortly.

Shame to hear about all that. Why they didn’t simply utilize Wheelock RP-R trim plates & left the AV-32s alone (albeit removing them in one piece) I’ll never understand. Still, I guess you at least saved what was left of them (& of course if you happen to find light modules for those that are missing theirs you can make them work again too).