Knock-off alarms on eBay or Amazon 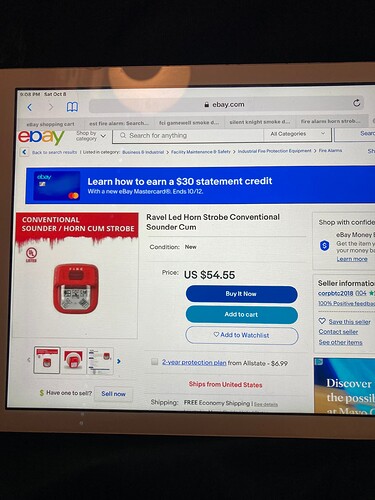 Yeah, Amazon & Ebay both have plenty of listings for knockoff alarms, with most of them being based off the SpectrAlert Classic. That one however appears to be the same as an alarm made by a Chinese company named “Light Engine” that apparently never made it to production (according to another topic Light Engine was seemingly planning to enter the North American fire alarm market with their own line of LED notification appliances some years back, from what I can tell however that never went anywhere).

Yeah I found that alarm while looking at horn strobes on eBay, and along with that alarm I also found some listings for some fake spectralert classics too

Well that’s an unfortunate choice of words for the listing!

I don’t know why they put that in the title & picture either (unless it’s a translation error), though you might not want to know what it means…

Your probably right, they probably had a rough time translating the words in the listing from Chinese to English

I don’t know for sure if that listing was made by someone in China or not, especially since the seller’s location is said to be the US.

I probably would if I had money to burn.

Maybe nic,s systems and electric could durability test it

Instead of a typical horn, it just moans.

Hahaha yeah it probably does

The New “Moan Strobe”!! Coming to fire alarm distributors near you!

You can use the’’ moan strobe’’ with your uphote bg-12

Oh that is what that means, I thought that word was mistakenly put in the listing