Ladies and gentleman, it’s time for another round of Make Up a System!

For starters, let’s take a look around the Nautilus Aquarium, located somewhere in Cape Cod. It was built in the late 1980’s and has a mid-sized Simplex 2001. It is voice-equipped, and its NACs are un-coded.

What horn is in the Space Age AV-34 plate? Newer Faraday horn could mean anything. I assume you mean the 6120s like your college?

Sorry, I meant the newest generation used in the -9219, the GMS, and the U-HN series. My college had one of these, but it’s since been removed and replaced with an older one.

So no Space Age Electronics AV-34 but a Faraday U-HNH horn?

It was like this, but an AV-34 instead of a -32, and it had a silver-plated Faraday horn, which I presume was the U-HN type considering the SAE plate was newer. 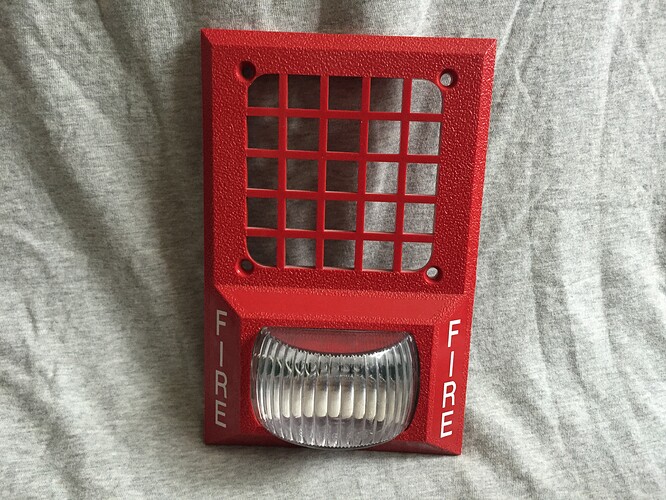 And you don’t know the model number?

The first part of the model number is the plate type. The second part, I don’t know. The third part, I’m not entirely sure about, except that the “C” stands for “clear”, referring to the lens. “TJ24D” is a 120 candela strobe, which seems to be the most common type from that generation. SH24D is the model number for both Faraday mechanical horns and Wheelock electronic horns like the EH-EL1.

As for the original model number of the horn, I looked at the Faraday catalog, and I believe the horn is in the 6230B series, rather than the 6120 series like the old ones.

EDIT The model number for the ones in the made-up system is A34-BL-SFXC-TG24D-SH24D, since they’re 25 candela strobes.

There are three high schools in the city of Slateport - Eastern, Central, and Coastal. This is the newest of the three, and was built in 1979. It has a Simplex 4020, which replaced a Gamewell panel.

The Clyde J. Weston High School was built in 1975 and originally had Simplex 4051 horns in continuous on 4050-80 light plates that blinked in slow march time. 4 years later, the horn in the Carpentry classroom broke down and was replaced with a Wheelock 34 on a Space Age Electronics AV32 which also blinked in slow march time. In 1983, half of the second floor had a fire break out. The alarms in that wing were all replaced with Simplex 9806 horns on 2903 light plates that blinked in march time. The drama classroom on the second floor and the media center also had 9806s replaced. In 1998, the chorus and the weight room has Cerberus Pyrotronics horns installed in them. Then in 2000, the auxiliary gym was redone and had TrueAlerts in continuous installed. Finally in 2004, the computer technology room had a Gentex Commander 3 put in in continuous set on electromechanical horn.

This is relatively small high school was built in the late 1980’s. It had an old Autocall system, which was recently replaced with a Siemens MXL. However, most of the old signals are still intact. The horns are on continuous.

Here’s an interesting one, installed in Fakeville Elementary School:

The main pull station was the Gamewell M69-7 (two stage, key reset) with the dual action cover (installed about 5’6” above the ground)

Panel was some sort of relay-based Notifier panel with 2 stage capabilities.

Considering the audible-only signals and the pre-signal feature, I’m guessing that Fakeville is somewhere in Canada. But when were two-stage systems introduced? I would imagine a feature like that would have been thought up sometime after the era of relay-based panels. But I could be wrong.

Also, 5’ 6" off the ground? Sounds like a major code violation. I need to know which fictional person is responsible for such a shoddy installation!

System Sensor was founded in 1984 though… most major manufacturers moved away from relay-based panels by then. And wouldn’t the system have a Gamewell panel if there were Gamewell pulls? Remember those companies were competitors at the time!

System Sensor was founded in 1984 though… most major manufacturers moved away from relay-based panels by then. And wouldn’t the system have a Gamewell panel if there were Gamewell pulls? Remember those companies were competitors at the time!

I need to know which fictional person is responsible for such a shoddy installation!

It was John Doe of Fictitious County Alarm in Alabama.

Well, I just became the CEO, and he’s fired. Okay, now I resign and appoint you the new CEO.

I have deleted the three posts that contained a bit of role-playing from one particular member.

I’ve received a message from one of the real-world people who was involved in one of the posts saying he was uncomfortable. I was also rather annoyed to see this. We shall have no more of this.

I concur, this has gotten to all kinds of creepy. :shock:

Anyway, I’m in the process of writing a story about what happens when the fire alarm goes off at Starfleet academy. So look for it here soon. It will also be in Barnes and Noble

Bay City Elementary School was originally built in 1974 and the horns that were originally installed were Simplex 4051 horns on 4050-80 light plates. The system was set in continuous and the light plates blinked in march time.

In 1982, the alarms in the art, library and the administration hallway broke down and were replaced with Faraday 6020 alarms that has a strobe on their front.

In 1987, more 4051s broke down in the reading and ELL classrooms and they were replaced with Wheelock 7002Ts.

In 1992, most of the 4051s where replaced with the older Gentex SHG horn/strobes but some still remained.

In 2001, the teacher’s lounge which had nothing in it had a TrueAlert installed in it.

Finally in 2009, the OT/PT room which also had no alarm in it had a SpectrAlert Advanced installed in it.

The only 4051s that remained were the ones in the 4th and 5th grade wing, in the gym and the one in the speech classroom.

I have deleted the three posts that contained a bit of role-playing from one particular member.

I’ve received a message from one of the real-world people who was involved in one of the posts saying he was uncomfortable. I was also rather annoyed to see this. We shall have no more of this.

I agree with this as well. It got creepy real fast.