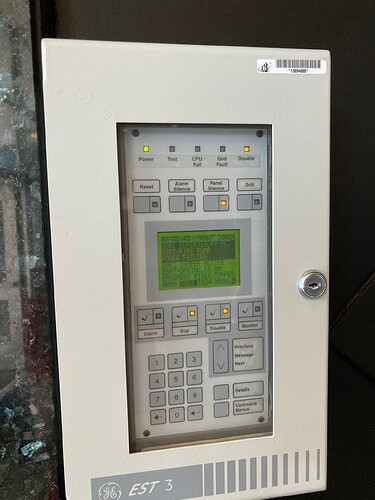 24 troubles!? I have no idea how a system could get that many all of a sudden! Especially odd in that it’s an EST3 & not a QuickStart, the latter of which are well known for having problems, CPU faults in particular.

I’m pretty sure the T024 at the bottom means 24 troubles right? I still find it nuts that the system was completely normal yesterday and this morning it went bonkers. If there actually is 24 troubles, I wonder if there was power loss to half of the system that would cause it considering one of the supervisory faults was a fire pump power loss fault.

Yes, S002 represents the amount of supervisories (2) and T024 represents the count of troubles (24). Based on the fact that the system is in silence, I think the building staff and administration are aware of the faults in the system and are probably contacting the company that monitors and manages the system.

I actually saw the head of maintenance attempting to silence the main annunciator (not the one pictured)…kept hitting alarm silence lmao. The troubles and supervisory faults are now cleared I think. I think it was a power issue with half of the system. If anyone has any other ideas on what it might be let me know! We have a fire drill on Friday at 1:45 I might ask to help out with it.

A few comments. I see that the DISABLE led it lit. Any points that are disabled will show up as a troubles. You mention a power issue. If an a booster power supply looses power, it should indicate a trouble too. You can view the history and it will list all of the 24 points that were previously in trouble and when they were restored.

Fact: that would be 1 trouble per hour, and about either half a supervisory per hour or 2 supervisories per hour.