Most Absurd Description of a Fire Alarm Sound

Well, it’s probably safe to say that not everyone knows about what each fire alarm sounds like, unless they hear it go off for drills or something.

But there are times when there are the most ambiguous or outright strange descriptions of what the fire alarm sounds like. For example, this:

What are some of the weirdest descriptions of the fire alarm you have heard in the field?

I found this one in another topic:

"Bells and sirens" was the sound of the fire alarm according to several teachers in New Britain. We had -9838's :roll:.


Also, in an older post, someone mentioned a hotel where the signage said this: "fire alarm sounds like a bell."

I’ve stayed at a few hotels that very clearly have “fire alarm sounds like” signage that doesn’t match the signals themselves. It seems like the most common sound description in hotels is “a loud siren”, even though I’ve seen that used to describe TrueAlert horn/strobes, Integrities, and Advances. On the other hand, I’ve seen “a loud whistle” at a hotel with AS’s, and “a buzzer” at a hotel with -9838s, so I gotta give those hotels some credit for at least taking the time to listen to their own fire alarms.

Way back when, in the days of Middle School:

“A gentle dinging sound with ceiling flashlights turning on and off”

They had Genesis Devices.

Weirdest description (not to mention partially wrong) I’ve ever seen:

The five minute part is right but the 1:1 High/Low part is totally wrong, I don’t know the exact timings of the AFNOR NFS32001 signal but it is definitely not 1 sec high low pulse.

Another description that I saw was correct but the way it was translated from French to English made it rather weird… Almost looked like Google Translate “Frenglish”.

The generic description in the school district I grew up on seems to be either “a series of blasts” or “a long blast” of “the bell or horn”. My elementary school had the “series of blasts” description throughout my time there, which definitely fit the pulse of the original Standard 30A’s, and I suppose the “skipping” of the V7001T’s in the new wing, but not so much the continuous buzz of the 892-6B’s that replaced the 30A’s. Another school in the district currently has the “long blast” description, but I highly doubt that’s accurate considering they have a modern voice evacuation system.

The maintenance guy at the library where I work always refers to “bells and whistles” when testing the alarms, which are U-MMT’s set to code 3 horn. Not the most accurate description, but I guess that’s just a generic term for things that make a lot of noise.

Then there’s one that’s not inaccurate, but just plain funny: someone in my first high school said the alarms (Wheelock AS set to code 3) sounded like “crickets on crack”.

I guess floppy drives sort of sound like an electromechanical alarm. 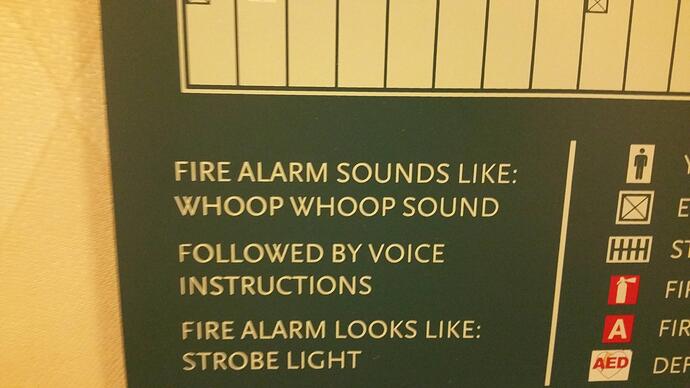 Stayed in a hotel in SF, had signage very similar to what is seen above posted in every room and throughout the halls near the elevators and stairways. Had the evacuation plan as well as the description of the fire alarm. It said “Fire Alarm: Sounds like WHOOP WHOOP, looks like Strobe Light”, but it didn’t mention anything about voice instructions. Had remote speakers w/o strobes in rooms and Spectalert classic Speaker Strobes in the halls. It went off our first morning there, and it did have the tone set to Slow Whoop as well as the unmentioned voice instructions. My father thought it was the alarm clock…

I guess floppy drives sort of sound like an electromechanical alarm.

They do, some but some are really loud (especially the old 5¼ ones) :lol:

Another absurd one I’ve seen (translated œuf corse err… Of course) : “The evacuation signal is a fast pulse high/low frequency lasting for five minutes, sometimes you may hear a vocal signal”

I’ve somewhat described one day the AFNOR NFS32001 (back before I knew it was called like that) signal as a… Weird crazy alarm clock tone. Literally whatever I was thinking at this time :lol:

The alarm will be an unmistakable howling sound.

Later in the handbook it says:

DO NOT TOUCH OR PULL FIRE ALARMS! WE MUST REPLACE FIRE PULLS WHEN THEY HAVE BEEN ACTIVATED

What kind of pulls are they?

It seems like the most common sound description in hotels is “a loud siren”, even though I’ve seen that used to describe TrueAlert horn/strobes, Integrities, and Advances.

To me, it seems like the “alarm sounds like a loud siren” is a thing for Hampton Inns since all Hampton Inns I’ve been to say this on their evacuation plan on the door. I’ve only been to three of them.

Two of them I’ve been to have TrueAlert horn/strobes in them (one of those two have them with the TrueAlert marking).

The other one has a Cerberus Pyrotronics system installed in the 90s, which I thought made sense until I realized that the main alarms were primarily U-MHT horn/strobes with the MTL-style strobe, CP rebranded Wheelock MIZ-24s, along with the traditional U-MHT horn/strobes (older style with the fire lettering on the sides). However, in the pool room has what I believe is a U-MMT, but it’s the newer version with the fire lettering underneath the grille for some odd reason. But even in the off-chance that it is indeed a U-MMT and is set to Siren, it would still seem far-fetched as that the pool room is nowhere immediately near any of the rooms on the first floor.

Going back to the two hotels that have the TrueAlerts: after seeing that the hotel had Simplex TrueAlerts as the NAs, when I saw the “alarm sounds like a loud siren,” I thought that was kind of ridiculous. (unless they are multi-tone TrueAlerts that were set to Siren in one of them :lol: ) (just kidding, it couldn’t have been the case, 'cause at the time I’ve been to that hotel, multi-tone TrueAlerts weren’t in production until almost a year later)

Then there's one that's not inaccurate, but just plain funny: someone in my first high school said the alarms (Wheelock AS set to code 3) sounded like "crickets on crack".

There’s an old video from 2007, where it had what is most likely Wheelock MTs set to continuous horn, and the person in the video said that they sound like “crickets on steroids”. The video is still public (at least it was earlier this year), but I’m too lazy to post the video link at the moment.

My father thought it was the alarm clock....

Oddly enough, some alarm clocks actually produce the 520Hz tone, except in 60BPM pulse. Again, heard it in a video, but I’m too lazy to provide the link at this time.

I’ve heard people refer to fire alarms that weren’t bells as “ringing”. “When the fire alarm starts ringing.” “The fire alarm is ringing”. In buildings that have horns.

I’ve heard people refer to fire alarms that weren’t bells as “ringing”. “When the fire alarm starts ringing.” “The fire alarm is ringing”. In buildings that have horns.

What kind of pulls are they?

Simplex T-Bars that use a B-Key. TrueAlerts on a simplex 4010

Well, we do the same thing with our phones. Ringtones anyone? Though to be fair, phones with bells were always more common than fire alarms with bells. I blame Hollywood.

You’d think that slapping on a picture of a NA into a word document and saying “Sounds like a series of three 1/2 second beeps, constantly repeating” would be enough. Give it 20 years and everyone should generally know (at least in the US) from school days. But by then, I’ll be darned if every new convenience store has a voice evac. Everything in new construction will probably be voice evac/mass notification by then.