I recently purchased a rare simplex chevron pull station with a NYC stripe on it and I wonder, what is the meaning and origin behind the stripe seen on some pull stations.

I have no clue what an NYC stripe is as I have never heard of it. What exactly is it? 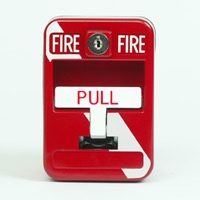 the white stripe that runs diagonally on this particular pull station.

Oh well I have never seen that at all and not sure why they made it with that stripe or what it means. It does look cool though.

Based on the name, I assume it may be something NYC mandates/used to mandate?

This got me curious so i did some research. I found two items on line that say the white stripe denotes pull stations that activate an automatic notification to the fire department. The second article indicates the white stripe requirement was dropped in recent years.

Nowadays if the pull doesn’t send a signal to the fire department, it just says “local alarm” on it.