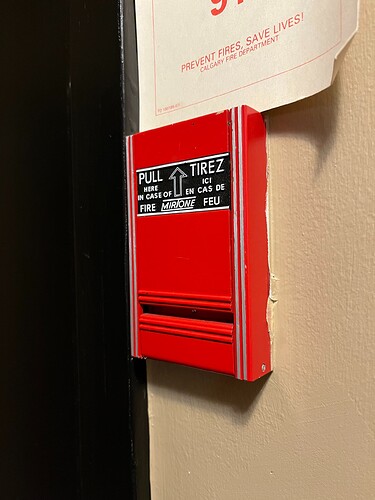 That’s what I thought initially. But I believe the 73303 has a different spring design. The one that I have has a second bend in the spring giving it an S shape. The handle is held in place by the end of the spring after the second bend, whereas with the 73303 the handle is held in place by the part of the spring before the first bend.
Also at the top of the handle there is a small hole used for resetting the handle, whereas the 73303 does not have this hole. Here is a photo of the hole: 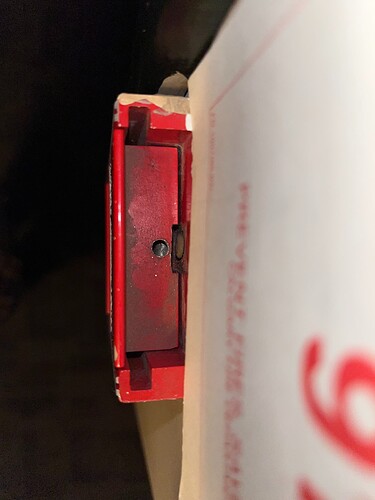 This seems to be an older variant of the 73303. I have a pull station like that one (albeit a US-market model rebranded by Johnson Controls) and its label identifies it as a 73303U: 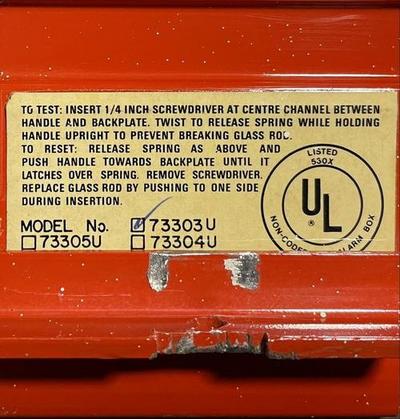 I don’t know the purpose of the hole at the top of the front cover. Despite the different spring design, these pull stations reset in the same manner as the more common version of the 73303.

Is that a photo of the inside of the handle, showing the bottom of the hole?

We have had a problem this year with a couple of these pull stations not being reset correctly then falling open due to vibration when the stairwell door beside them closes, triggering an alarm.

I’d like to confirm which is the correct procedure for resetting them. I assume the resetting instructions are written on the inside of the handle, but the fire panel is armed and I don’t know how to operate it, so I can’t pull the handles to check.

Yes, this is indeed the back of the handle with the underside of the hole. Here are a few additional pictures showing a better general view of the pull station: 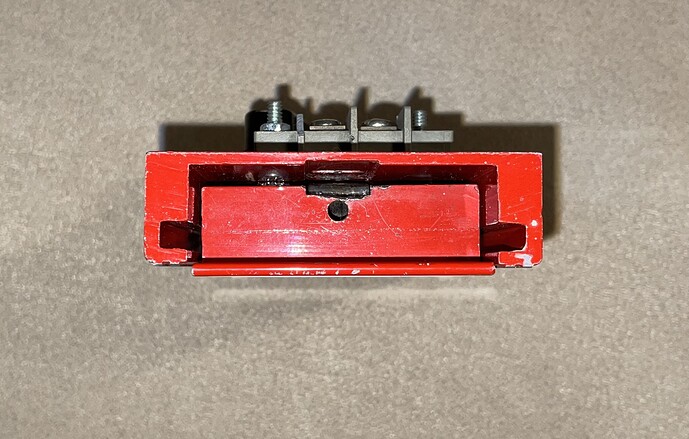 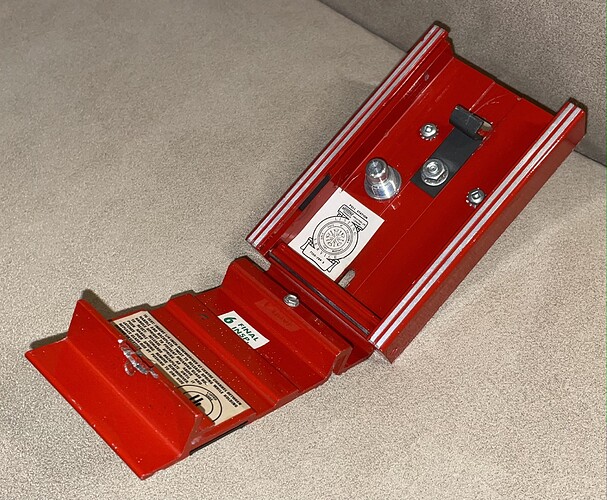 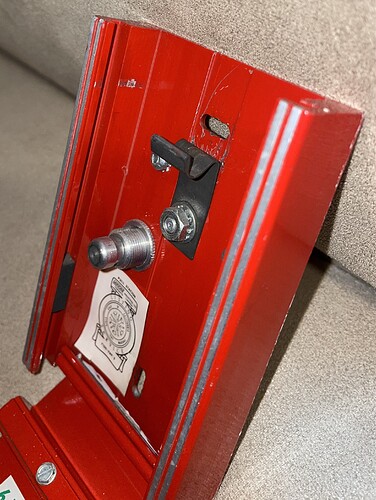 I have no experience with these pull stations in real installations, so I unfortunately have no concrete advice regarding potential solutions. I tested two of the reset methods you mentioned (inserting a flathead screwdriver behind the spring and twisting it, as described on the instruction label, and inserting a screwdriver and pulling on it) on my pull station, and the handle seemed to latch solidly in both cases; to activate the pull station after testing both techniques, I needed to pull firmly on the handle.

If you need any other close-up photos of the mechanism, I’ll be happy to provide them.

Thanks very much for the additional pictures. It is indeed the same as the pull stations in our building. I noticed it even says Mirtone on the fire marshall label inside.

If you don’t mind can you try resetting it using the hole in the top of the handle?

The technician that responded to our first false alarm used a narrow shafted screwdriver inserted in the hole to reset it. It worked fine because that pull station did not fall open again. But I wonder why he reset it this way, because the instructions in your photo say to use a screwdriver in the centre channel.

Yes, we have a few pull stations in the building with the handles jutting out.

When you bend the metal spring back to normal do you remove it first by unscrewing the nut that attaches it to the body?

Can new springs be purchased instead of the entire pull station?

I just tried resetting it through the hole and unfortunately had no success. It seems that you would need substantial downward force (far more than what I can exert, at least without hurting myself) on the spring to reset the pull station in this manner. I should note that I was holding the pull station with my hands when I tried this technique—it may be a different situation if the pull station is solidly mounted on a wall, but I unfortunately have no way to test it out in that manner.

Thanks for trying that.

A couple other questions, if you don’t mind:

Are you sure this is an older variant of the 73303?
Perhaps it might be a newer version.

Is the bolt that attaches the spring to the backplate a carriage bolt, or a regular bolt?
I’m thinking I might try to fix the springs myself by removing it, straightening it out, then putting it back on. If the bolt is a carriage bolt I should be able to do this without removing the whole pull station from the wall. But if it is a regular bolt, I will probably need to remove the pull station from the wall so that I can put a screwdriver on the bolt head.

My 73303U unfortunately doesn’t have a date code, but I’m positive that this is an older variant; this variant appears to have been in production around the late ‘70s/early ‘80s (and it must not have been around for very long as these pull stations seem to be uncommon).

As far as I’m aware, two other variants were subsequently manufactured. The first appears to have been introduced no later than the mid 1980s (I have one with a 1986 date code) and discontinued no earlier than the mid 1990s (I recently saw one with a 1994 date code); it features the different spring design you mentioned in one of your earlier posts. The second appears to have been introduced in the mid-to-late 1990s (I have one with a 1999 date code), a few years after General Signal’s acquisition of Mirtone, and was likely available until the early 2000s; it uses the same spring and plastic instruction plate as its predecessor but features a redesigned body and handle. Moreover, this later variant was assigned a new model number (73353). The Mirtone brand was phased out in the late 2000s and replaced with the Vigilant brand.

Here is an inside view of two other variants with the redesigned spring (left is from 1987 and right is from 1999): 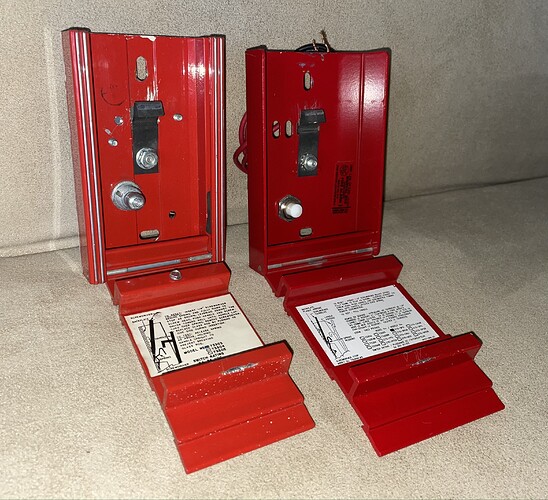 As for the spring, it is indeed held in place by a carriage bolt.

Edit: I came across these photos showing a variant like the older one I have, but with a slightly different spring design that resets through the hole. Could this be what your building has?

Thanks for all the information.

The other variant you came across does appear to be a closer match based on the black plastic label on the handle. When I reset one of the stations that fell open a couple weeks ago, I recall that the spring was stainless steel also. Unfortunately I didn’t think to take any pictures of the inside before I reset it. Now I can’t open any of them because the alarm panel is armed and I don’t know how to disable it temporarily. (It might be illegal if I did too.)

Our building was constructed in 1979, so a production date of late ‘70s/early ‘80s corresponds to this time.

I think I can see why they weren’t in production for very long, because the design of the spring appears to have some weaknesses. Here are a few things I’ve noticed:

I assume the Worthpoint variant is the oldest, but based on the fonts on the reset instructions maybe it’s newer.

It should be fairly easy to fix these pull stations in our building by bending the spring back into the proper shape. But I have to find out if I am allowed to disable the fire panel, and if I am, how to do it.

Here’s a cool Edwards bilingual version of the same late 90s design that el Chupacabra mentioned. As you can see, the labels themselves were never redesigned, but rather recycled from the older versions 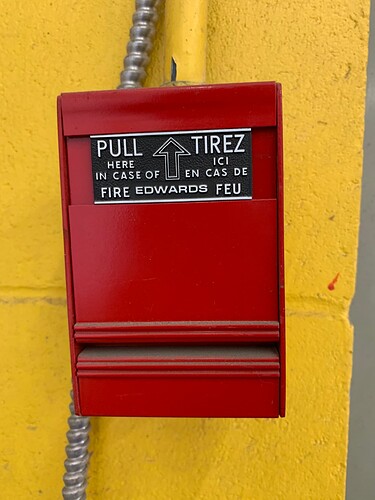 Interesting. It appears to be wider than the 73303.

I wonder if the size for this style of pull station is standardized across different brands.