Hi guys, Steph here - as a little intro I’m 24, a software engineer, and have always been interested in building systems and electrical engineering. This includes fire alarms! While I never collected them (I guess you could say my first device, which I found in the trash, was a new-style TrueAlert ES speaker strobe, with the strobe on top) I always had a cursory interest in the different types of alarms and systems. Messing around on Reddit actually led me to TFP and it’s been cool to read everyone’s stories and delve into a hobby you never really hear about.

Anyway, I was at VMI (Virginia Military Institute) a couple years ago for an event and the entire building had these green TrueAlert speaker strobes with a smaller, custom-looking FIRE lettering. Unfortunately I didn’t think to take a picture of one, but I have a picture in a room with one. Zoomed in, it’s quite blurry but you can make out the TrueAlert. Of note, the only lettering I saw on the device was “FIRE” - no “Simplex” or “TrueAlert”. 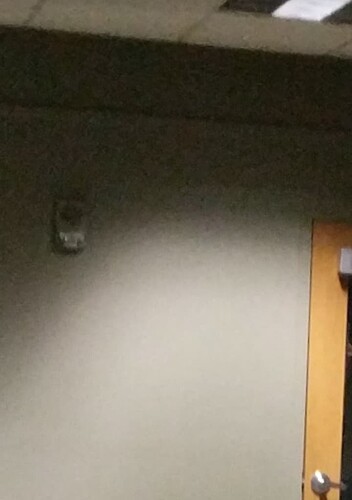 I’m guessing they took the cover off each device and spray-painted it to match the wall color, then used a stencil to spray the FIRE lettering back on. Hopefully this was AHJ approved, as normally these are not supposed to be painted

You know, I once saw a green-painted Integrity at some kind of kid’s physical play place that I once went to. That Truealert though looks more gray than green, though it could just be the lighting.

I honestly don’t know why they spray-painted these, given I’m sure they wouldn’t have stood out that much. If you ask me it should be illegal in any case to paint a fire alarm device, especially since most new ones say so right on the device.