Panel coding behind the scenes

Hello, I was wondering how a panel that has preprogrammed tones (temporal, marchtime/20 BPM for mine) work behind the scenes. Like, if the default is temporal, how does the panel store it in memory alongside 20 BPM/march time? And if I switched the coding to march time, how does the panel send a signal to the notification devices when the alarm is activated after the coding was switched?

With my experience with Homemade Fire Alarm panels, I can say that the coding options are part of the code, and they are stored on a variable. When the Panel enters an alarm, The Code reads the variable and pulses the NAC to the associated Coding option. For example, If 1 was Temporal and 2 was 120 BPM march time and the panel was set to 1. Then the user changes the coding. The number is now 2. When the panel now goes into alarm, It will run an if statement like this. 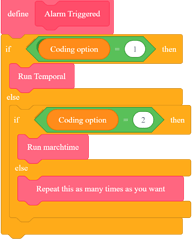 I used Block coding to make this as simple as possible.

Since the variable is 2, It will run Marchtime.