Planning a house system for one day

I’d honestly like to put an actual life safety fire alarm system in our house, but I know my parents wouldn’t want me to. I did however introduce the concept of fairly inconspicuous “flat wire” to them though (like the stuff NewAgeServerAlarm previously used on his system). Also I’d be careful with how many new topics you’re creating.

. Nice my friend.
Also my secondary school in the UK, which caters for special needs children, who have autism and ADHD (both of which I have, I take tablets for the ADHD) has a Gent by Honeywell Vigilon with a mixture of detectors with sounders, strobes and some also have voice and sounders with strobes, I think.

Interesting. Funny you should say Autism: I have a “variant” of it, called “Asperger’s Syndrome”. Oddly enough it seems quite a few other members of the community also have it or Autism, which might explain how they got into the same interest as the rest of us (which of course is fire alarms).

Nice, btw I got into fire and burglar alarms back in 2015, but watched videos of them and liked them, but now it is a passion that will grow, also I will get a UK made fire alarm panel for a collection I wanna start one day.
PS the alarms, can’t remember about the videos and besides it was years back, also many places in England have fire alarm bells on continuous, either as class change, fire alarm notification appliance or both I think. But usually sounders nowadays in England, but some heritage sites have bells as they are grade II listed so can’t have the bells replaced with sounders.

I’d say just about the #1 guaranteed place in the world to find bells as fire alarm signals in almost every building would be Canada.

Darn right ‘bout that you are, also you don’t mind that I am British do you?

Not at all. In fact, I’ve said previously that while I probably wouldn’t buy European or Asian devices willingly (or maybe I would), if someone offered to give me some I’d probably gladly accept (which of course is helped by the fact that most fire alarm systems around the world use 24VDC for powering the devices).

Thx my new friend, also if I could I would give you a UK device, also the UK left the EU btw, the mistake was the UK joining the EU in the first place, but despite that, we are dealing with covid in the UK, I haven’t caught it at all, and I am so lucky, also I was a Christian but some of the older kids who used to be at my school bullied me over it, so I am not a Christian anymore but I still know God does exist I hope

To be honest I don’t think I’ll ever understand the whole “Brexit” thing. Yeah, wouldn’t surprise me though if you’re doing better than the US in that regard (COVID). Stay safe.

I’m not religious myself, but at the same time I neither believe in nor deny the existence of God (though I use his name in vain all the time along with Jesus Christ’s so…).

Hey, that is why we are human, also don’t worry about Brexit, we got it done, so yeah, also I might take a picture of my house alarm panel with onboard keypad btw. 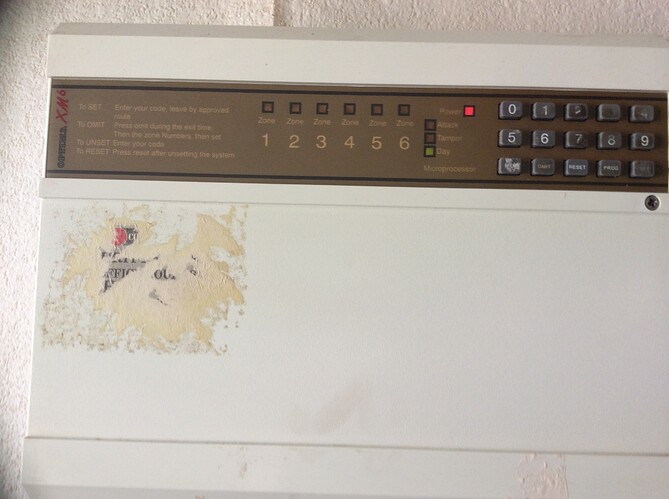 CarsonFireAlarm hello, are you there?

He is not there right now! It’s me, is that from the USA or the UK?

I’ve been here basically the whole time, I just don’t think I could think of anything to say at the time.

They live in the UK, so that’s a UK security system.

I am thinking of a home fire alarm system as well. Unfortunately, I don’t have the devices. These are the devices I am thinking of using.
Pulls: Bg-12s
NA: System sensor P2R or P2RLs
Sync Module: System Sensor
Detectors: I-3 Smoke, Edwards/EST Heat
Panel: Conventional Fire-Lite
Annunciator: Fire-Lite
Wire: FPL
Other: Vixen Horns Siren (Outside)
Any questions, comments,or concerns are welcome. Have a good day!

Keep working on it & at some point you might have the components necessary to build such a system.

If you used all System Sensor signals you could have them all synced together.

Keep in mind: you say “any Fire-Lite panel”, but some are conventional while others are addressable, & addressable panels don’t use the same kinds of initiating devices that conventional panels do.

If you have plans for it to be a life safety system it’d be a good idea to use FPL for the wire since it’s approved & rated for fire alarm use (& is what’s used in actual systems).

I will edit my list. Thanks Carson. Also are BG-12s addressable or conventional? The outdoor siren is to vary up the system a little bit. Do you think I should put a remote strobe with it?

They come in both conventional & addressable versions; the type you’ll need depends on the panel the system will have.

Yes, but then you have to worry about annoying your neighbors anytime the system activates (though you still would if it was any other kind of noisemaker such as a horn).

You could, but I’d say that there’s no real need to (though I suppose you could put just a remote strobe to avoid annoying your neighbors).

There are a few full time neighbors. Most neighbors come down almost every weekend. I edited my list so the panel is conventional, using FPL wire, added the system sensor sync module, and took out the Wheelock. What is the difference of the mechanical and electronic Edwards heat detector? Should I use a chime instead of the siren? Should I sound Code 3 or Continuous? All of these questions are for Planning and educational purposes. Again, Thanks for the help. I feel like you could be a customer service employee.

It’d probably be better if you did use a chime, again for the sake of your neighbors.

If it’s a life safety system, Code 3 as stipulated by NFPA 72. If it’s a hobby/demo system, it doesn’t really matter what pattern everything pulses in.

You’re welcome. Thanks, maybe I could very well be one.