We have a Pyrotronics System3 which has been in Trouble Mode for 11-13 years, It used to monitor 6 zones and approx 24 pulldown fire alarms. No smoke detectors. Minimal number of sprinklers. Who can recommend a replacement for our Pyrotronics System3 so that we can get up to date, to be addressable and up to 2022 standards ?

Because the System 3 was a conventional system, in order to bring your system up to addressable, addressable monitor modules would have to be installed behind each of the pull stations in your building, and for your sprinkler waterflow switch. The wiring may also have to be pulled and re-run since code isn’t absolutely clear that you can reuse existing wiring. Plus the wiring pathway would be structured differently as all 25 devices would be tied to a single SLC circuit.

Also important to consider, some of the pull stations themselves may be due for replacement if they were the cause of the trouble(s) in the first place.

Welcome to the forum!

You’ve indicated that you want to bring the system up to 2022 standards, which will make this a fairly involved upgrade.

Some pictures of the existing system and its peripheral devices will help us better explain what will need to be done.

In the absence of pictures, I’ll go over the different peripheral devices and general considerations:
Pull stations: If the existing pull stations are mounted at code-compliant heights (48 inches from the floor), you can simply mount a monitor module in the junction box as @Robert_A mentioned. If they’re mounted too high, you can use an adapter to lower the height. 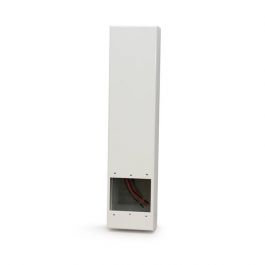 Designed to assist in meeting ADA requirements, the DAR is the easiest and most economical way to lower the height of an existing fire alarm pull station device or notification appliance.16 gauge steel constructionDurable matte powder coatRaised...

Note that some very old pull stations may not meet current codes given the amount of force needed to pull the lever, and will need to be entirely replaced if you want to bring the system up to 2022 standards. (A picture of the pull stations will help us determine whether or not this might apply to you.)

Signals: Given the age of the system, the existing signals wouldn’t be up to 2022 standards and will need to be replaced.
For a smaller building, horn/strobes would generally be sufficent.
On the other hand, you’d need voice evacuation if at least one of the following is true:

There are some additional cases where voice evacuation is required in specific types of buildings.