I had some question about the age of fire alarm types, trying to deduce the installation year for buildings I know. For instance, when did it become common for horns, rather than bells, to be used as alarm notification devices? Was the change done because bells have moving parts? Sometimes you may still see them today on the outsides of buildings (I don’t know why :?: when the insides have horns) though they may only ring if the suppression water flows. I know that if an alarm has no strobe, it must be from before 1990 as they are ADA requirements. But that still doesn’t answer the age of a bell alarm, because they can be combined with strobes. Also, when did the manufacture of coded systems kick the bucket? I’m estimating the 1960s-70s. Did addressable systems start in the late 1980s? That would make sense because they are computerized.

Welcome to the forum! Horns had largely replaced bells by the 1970’s, though horns had been in use for fire alarm installations since the 1920’s and bells continue to be installed today in certain parts of the country. The reason for horns replacing bells is that they draw less current, can produce a louder signal, and won’t be confused with class change or elevator bells. Bells are commonly required to be installed outside a building for sprinkler signaling purposes.

Wheelock introduced the first line of fire alarm strobes in 1978. Strobes became widely adopted by the late 80’s and were a requirement for most new installations by 1990. White or frosted strobes were common until around 1993 and stopped being used altogether for fire alarm signaling by 1996.

Coded systems became less common by the 1970’s and were replaced by solid-state multiplex systems in the latter half of the decade. However, some companies such as Edwards continued to manufacture replacement parts for old coded systems into the 90’s.

Prior to addressability, there were multiplex systems which pioneered the ability to transmit transponder data over two wires, but couldn’t intelligently communicate to each device. This was the cutting-edge technology from about 1975-1981. Many companies seem to hold the title for “first truly addressable system”. Simplex had the 2100 in '79, while Pyrotronics had the XL3 in '81. The 2100 was more of an intelligent multiplex system, while the XL3 was more of a primitive addressable system. Both were microprocessor-controlled. Either way, addressable panels improved and became more popular as the 80’s went on and became the standard for large facilities by the early 90’s. Addressable technology also began to trickle down to panels for smaller buildings in the 90’s.

Welcome to the forum!

Dammit Destin, I just spent like 15 minutes typing up a response then the forum tells me you beat me to it. … I just cut out all the stuff you already answered. Dammit. lol.

There are some places that still have bells and sometimes they are still installed. All depends on what the customer wants. You will find more bell systems in Canada than the US, however.

Visual signals began to be required in the 1960s and they started with incandescent lamps.

The first small scale analog addressable fire alarm panel (which was affordable) was the Notifier AFP-200, opening up a new market for “out of the box” simple addressable panels for small buildings.

Fun fact: the Simplex 4010 was created very fast after Notifier released the AFP-200 since Simplex began to lose potential customers due to their very high priced 4100 and 4020 systems.

Thank you for your responses. And one more question: When were Simplex TrueAlerts invented?

Fire-Lite had a small addressable fire alarm panel in the 1980s, however it was a VERY basic system where detectors only reported that they were in alarm.

In the early days addressable systems used slow data buses that were susceptible to interference and therefore required a shielded cable to each device, raising the installation costs.

“Analog Addressable” refers to a system whose smoke detectors are able to report smoke sensing data to the panel and other information. However these systems were slow and susceptible to interference. These have since been replaced with digital systems that send the same information using high speed binary data instead of analog frequencies.

SLC means Signaling Line Circuit and it is the technical term for the data bus used by the panels.

Notifier claims to have the fastest and largest capacity SLC in the industry, surpassing Simplex by a long shot. I can testify to this having seen both types of systems in person.

I’m kind of curious… When was the NAC introduced in a FACP…?

Since the beginning of FACP’s. In older systems, they were often called gong circuits or just signal circuits. I believe the term “notification appliance” was introduced by the NFPA.

Most systems used to have coded pulls, the way you would know which station was pulled is each pull in the building had a different code. So the pull stations would have a number plate on them such as 232 the alarm would sound – — – and depending on how far the pulled the lever back is how many rounds of that code it would do.

And because of that the code would only run like four times, right? That seems kind of odd in hindsight, creating a fire alarm system that sounds for only four rounds then stops.

It depended on the size of the system. The very first fire alarm systems were not mass-produced and only needed a power supply with maybe an off switch. That eventually evolved into pre-built electromechanical panels that were essentially just fancy power supplies, sometimes with city shunt circuits or McCulloh loops to communicate to the fire department. I’d say mass-produced control panels began around the 1910’s or 20’s. Early systems were often non-latching and silenced as soon as the pull station was reset. Once automatic fire detection entered the picture, the need for latching circuits gave way to more complex designs with stuff like disconnect switches, annunciator lights, and voltage meters. By the 1930’s, there were many new options available such as battery backups, DC signal circuits, and local energy boxes connected to heat detectors or waterflow switches to give them a code. The technology really didn’t change much from then until the 1960’s.

Control panels were often at the center of coded systems. They employed “gong relay” circuits which would relay the coding of an activated pull station onto the bell circuits. Some coded systems would latch into alarm even after the pull station was done with its code. Most of them had a trouble bell that would sound to remind building personnel to replace the glass rod.

For a better understanding of antique fire alarm systems, check out this 1930’s Holtzer-Cabot catalog. You can flip through it with the right arrow button.

Also check out this 1936 Holtzer-Cabot coded gong relay system in a 22-story hospital. Amazingly, it was still in partial operation until it was removed in 2009. I wanted to get my hands on it, but I think the Honeywell guys snagged it for their office collection. I did get a couple round coded stations though. 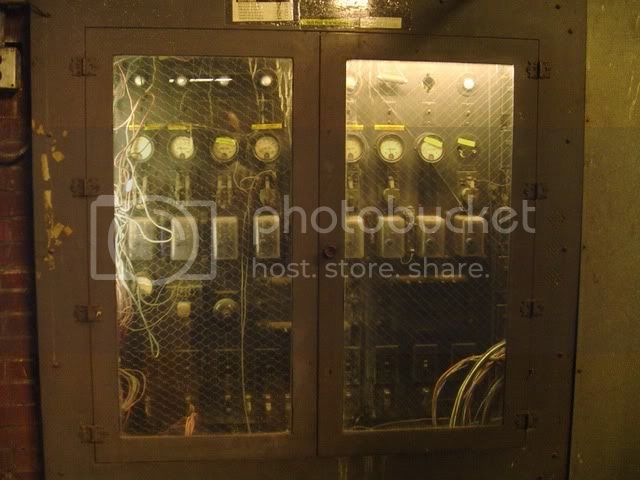 Why would they want a “piece of junk” like that it’s no use to them. It’s cool to us.

Why would they want a “piece of junk” like that it’s no use to them. It’s cool to us.

The employees have collections of their own, too!

If you were working at a fire alarm company, and you saw a really old panel like that…would you snag it?

In fact, whose to say that employee wasn’t the “Andrew” or the “Destin” of this place ten years ago?

I’d LOVE to find something really old like that and keep for my collection, though.

Better trash picking than buying them for $200+ in some cases…

Those relays them selves probably weigh 40-60 Pounds not to mention the box it self 100-200 pounds.

Do you have a picture of them actually saying “QuickAlert”?

Do you have a picture of them actually saying “QuickAlert”?

The QuickAlerts never displayed their name on the actual device; they only had the Simplex logo (no "TrueAlert’ text).

You can identify a QuickAlert by it’s closed horn grille with a small hole off to the right.