OK, I know there has been a couple topics like this before, but those were mostly about bells. This one is mostly about what controls all the bells and clocks in schools. I have always found these things pretty interesting, ever since I started junior high and would synchronize my watch to the master time panel in the main office so I would know EXACTLY when the bell would ring. I am also posting this since the K-8 school I went to for kindergarten recently got a brand-new master time control. 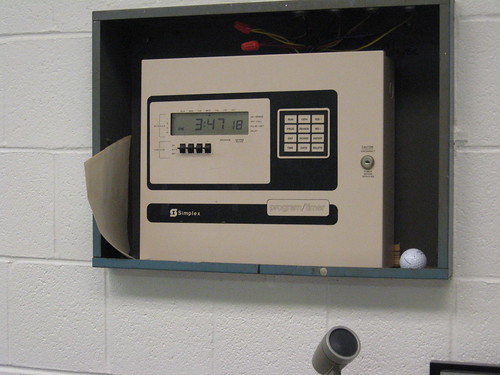 It controlled all the hard-wired clocks and school bells throughout the main building. We mostly had these old square Simplex clocks as the originals:

Underneath several of them I think are Simplex PA speakers, but I’m not sure. The class change system consisted of mostly 6-inch Simplex bells (probably the 4090-series) flush-mounted behind gray grilles, and were LOUD. The main gymnasium had three 10-inch bells behind silver grilles, and outside there were four (only two of them now work, one has also been removed.)

During the summer, the Simplex 6100 broke, and now they have an American Time and Signal AllSync master time panel:

So far it’s working with no problems, but the day I first saw this new panel, one of the outdoor bells was malfunctioning for some reason.

The elementary school I had grades 1-6 at had a REALLY old Simplex master clock panel from 1971. It was blue and on the left, it had an analog clock display that I think had roman numerals, and on the side I think it said “SIMPLEX Fire Alarm Systems” on it (weird why it said that, the school had a Gamewell FlexAlarm fire alarm system.) After I graduated, it was replaced with some other master clock; IDK what kind it is, it has a small console with a red vacuum-fluroscent display; doesn’t look like a Simplex model. We had the same clocks as the above school, but with no second hands, and the regular hour/minute hands were shaped differently. We also a few other assorted clocks, and the cafetorium and library had these fancy Simplex clocks:

The school used to have a functional bell system back in the 1970s, with old 6-inch Simplex “STR” bells, but they don’t work anymore. The bells are still up, installed next to the fire alarm signals (old Vibratone 450 horns behind gray grilles):

My middle school originally had and Edwards time system when it was built in 1957, but when I went there they had a Simplex 2350 master time panel:

The bell system ran on three circuits: one for the inside bells in most areas, one for the outdoor bell and in the auditorium wing and wood shop room, and one for the bell in the cafeteria. They used to all ring in the same order: indoor, outdoor, then cafeteria (one bell circuit would start ringing two seconds after the first did.) Most of the bells were 6-inch Edwards Adapt-a-bels, but we did have some Edwards single-stroke chimes, and the wood shop and a large computer lab had Simplex 2901-9607 bells. They still had the old Edwards clocks as well.

In 2010, their Simplex 2350 broke, so they got an American Time and Signal AllSync master clock system to replace it (the same model that K-8 school now has). This new one just rings all the bells and chimes at once. Additionally, it began to break down this spring, but it has since been fixed.

My high school had a Simplex 6400 master time system. Note the giant mounting plate it’s on; I guess the school used to have a HUGE master clock panel. The clocks are mostly the same ones my elementary schools had. This school also didn’t use “regular” bells; it just had a tone over the intercom (the speakers were all made by Dukane, so I’m guessing it was a Dukane PA system.) On some mornings, the PA system would glitch up and we wouldn’t be able to hear the bell or announcements in certain areas of the building, so they’d make a few test announcements and test the bell system to make sure the whole school can hear it.

I also recall when I was there, the “Yellow” section in the main building (it was made up of five sections; the “Green,” “Red,” “Azure” and “Yellow” houses along with the administration area) had the tone sounding quite different from how it sounds in the video. They fixed it after I graduated, and now it sounds like the rest of the school (the Field House and Fine Arts building most likely share the same time panel.)

Stevenson has a newer National Time clock and bell control panel, located in the main office. They likely used a Standard Electric model back then. I don’t know what the other schools I have been to used for their clock and bell panels.

My ES had a Simplex 2350. The school closed down in 2003 in favor of a new building, which probably has a Lathem time controller of some kind.

My MS/HS also had a 2350 for a long time, but in my senior year it shorted out (it would often do that over the years, causing bells in some areas not to ring and clocks to be wrong) making some functions not work (the sync function was the most noticable) and over spring break that year it was replaced with a 6400 system. This system rings the bells in all areas of the school at once, as opposed to circuit-by-circuit with the 2350. Also, on the old system, if the bells were supposed to ring at :58 past when the syncing occurred, it would first sync the clocks, and then upon completeion of that would ring the bells. The new system rings the bells WHILE syncing the clocks.

BTW, is anyone who has come in contact with a 2350 aware of the double ringing feature? At my HS, the bell for the 9th/10th grade lunch (at 11:47) would ring twice (ring, pause, ring again. The pause varied over the years from 1 second to 3 seconds, IDK why). When the MS redid its bell schedule in 2004, the 9:39 bell rang twice there. With the new system, all the bells only ring once now. Also, the HS bells used to ring for 5 seconds, but after the 2350 shorting out one time I guess they replaced the relay and after that the bells rang for 3 seconds. The 6400 has all the bells ringing for 3 seconds.

I work in this industry, so if anyone has questions I will do my best to offer advice. I’ve always been interested in low voltage control systems…clocks, PA, fire alarms…

The red vacuum fluorescent display you mention Wiley is probably an LED display, since no VFD I know of glows red. A master clock with red display probably is a Lathem.

I have not heard of the 2350 double ring, but I will dig through the manual and let you know what I come up with.

I only saw one master time system, and it was in my HS before being renovated in 2000 (the school was built in 1969.) I think it had an analog clock on the front, and it was taller than it was wide. The bells were Edwards 4" Adaptabels, and the rooms had buzzers behind the clock/speaker units. Some of the buzzers were really loud and made me jump, but other buzzers were just audible. Some of them were disconnected. I thought the bells were loud, but not as loud as the 6" bells my first ES had (I think they were also Adaptabels, but I don’t remember, as they were mounted behind grey flush plates.)

My second ES, my MS and the HS after it was renovated all had a tone over the PA that sounded like the Vibrating Chime tone on the older Simplex voice evac panels, but it was about 500Hz. I’m pretty sure that the renovated HS had a Simplex Master Time system, as the clock/speaker units were Simplex. I think the system at my second ES was also Simplex. I’m not sure about MS though, but the tone sounded the same at all three schools, so they could’ve had Simplex, but the clock/speaker units in some of the rooms were Standard ones. The other rooms had separate clocks and old, unknown speakers.

None of the schools i’ve been to have had a clock control panel. There was only the bell system. All the clocks are what I believe to be battery powered, or maybe hard-wired, but none of them were syncnorized at all.

Indian River Elementary School, where I had Pre-K for August-October of 1999, most likely did have a Master Clock System (but I’m not sure though), as my Pre-K Classroom and probably several other rooms had LCD Clocks and it was probably a Simplex or DuKane System. As far as bells go, they have a tone through the PA System similar to this <LINK_TEXT text=“Loading... … attach=314”>Loading...</LINK_TEXT>. Their PA System was a Dukane StarCall.

Edgewater Public Elementary, where I had Pre-K for October-the end of the 1998-1999 School year and for the rest of the 1999-2000 School year and the 2000-2001 school year, as well as Kindergarten and First Grade, had remaints of an old bell system in certain areas, as I can remember my Kindergarten Classroom having the hammer of a Simplex or Faraday Bell, it looked similar to this:

They had no master clock system when I was there.

Spruce Creek Elementary School, where I had grades 2-5, also had remaints of an old bell system. Some of the classrooms, except for those in building 12 and the portables, which were put in when I was 3rd Grade, which were the exact same type that Edgewater Public Elementary had. However, outside had some sort of Simplex or Faraday Bells which were disconnected, which were pretty rusted though!

Both Edgewater Public and Spruce Creek Elementary used a 4 to 5 second 1250 Hz Sine Wave Tone for the bell. Their PA System is an older Rauland (probably).

Creekside Middle School, where I had Grades 6-8, had NO master clock system. However, their bell is similar to the one here, but there’s a .5 second 500 hz sine wave tone after the 4th beep. Their PA System was a Rauland Telecenter.

Spruce Creek High School, where I’m currently attending, has NO master clock system either, but there are 2 LCD Clocks in the old cafeteria! They also have remaints of an older bell system, in the main atrium there is a double-gong, grey, bell, of which I don’t know who made it. There’s a 4-inch bell with a bungee cord in the “Black Hawk Inn”, and there are some sort of 10 Inch Bells outside, but they are painted white, though. Their bell sounds like this: <LINK_TEXT text=“Loading... … 640197.wav”>http://www.davidsonfirealarms.com/userfiles/uploads/1318640197.wav</LINK_TEXT>. Their PA System is a Rauland Telecenter.

-Mix of Dukane, Simplex, and another brand clocks

Lathem time controller – all it does is rings the bells

-Rauland time controller and digital clocks. One analog clock in the gym.

One building at SMCC:

-1970s Edwards time panel… only one of the original clocks is still connected though.