I just recently got a job at an elementary school in the cafeteria. For the two fire drills they had they sounded the fire alarm and then made a PA announcement saying “this is our monthly fire drill” and “to put in the fire drill video” instead of the students going outside during the drill. They then silenced the alarms shortly after the announcement.

Seriously? That’s got to be some kind of code violation. They should have the kids go outside when a drill occurs to teach them that that’s what they should do if the alarm ever goes off & it’s not a drill.

The fire alarms at the school are Simplex TrueAlerts.

They had another fire drill in March. Again after sounding the fire alarm a PA announcement came on saying that “this is our monthly fire drill” “we are not evacuating” and to “put in the fire drill video”.

Yet another blatant violation of code…

Yes, really. If they are going to just have the kids watch videos they might as well not even sound the fire alarm to start with, because the fire alarm signals evacuation. That is the purpose of schools and other buildings having a fire alarm system.

Precisely: having the students watch videos on fire drills & telling the students it’s a drill completely defeats the purpose of even having one in the first place. The purpose of fire drills is to teach students to leave the school as soon as they hear the fire alarm sound, which doing it like that will not do. Heck schools really shouldn’t even tell students when there’s going to be a drill since then they’ll treat it as if it was a real emergency, which they always should, because one day it might very well be one.

The school had a fire drill today. Finally they had a normal fire drill where everyone went outside. They announced the all clear over the PA speakers.

My best guess is that the system was not working at that time but the school still had to do the drills.

If it was working they have no excuse for not sounding the alarms like they should have.

The school has sounded the fire alarm for all the drills. Simplex Truealerts.

They announced the end of the fire drill (all clear) over the PA system.

The school had a fire drill today. The Simplex Truealert horn/strobes went off and a few seconds after they sounded they made a PA announcement saying “this is our monthly fire drill. We are evacuating. Everyone please leave the building.”

At the end of the fire drill they made a PA announcement saying “this is the all clear.”

I’m glad they at least sounded the alarms off this time, even if they somewhat undermined the point of a fire drill by identifying it as one (since like I said then everyone won’t treat it as if it was an actual alarm, which can be dangerous).

The school has Simplex Truealerts as the alarms inside the school. The exterior alarms are different. This is what they are: 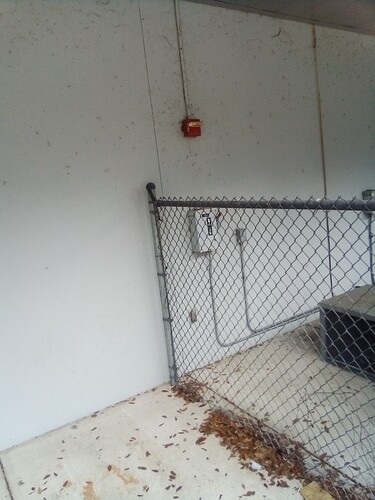 I should mention that while the 2018 edition of IFC says that fire drills shall be performed monthly in Group E occupancies (i.e. education occupancies) per Section 405.2, drills shall be designed in coordination with local authorities per Section 405.1. Prior editions that your jurisdiction may have adopted may be different, or local amendments may change these requirements outright, as the I-codes are a consensus standard.

Putting on a “fire drill video” isn’t unheard of, as in Texas, there is a further requirement that there are to be two fire drills within the first two weeks of school, but one of these drills can be satisfied by either verbally or informally going over evacuation requirements.
This may have been coordinated with the local AHJ, so without knowing anything else other than “for this one fire drill they put on a video rather than making the alarms go off” may have actually been allowed (albeit reluctantly) by the AHJ. You have to remember that we are still technically in a pandemic and OP first posted this in February, in the dead of midwinter.

You can fault the AHJ for their lax/poor attitude toward code all you want, but like it or lump it, it is ultimately up to them how they interpret it. Unfortunately, if engineers and code consultants always had their way, the world would be run much smoother. This procedure is goofy to be sure, and if it were up to me I wouldn’t let them do it this way, but this very well may have been run by the AHJ with their blessing. If not, then the school district will have to answer to them eventually.

The school had another fire drill last Friday. The fire alarms sounded and then a PA announcement came on saying “this is a fire drill. Evacuate the building.”

I… can’t even believe that the school does THAT. At least they eventually decided to perform a correct fire drill but STILL.
And I thought my school neglected fire safety…

It is kind of like a manual voice evac. The alarms sound and then they get in the PA system with an announcement.

Last Monday the school had a fire drill. The alarms went off and a PA announcement was made saying “this is our monthly fire drill. Everyone evacuate the building.”