I have a Simplex 2001 fire alarm panel coming in the mail. I was very excited I could fine one! I saw a previous discussion about manuals for the panel but no links to any. I have the 2001 card wiring diagram from another website but I need a little more information than that. I am aware of how a 2001 functions and how it’s a card based system. Also according to the ebay pictures It did not have a Signal card or March time card. I went ahead and ordered a Signal card. Will the 2001 give NAC outputs without the signal card or is it required? Plus I might go ahead and order a March Time card later. I believe a wire would jump from the main control card to the March Time card and then to the signal card? Also I believe the terminal blocks on the bottom of the CPU board give card outputs. Like 1-4 is the main control card output and if a zone card was installed in slot 2 then 6-7 would be zone 1 and 8-9 would be zone 2? Also if Card slot 5 had was a 1 NAC signal card then 17-18 would be a NAC output?

Since the 2001 panel came in several versions, I need to verify which you are getting. Is this a small red box system with one row of eight modules that plug into a single motherboard?

No 2001 of any kind has NAC outputs without a signal card.

It’s a single row, 8 card, Simplex 2001. I ordered a Signal Card from a different seller as this doesn’t seem to come with it. Here is the ebay image.

That’s what I thought from the description and questions but wanted to be sure. Here is some documentation for you. That is a 2001-3080 commonly known as a 2001 Repack. It is a repackaged version of the full size 2001-8001 for small applications. There was also an Expanded Repack that had two rows of cards on a common motherboard.

The 2001 Troubleshooting Guide can be downloaded from this link. It has the pin out signals for each card.

Here is a Dropbox link for the 2001 Repack Field Wiring Diagrams.

Here is a Dropbox link for the module interconnections for custom operations.

Here is a Dropbox link for the worksheet for planning the wiring for custom modifications.

This should keep you busy for a while.

Awesome! I really appreciate it.

I know this is a very rare module, but does anyone know where I can find a Simplex 2001-2077? None on ebay and google turns up nothing. Might Simplex themselves be able to help or does anyone know of someone that might have one? It would be great to set off my 4050 alarms with the 2001.

I know this is a very rare module, but does anyone know where I can find a Simplex 2001-2077? None on ebay and google turns up nothing. Might Simplex themselves be able to help or does anyone know of someone that might have one? It would be great to set off my 4050 alarms with the 2001.

The 556-661 is only the circuit board for the -2077. Still would need the mounting bracket, adjustable transformer, etc.

Cheaper and easier to find some old DC horns.

Another idea. You can operate 2 of the 4050s with that transformer rig I drew. The 2001 has one general alarm relay that can be used to switch the power on and off. It would be on until reset. Add a 556-556 relay board which can be made on until acknowledge. Either of these would be unsupervised operation.

Would I be able to do panel coding with it. Could I wire the March Time card or coding card to the the transformer and operate the 4050s? I don’t think it’s that easy but maybe there’s a way? My transformer takes 120v and steps it down to 24v. It would need a 120v source to operate properly.

Son of a gun! I think there’s one for sale right now? Is this it?

That Ebay item is NOT a complete H module by far! It is only the circuit board. Still need base plate, adjustable transformer, transformer mounting bracket, circuit board mounting standoffs, fuse holders, wiring harness, terminal strip, plug in relays for the circuit board, and other items I can’t think of at the moment.

The built in relay on the 2001 motherboard cannot be coded. It is just on until reset.

The 556-556 board has two relays. Each one has several jumper wires that are used to set them up. These relays can follow a march time code module.

120 VAC is required to the 2001 transformer to power the system so you have power in the box.

I did some digging and found a copy of a 4208 parts list. Here is the page that shows a complete H2 module. An H1 is the same except for one less transformer and one less relay. 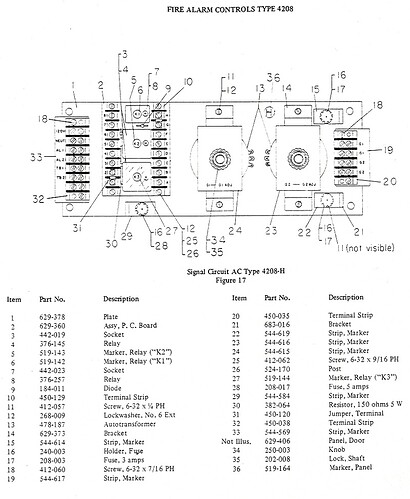 So I would connect the March Time or coding card to the 556-556 then out to my transformer?

The 2001 system uses a buss architecture for common signals between the cards. These are named in the first section of the Troubleshooting Guide book. The “C” buss is the signal activation buss. All code modules have an output that connects to the “C” buss to pulse the relays on signal and relay modules.

There are a few jumper wires that have to be cut on the signal and relay modules and a diode to cut on the control module to convert from a plain constant ring system to a coded system. That can be discussed in detail when the time comes. The information is also in the Module Interconnection instruction book.

Set up a relay on the 556-556 to pulse with the code and use the relay contacts to operate the transformer.

Looks like the 2001 is not coming. Seller won’t respond to any messages even through pay-pal. This is the second time this has happened and it really annoys me. Item hasn’t shipped in over a week. It’s past the estimated delivery date. Why put something up for sale if your not going to monitor any activity. Come on, $250 and the seller isn’t notified!? If the seller doesn’t respond by tomorrow I have buyer protection but this is just ridiculous. :evil:

Thanks to everyone who provided help for the Simplex 2001.

Well the Simplex 2001 has shipped about an hour ago. I was just about to open a case and it finally shipped! I was really worried all week about this. I’ll ask in this forum if I need any help with the wiring but I think I got it.