We have a replacement FACP on order, but need to quiet this system until the new one can be installed.

Any suggestions are truly appreciated!

There were several annunciators that were used with the 4002. The most commonly used ones were the RCU/SCU series.

Is this your annunciator? 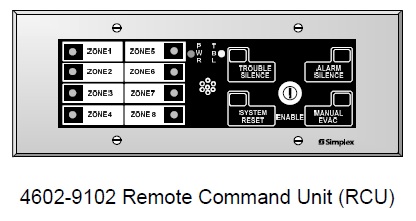 Thank you for any suggestions

The piezo (buzzer) is soldered directly to the board, so there is no “wire to cut” to disable it and leave the remainder of the annunciator functional. There is no switch setting that can disable the piezo either. Intentionally disabling the entire annunciator would delay in locating an actual emergency situation in your building. That is a violation your fire marshal’s office could issue a citation for if discovered. Then you have to explain it to a judge.

Thank you very much for the response. I certainly understand & appreciate the situation.

Sadly the panel has been in a trouble state for a while & the service provider is unable to repair. A replacement panel has been ordered. The old panel sounds trouble intermittently and often enough to be a big nuisance. While we wait for the replacement panel we have 2 options; kill the entire system, or silence the trouble from the annunciator. Since there is no way to directly silence the piezo, seems like disconnecting the annunciator is the only viable option. Sadly I can’t really sit in front of the panel round the clock & press Trouble Silence button every time it hiccups. See the dilemma?

I fully understand your situation. I came across it many times over my years in the industry. Being an older panel, the 4002 does not have modern features like a history log. There is no way to find out what happened 5 minutes ago. Someone has to be in front of the panel when the trouble occurs.

Being intermittent it could be from many causes. It could be a loose wire anywhere in the building, a high resistance ground fault that reaches the trigger point intermittently, or even the brownout sensor circuit beginning to fail. When there is no history log these are quite difficult to diagnose.

One thing to keep in mind. If the trouble is being caused by an internal fault in the panel, a replacement panel will take care of the problem.

However, if the cause of the trouble is external to the panel it will still be there after the panel is replaced. If there is an intermittent fault in the wiring, replacing the panel will not magically repair the faulty wiring. The intermittent troubles will continue but there will be more aids to troubleshooting the problem.

Thank you very much for the information & response. Truly appreciated!

Truth be told, I suspect the issue is the panel, a wiring bus, or the system board. I can temp silence or cause the trouble condition by giggling a few wires in the panel, which in turn places small stress/movement on the bus & system board. That doesn’t mean we are out of the woods, just suggests the issue may reside at the panel.

Quick Question: Apologize in advance if this is the wrong forum, but we are trying to decide if we should replace with new Simplex 4007ES FAPC, or an open system like Siemens? We are planning on replacing most of our current Simplex smokes with the new addressable version. And I believe we will be locked into Simplex equipment (smokes, CO, pull stations, etc) once we add the new Simplex panel.

Thank you in advance!

That is not an easy question to answer in a few sentences. Plus, I know very little about Siemens equipment.

I know the 4007 is designed to be as backward compatible as possible so it can directly replace your 4002 panel. All existing devices should be compatible. An upgrade to addressable can then be done incrementally as the budget allows. Sometimes when replacing with another brand everything has to be replaced at one time. Especially if converting to an addressable system. I also don’t know how “open” Siemens equipment is.

Thank you very much for the informative response. I was 2nd guessing my decision to replace the old Simplex with newer Simplex. The guy from the open systems company was touting how ‘open’ the Siemans system was. He also suggested the proprietary company would charge big bucks for detector upgrades once they got the FAPC in. Oddly enough, Simplex has come in with lower #'s across the board. (Note: No disrespect intended toward any of the MFG’s included in this post)