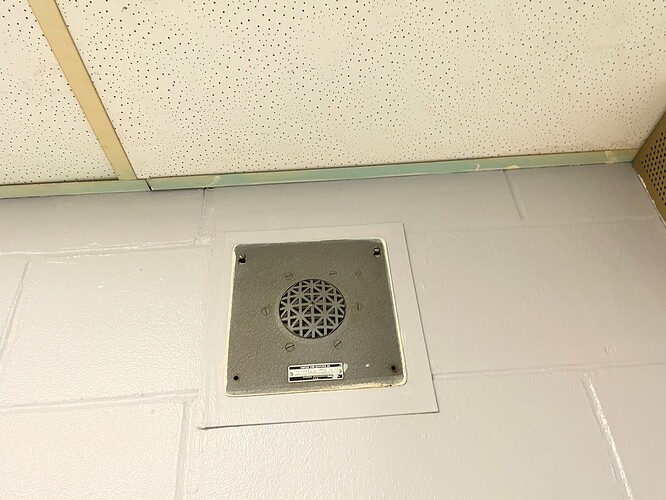 I never realized until recently that the Simplex 4037 flush mount horns are pretty rare, but it makes sense why. When a new system is installed, it is hard to conceal where it used to be, so they leave them in place. This is the case at one of the schools we take care of (that I also attended many years ago). The system is currently a Simplex 4002 with older Gentex GMS horn/strobes, and I never heard those ever go off, so these 4037’s have probably not sounded off since the late 80’s when the 4002 was installed. There are 5 of these total in the school, 1 is completely painted over. The future of this school looks pretty bleak, so the 4037’s and the 4002 may end up in my collection soon.

Nice find, not too often you see devices this old still in buildings! Also nice to hear that you might end up saving them & the 4002 (though why not the rest of the devices including the GMSes?).

That would be cool! I feel the easiest way to remove and hide it, is buy a custom metal plate that’s cut to specifications. That’s what we do during installs, or what I have seen around the field.

Now that’s the way you do it in my book; that is why companies make trim plates & cover plates after all.

My church had these, but they got covered up by 34ts (and more recently truealerts)