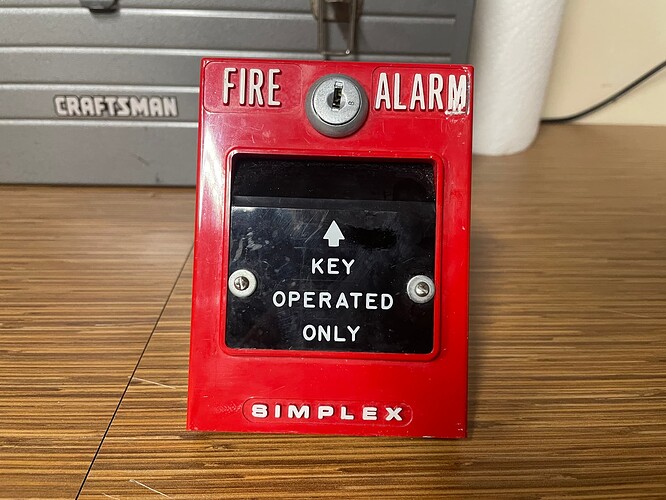 Just got this Simplex 4251-2k in the mail today. It’s slightly different from others I’ve seen. On mine, the top of the black plate is angled into the pull station, where as others I’ve seen are completely flat. I’ve been looking for one of these for a while so I’m glad to finally have found one.

Kinda curious why these kinds of pull station are covered and can only be triggered with a key…
Maybe for some dangerous operation (e.g. Halon discharge, forced power cutoff, emergency drowning/quenching)?

They were mainly used in places like jails and psychiatric facilities, where they don’t want the general population to pull the fire alarm for fun, because one could only imagine the nightmare of having to evacuate an entire prison or hospital due to a false fire alarm. They combat this by giving every staff member a key to the pull station since a staff member is always present. These were the norm until plastic protective stoppers were introduced and these were phased out.

Yes, or if they activated the alarm in an attempt to escape.

You forgot “a key” in your second sentence (as well as “pull stations” since of course there’s more than just one).

You could take something hard and bust the lock on it

I’m pretty sure you’d have to just about smash the entire station to unlock it, since most locks are pretty durable.

Is it possible to trigger the alarms by throwing a cup of water or tea or sth. to the station in order to cause a short circuit, or at least a current-limited situation on the IDC?

Not sure, probably not though since the station’s probably well-sealed when closed.

But couldnt you take one of those medal strings or something and do the saw thing with them. works with sharpies

What do you mean exactly? If you mean stick it down between the front of the station & the backplate to try & saw through the lock, good luck: not only is there very little (if any) space to do so, but as I said most locks are pretty durable, & I’m sure the ones on pull stations are no exceptions.

On the subject of fluids, I don’t think that would be enough to cause an alarm condition on conventional pulls. If you spill liquids on an addressable pull, it might mess up the electronics of the pull, and might signal a trouble code to the panel, but conventional pulls should withstand a small amount of liquids. On the subject of pull station locks, it is only secure enough to prevent casual tampering. I’ve picked the simplex “B” lock before and it doesn’t take much to open it, it’s only purpose is to keep people from tampering with the device, and will not stop someone who’s determined to get inside.

By locks being durable I mean that due to being made of metal they can withstand impact very well, the pull station’s plastic housing not so much.

Ok your problebly right. Ill try it with my not so durable upphote BG-12

No, don’t: it may be a knockoff of the BG-12, but it’s still a unique device. Besides, I’m pretty sure it wouldn’t work with that one either.