Just finished a job today as a helper and saw this when we were draining the pipes. 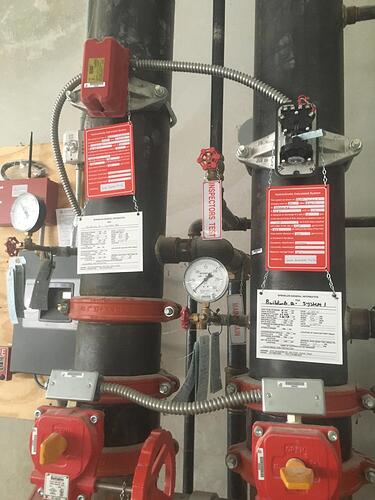 Sent from my iPhone using Tapatalk

My brain must be fried from walking through 76 residential units today staring at sprinkler heads, but I don’t visually see anything wrong. The christmas tree of tags annoys me but not really a deficiency. And you don’t show a spare head box in the picture, but I would assume it’s off to the side.

Unless you are pointing out the closed control valve and chalked waterflow switch - which I wouldn’t count as a problem if you’re working on the sprinkler system. It’s almost SOP for fitters to chalk the flow switch so they don’t have to play around with pulling wires in the panel.

Technically, it’s the chalked switch. The pressure was low because we drained it. I was going to ask about shutting off the zone it was hooked on to, but the guy I was helping didn’t seem to think I knew anything about fire alarm systems.

He literally pulled a tag off the rider, wadded it up, and wedged it between the paddle.

Yup, that’s what they do. I’ve been called out to a couple of sites just to shut down the alarm system for a fitter that didn’t want to deal with it. And hey, I don’t blame them. But I have found some switches that were accidently left like that we’ll after the job was completed. So it’s not fool proof.