Just moved into a newly renovated home from the 80s that has a Square D Earli-Gard Smoke Detector EGD-5S. I tried testing it and the alarm works. Then, I took it off the wall and its covered in cobwebs, but still functions. The problem is that there is a constant ringing that wont stop. Any suggestions? (I have a landlord that likely wont replace it)

Smoke alarms need to be replaced every ten years, so if the smoke alarm is original to the home, that thing is way past its usefulness. Check to see if there is a date on the back. If there is no date, or if the date is more than ten years ago, it needs to be replaced. If your contract allows it, replace it yourself. If your contract says your landlord has to do it and they refuse to do so, perhaps a call to code enforcement will push their hand

The smoke alarm is original and wired into the wall, so I don’t know how to replace it. Thank you for the suggestion.

I would call a electrician

Yeah I’m trying to avoid cost for an already expensive rental. I just want the ringing to stop. Tried flipping the breaker and got a moment of silence but came right back on.

Do the wires go directly into the alarm, or do they go to a plug which itself plugs into the alarm? If the latter, you can buy adapters to change the plug type to match the new alarm without needing to rewire. Can you send a picture of the wiring to the alarm?

I can open the backing again, but there is just a board in there it doesn’t look like there is a battery. 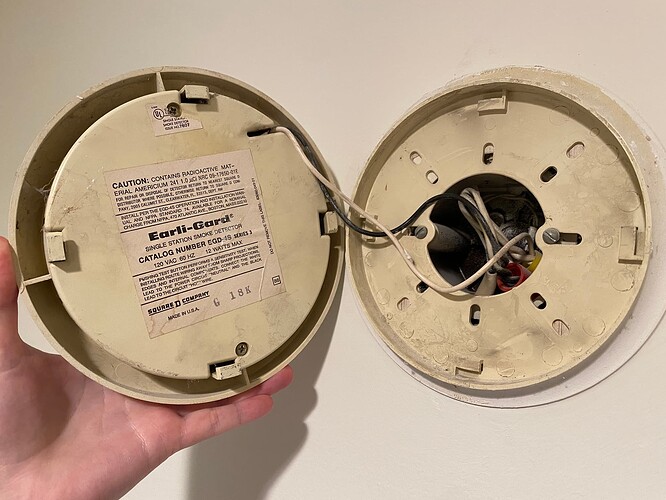 So that is really old and needs replacement. Unfortunately, it looks like to replace it, you will need to unwire in the old one and wire in the new one as it looks like the old one is a direct wire and doesn’t connect to a wiring harness. I would recommend letting your landlord know just how old the thing is and that the sensor is at least 30 years past expiration.

Ok, thank you for your help.