Working on a NSF-640 and getting a invalid response on one sensor in a string verifed the sensor isn’t the problem by swapping it with another one. the fault is not following. tested one before the sensor works and tested the one after the sensor and works. Get green lights on the sensor in question not sure where to go from here. 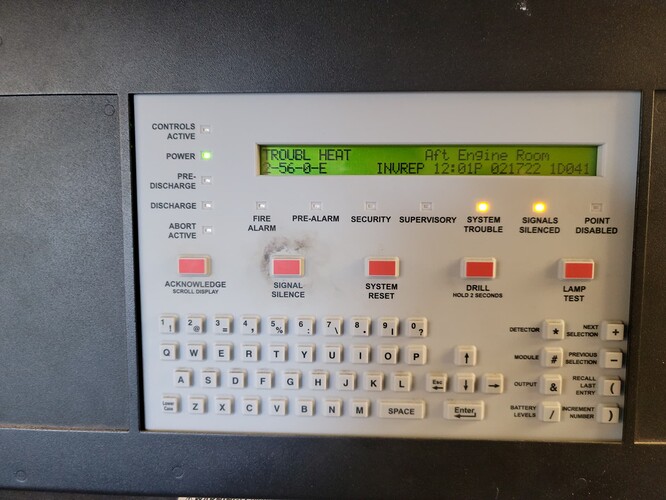 New to working on this type of system they have installed on the these crafts. Any help would be greatly appreciated

Heat detector #41 is not communicating with the control panel. Are there any other device troubles?

Check the manual for that panel - INVREP (invalid reply) usually means that a sensor sent a reply that the panel doesn’t understand/wasn’t expecting. It may also mean that there was no reply from the sensor - some panels will throw a “Missing” trouble, others may use INVREP as a catch-all trouble. So don’t rule out a broken wire connection just yet.
Lawnmower probably has it right - if the devices that come before and after the heat detector work fine, the wiring is most likely OK, and if swapping in an identical known good heat detector (make sure the model #s are identical) didn’t fix the problem either, that leaves us with a bad connection between the sensor head and the rest of the SLC. Most likely that bad connection is the contacts on the base, but if the SLC has T-taps then you may need to trace the wiring down to the next splice box.
If swapping the bases doesn’t help, then it may be time to start verifying the address settings on the other devices. Most of these panels are able to differentiate between “sensor sent bad data” and “multiple detectors responded to the same address” but I have heard the occasional odd story where an INVREP ended up being caused by duplicate addresses.

notifier has a dead address bug, so just change and configure a new address for that detector

Try the head on a different base, if that doesn’t work you can try to upload / download the program (if you have Verifier Tools)… If not, try to set it to the next available address and re-program the address in the panel. As @fvilla stated, some panels can somewhat permanently lock in a bad address despite the device working fine.