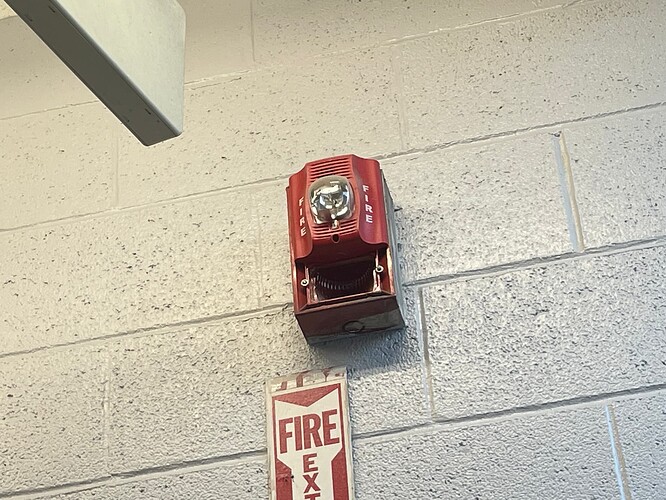 We’ve seen plenty of electronic horns retrofitted onto Simplex 2903 light plates, but this one takes the cake for the most retrofits in a single device. The original horns I believe were Simplex 4050’s, and were changed to Space Age Electronic AV-32 light plates with Space Age Electronic 2DCD horns in the late 80’s. Then was changed to System Sensor MASS horn/strobes. Then at some point the MASS horn died and was replaced with a Spectralert Advance. But the Spectralert was too big to mount to the front of the AV-32 light plate, so they turned the plate around so that they could mount the new alarm. 50 years worth of lazy retrofits.

Oh my God…just remove the whole older alarm & put a Wheelock RP-R trim plate over the hole, then mount the Advance on top of that! You weren’t kidding when you said “lazy”…

We don’t know the full story. Budget could have been short, or time could have been important. Additionally, it is highly unlikely that a company that stocks System Sensor notification appliances would stock Wheelock retrofit plates. Not everything that isn’t pristine is lazy, sometimes it is a matter of circumstance.

I still say: do it right or don’t do it at all.

Well it sometimes depends on the vendors and whom they do business with. Sometimes they have to improvise and use what their supplier offers to them;otherwise, they have to spend extra to get the right retrofit kits, which could cost more and add extra labor.