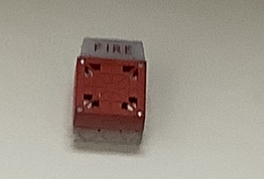 Ah, makes sense. Reminds me of a Pyrotronics-rebranded 7002T I once found next to a Wheelock AS; more than likely the 7002T had been disconnected for years by that point.

I have a few of those that I think Wheelock made for Honeywell as an SC807.

Yeah Honeywell once rebranded a lot of Wheelock’s products (though now that they own Notifier, Fire-Lite, System Sensor, Gamewell-FCI, & Silent Knight they don’t need to anymore).