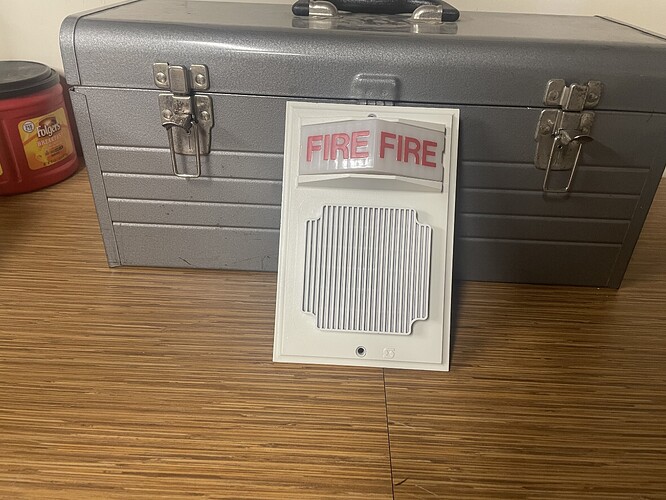 What is probably the most controversial device in my collection, is one of the white Simplex 2903-9735’s from the collaboration between YouTube users FourtyFiftyEighty, Nick Derik, Simplex Guy, and the University of Tennessee Knoxville. It seems like a lot of enthusiasts question the authenticity of these devices, but having seen this device in person, and the background of it, I believe it to be genuine. The paint job is very well done, better than any customer could’ve done themselves on this scale. There is a coat of primer visible from the paint being worn in the screw pockets, and one, possibly two coats of paint. The grill is also very thoroughly painted with no red inside the grill. The speaker, fire lens, and light socket also have no overspray, indicating they were removed during the painting process. It is also possible that this was done by Simplex to fulfill a custom order before it was offered as a separate model, since the 9735 model is the standard red with a single bulb, but also exists a 9736 model, so it’s possible that the 9736 was the 2902 series optioned in white at a later date. Say what you want, but I believe what I have is a genuine device that was modified by Simplex.

Yes I did, I was happy that I was able to buy one rather than trade for one.

These seem to be the hottest topic of discussion in this community.

I think I was the one that requested him to sell them on eBay. I was going to buy one . But the price nearly gave me a damn heart attack when I first saw the listing

Any topic featuring a rare alarm is going to be hot

I’ve never even heard of this device

Me neither. This is my first time seeing this device