I already posted which job this came from, but this is the control panel that was at that daycare. I took it home. This is mine now. Fire-Lite MP-24 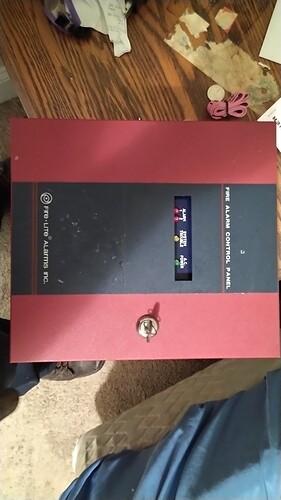 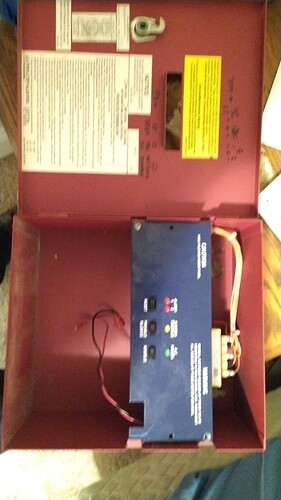 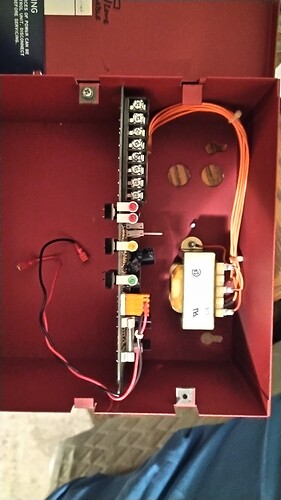 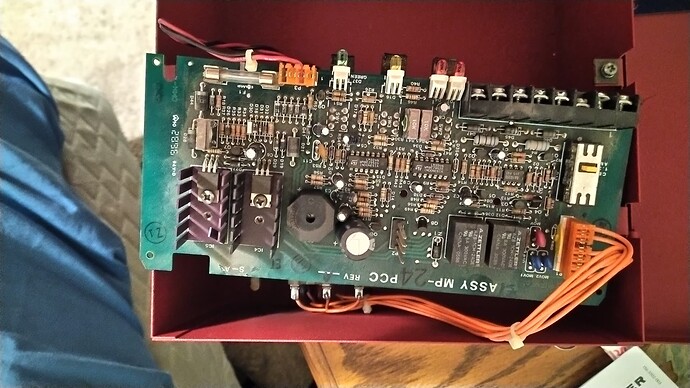 I appreciate your saying so. As a low voltage technician now, I’d say fire alarms and burglar alarms are the only ones I can absolutely get obsessed over and actually bother to study the product catalogs on. Also even though I’m not really into electronics manufacturing, being able to bench test boards and devices and stuff at the house like I would for car parts when I was trying to fix my car. It’s pleasant you do get to learn a little more about the electronics this way.

Sometimes I get upset when apprentices/helpers start mouthing off to me about how they don’t pay us enough for this crap or whatever. I don’t know if they realize how many days I spend hanging out in the garage playing with these boards trying to figure out why they broke. This is also how you learn how to troubleshoot systems out there in the field. Trying to come to these conclusions faster in the future that way I could be a better technician. Also I suppose it might be nice to have a little mini museum in my garage LOL 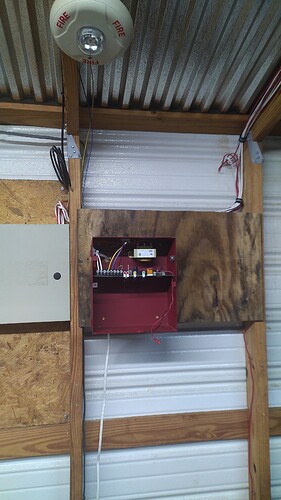 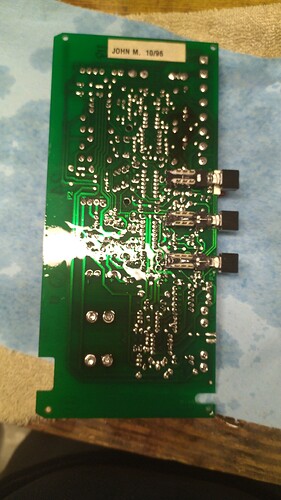 So I spent all weekend giving the panel a bath and mounting it in my tool shed. I also cleared a shelf to place devices. I’m sure if I’d go buying devices, but I’ll probably keep bringing old equipment home. So the trouble led had a broken wire, so a dab of solder joined the two pieces back and now we have a working trouble light! 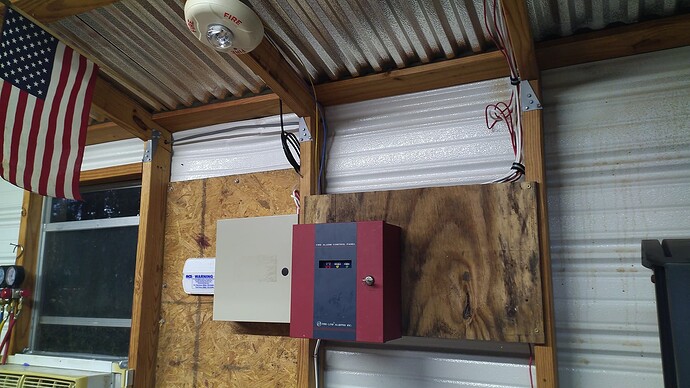 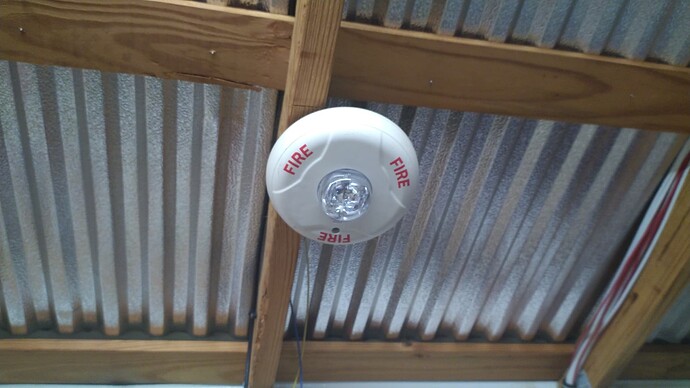 It charged the new batteries to 31.7v from 25.4v, so that’s great. The trouble beep slowed down, but according to the manual it still says it’s experiencing brownout, even though it’s got 122v and the transformer’s putting out 33v. I don’t know if the alcohol bath shorted anything but, either way this thing was cursed when we pulled it from that daycare last week. It functions otherwise, a short on an IDC zone reverses polarity of the NAC and sets the horns off.

It didn’t go into alarm or have an audible panel signal at the daycare, so I don’t know how long the trouble silence was engaged for. Wouldn’t wanna run it 24/7 either way, since I already have a working DSC panel that is a sincere intruder alarm system with fire zones.

Now for the actual collection part; I polished the key that came with that MP-24. It’s just a Fire-Lite, but it’s special because it’s brass and it’s from 1996. 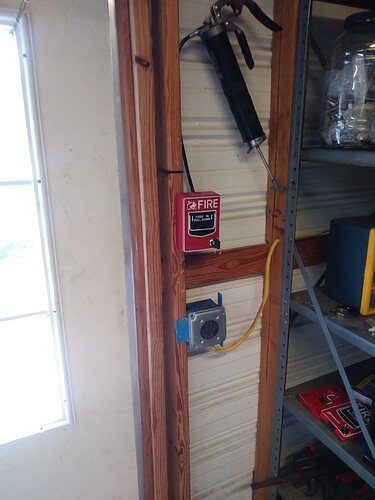 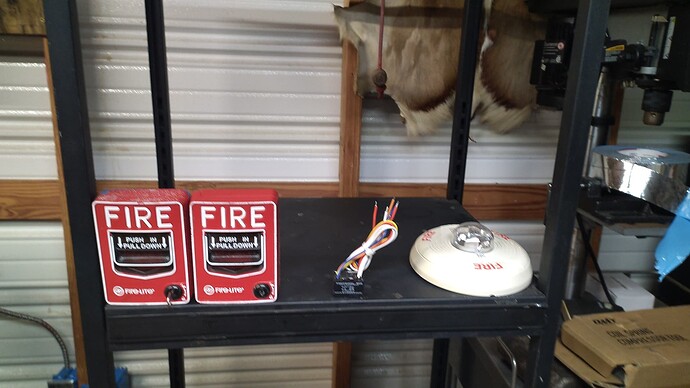 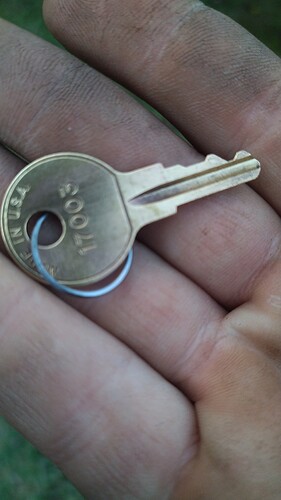 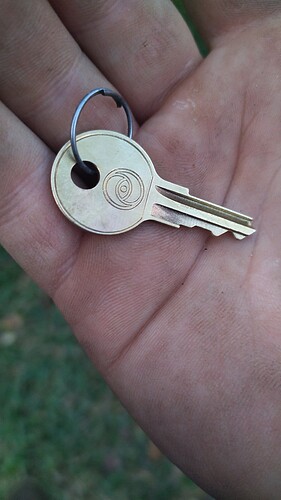 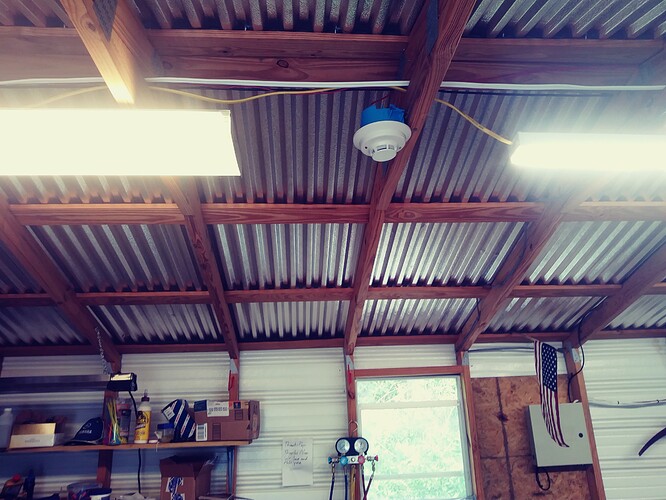 In addition to the Fire-Lite MP-24, wired to the PC5010 is a System Sensor 2W-B and a “UHPPOTE Wired Emergency Fire Alarm Station 9-28VDC Conventional Dual Action Manual Call Point”. Those are my sincere fire alarms in case of a real fire. On the shelf, is two System Sensor Fire-Lite BG-12LXs I pulled from a Bailey’s Gym during a renovation last year, a PAM relay (broken), and a System Sensor SCWH. The ceiling strobe’s also from that Bailey’s job.

Fair warning: that Uhppote BG-12 knockoff isn’t UL-approved, but just the same it seems to work to me (as I have one myself). Just be careful relying on it is all I’ll say I guess (I think it’s arguably better than the actual BG-12 for two reasons, despite the somewhat-shoddy quality & lack of approval: it includes the universal ISO fire symbol alongside the word “FIRE”, unlike the actual BG-12, helping non-English speakers understand what it is & what it’s for, & it has an internal LED that’ll light up when the pull is activated, using power from the zone circuit (only actual addressable BG-12s have LEDs).

I probably should’ve clarified that the pull station and smoke detector was from last year. I’m aware of the light, and yes it seems to work and I’ve pulled it several times since I’ve bought it. No, it’s not UL-Listed. It’s a fire alarm shaped object, much like the sub $1k bicycles you can find at Walmart are bicycle shaped objects that seem to fall apart far too quickly.

Those BGs are the addressable kind anyhow. Maybe some day I’ll come across another out-of-service device and replace it with that.

Not exactly new addition, but rather it was sitting on a table and I almost threw it out. 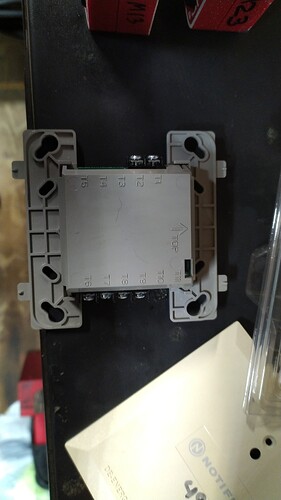 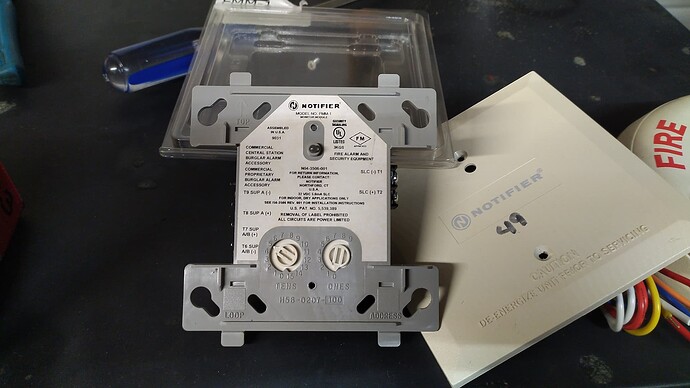 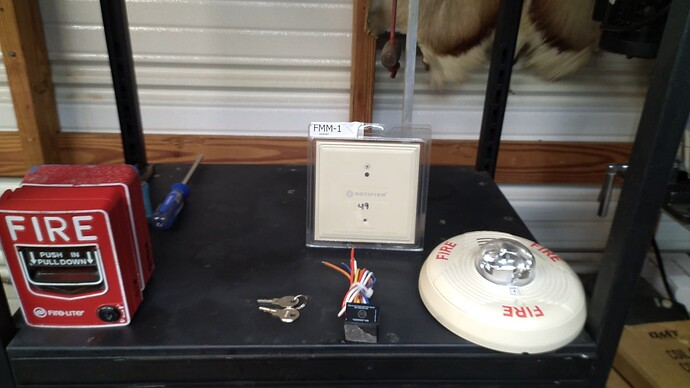 FMM-1, Monitor Module that was used at a Marriott Inn to monitor a sprinkler tamper. The panel there was, I think, a Notifier NFS-320. Invalid response on M049, and the service tech before me concluded that the device went bad. I beg to differ I think they should’ve cut and re-stripped the conductors first, but whatever the customer bought a device, so I put in a new one.

I pulled this one from a Warehouse I am currently wiring. Customer said they want to recycle it if they can. Pennywise pound foolish; you’re already paying over $2,000 to get the install done, but you want to try to save $40 on a single device? I’ll call my boss and see what they want me to do, but it does work and I did clean it up as best I could to get the construction site dirt off.

There are an awful lot of these in Jacksonville Florida. I suppose ADT and SafeTouch where the guys to go to back in the day. Not sure safe touch ever did fire alarms though. 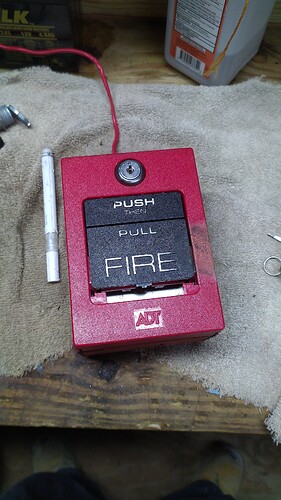 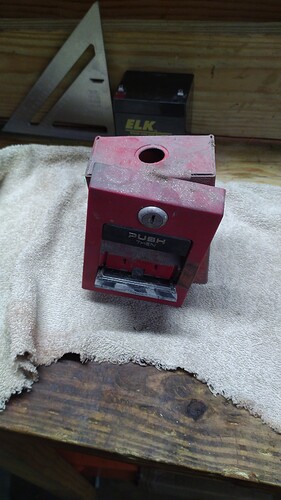 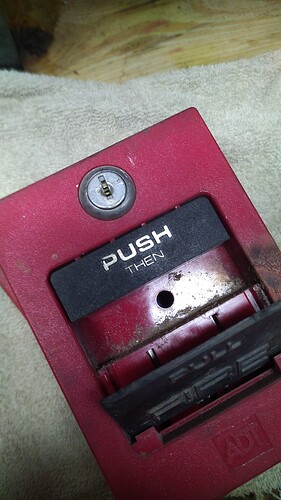 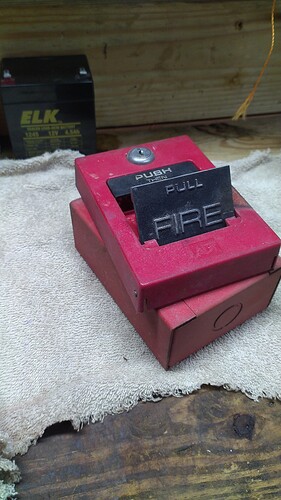 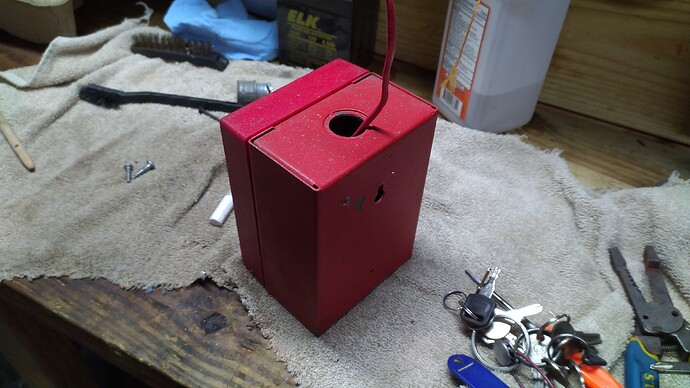 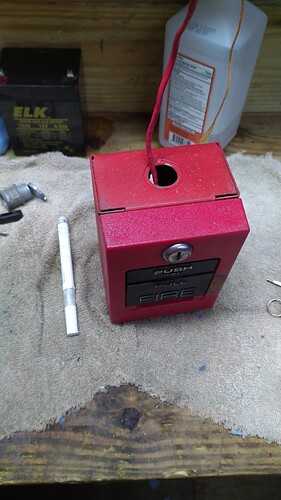 I acquired the original ESL version (which as far as I can tell is considerably rarer than the ADT rebrand) of that pull fairly recently.

Nice job in saving it from being most likely thrown out (or recycled as you said).

Yeah. I know that these pull stations are not common, but they seem to be kind of common where I work because it’s a big city. Back in the 90s, if you wanted to security system or a fire system you didn’t have too many contractors to choose from. All the local alarm companies were residential only.

I don’t think I’ve seen the original pull station irl. I’ve seen ESL control panels from this era still in service, but many of these ADT 5060 pulls are starting to fail to initiate.

Yeah I’ve been in the occasional Publix that had 5060-Ses.

Yeah like I said the ESL version seems considerably rarer than the ADT rebrand.
You mean like the 1500? (I’m not sure if it’s from the same era as the 5060-S, but it’s really the only ESL panel I know of) Also that’s sad to hear, they seem to be fairly well-made & designed to me.

I’ll admit/agree, that last past doesn’t really make much sense, but I think I understand the rest.

@Frylock555, I don’t understand that.

Not sure what doesn’t make sense. For example when I do fire alarm inspections, sometimes you will pull a pull station and it does not initiate. If you unlock it with a key and then release the button by opening the pull station, then it initiates. That could either be a mechanical issue with the pull handle not releasing the button or not flipping the light switch inside, or it really could be that the electrical switch is latched open because it’s old.

Ah, I get what you mean now, the way you worded it just confused me at first.

what are you doing now @Simplex_Dude

Yeah I get it now. Thank you @Frylock555