Hi TFP people. It’s been awhile since I’ve shown off anything in my personal collection. I’ve been very busy with life lately, and really haven’t had the time to be as active on the forums as I would have liked to be. Anyways, a lot has changed with my collection of fire alarm odds and ends, and quite a bit about my collection has been dumbed down as you can tell from the title of my post. Over the past year or so, I’ve gotten rid of a huge chunk of my collection (about 90%), from panels to pull boxes and horn strobes. I’m getting older at this point (21), and with more life responsibilities than ever, I figured it wasn’t necessarily appropriate to have a 5x10 storage locker filled with fire alarm stuff. I hate to go the way of a lot of other older enthusiasts, however it isn’t practical for me to hang on to as much as I had anymore. I’ll still have interest in this though - that’ll never change, and I’d like to become more active in the community. Just needed to dumb down on collecting. Anyways, I kept a few select things in my collection (hard to find or sentimental) that I would like to share with everyone. I’ll put pictures below as well. Anyways, enjoy. 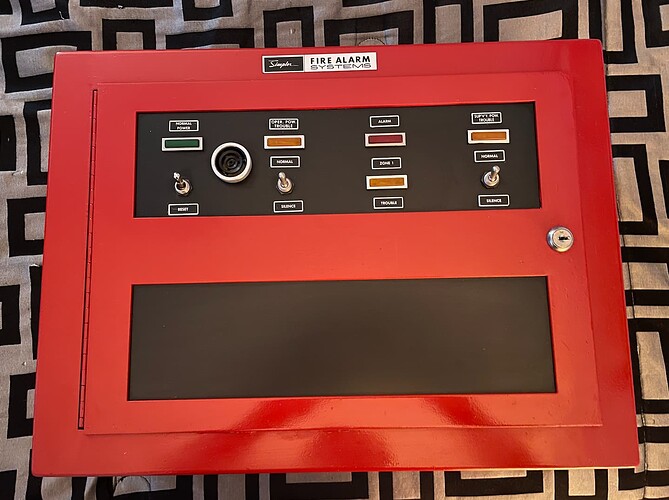 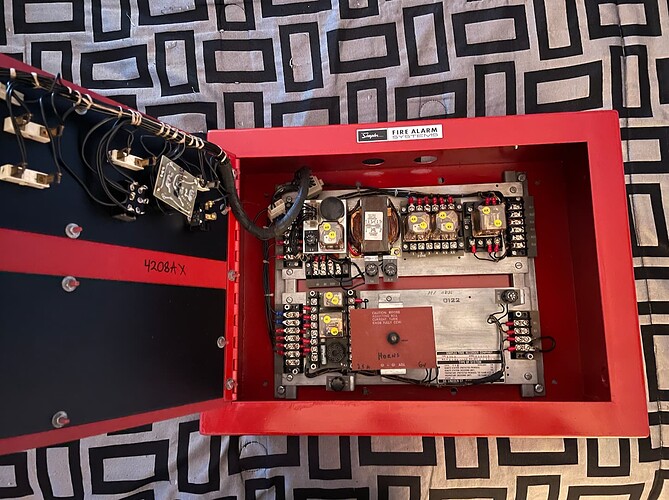 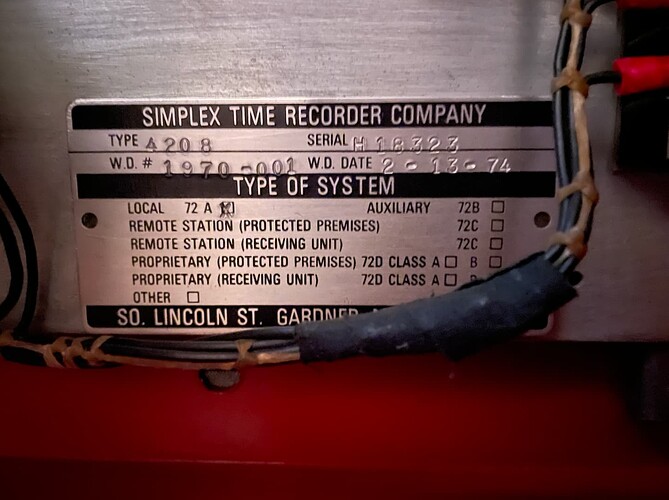 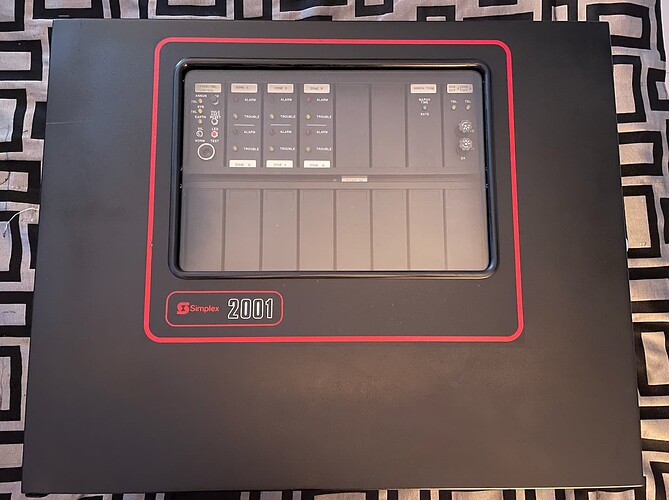 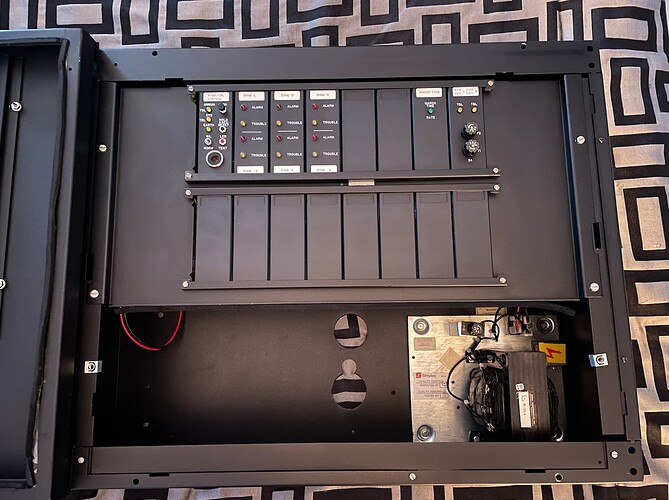 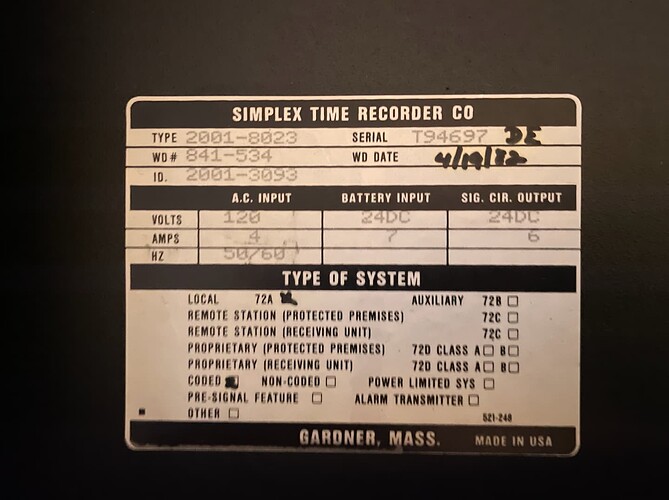 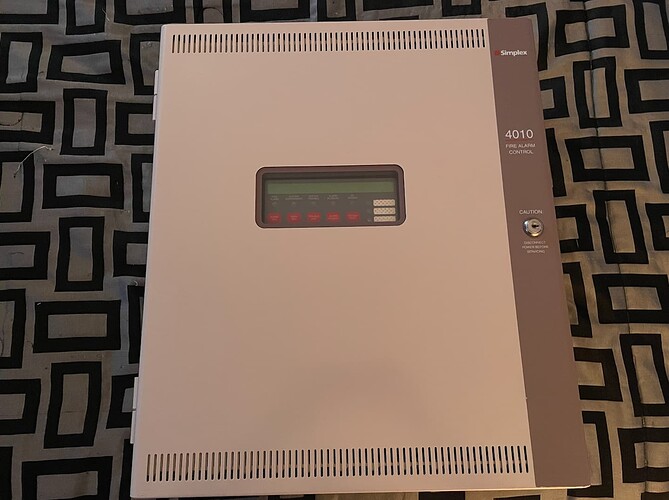 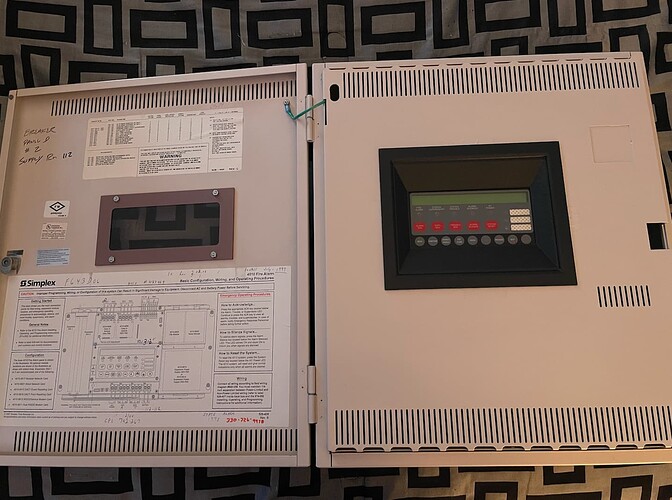 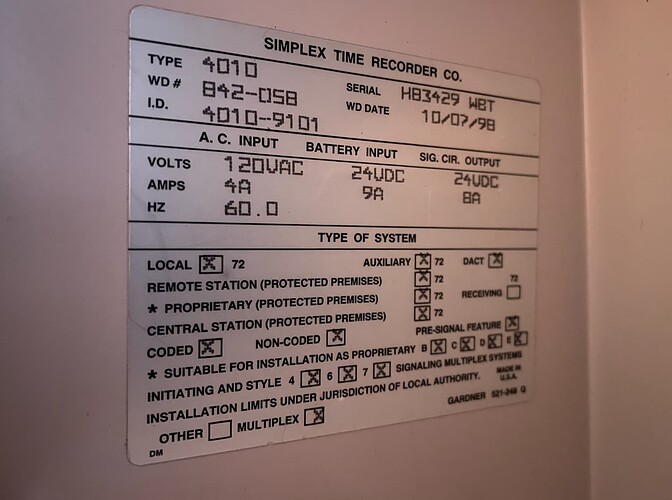 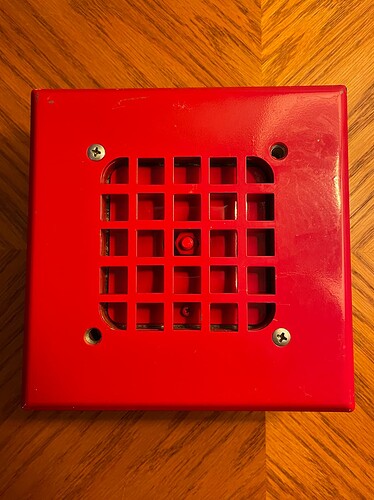 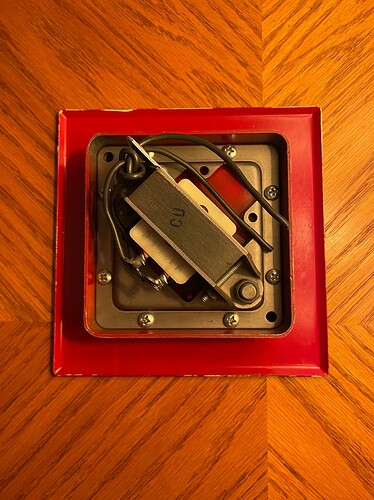 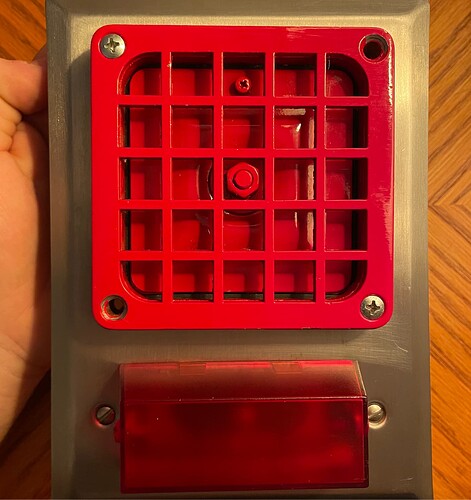 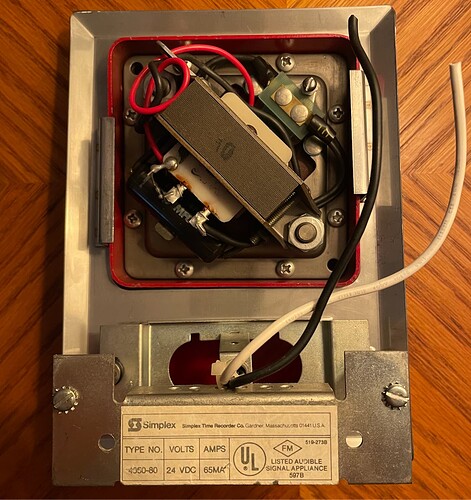 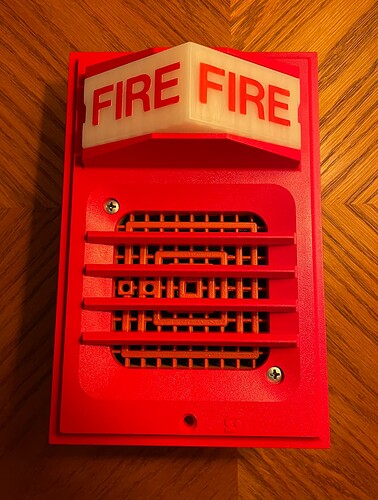 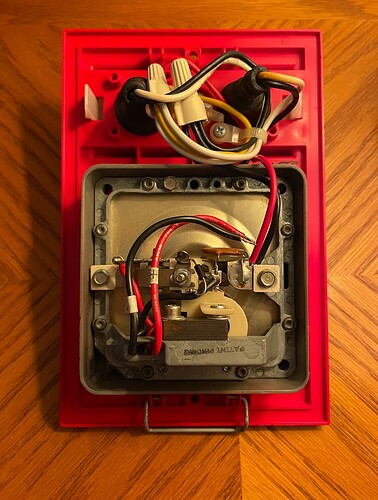 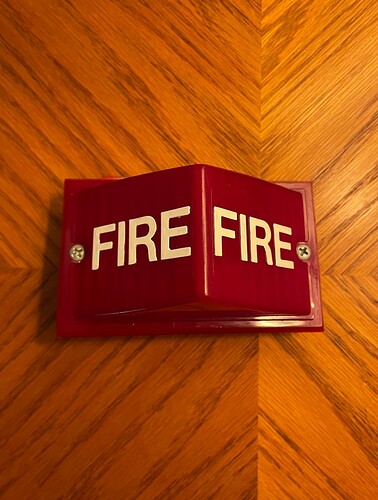 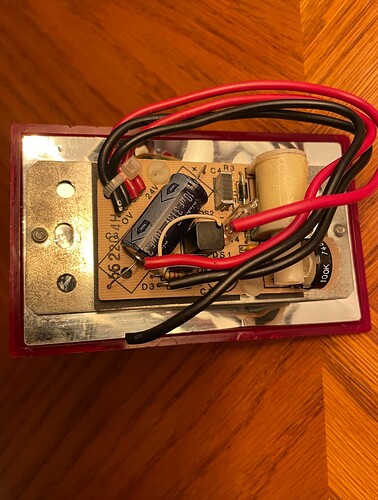 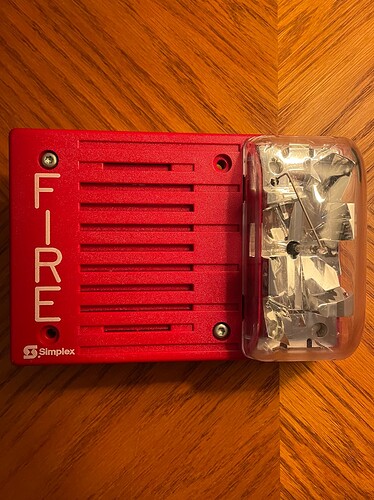 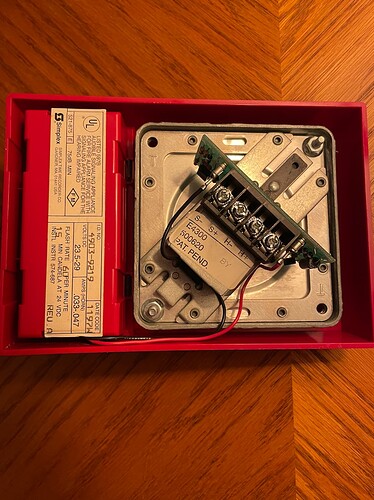 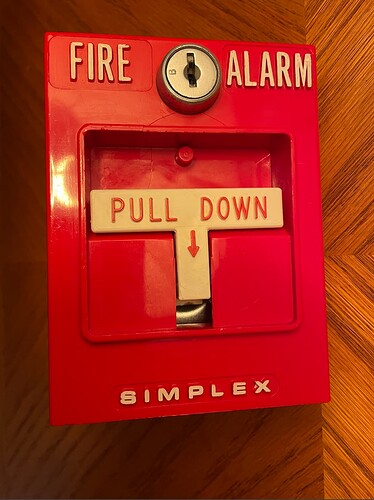 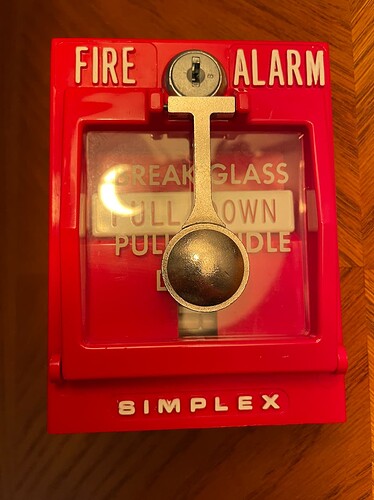 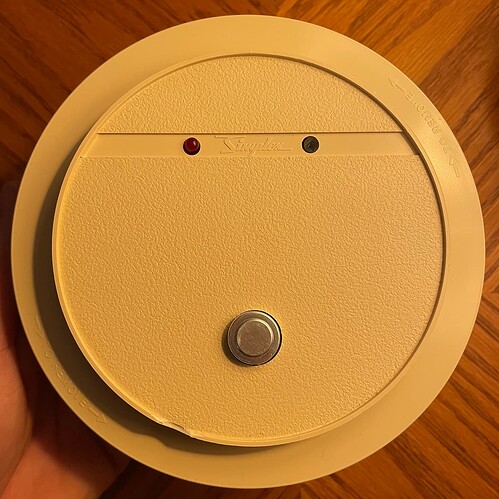 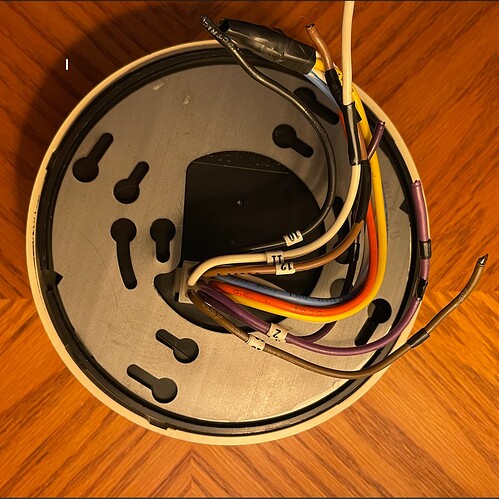 Before I end this post, I should also say that I am considering parting with a few more pieces in my collection rather soon (none of which are listed here, however). I’ll end up posting something in our flea market when I’m ready, so if you guys are interested in some of the items in my collection, keep an eye out there for a post. Not sure what exactly what I’m letting go out of what I have left, but I’ll let everyone know once I figure it out. I won’t be charging much for anything at all, and I am open to trades. Anyways, thanks for reading. Take care everyone.

Wow, I think you’re the first collector I know to have an extremely rare black 2001! Is there a reason why it doesn’t appear to have a lock on the door though? (like one would expect a FACP to have)

About the 4208AX: what does the “AX” in the model number stand for?

Nice collection, even if it is now significantly downsized.

Years of waiting. Trust me, it took me a while to track the panels down. I started collecting almost fourteen years ago, and was just able to find my 2001 and 4208 within the past year. Both actually came from people off of Facebook Marketplace. The 2001 was removed from a building at Ohio State University, and the 4208 was removed from an elementary school in the Akron, Ohio area. As for most of my devices, eBay and dumpsters from local building demos have been my best friends.

Thank you! Actually, IIRC, someone else had a black 2001 before I did. There used to be someone in the community that had a really large 2001-8001 around 2010-2011. I’m not sure what happened to them or what happened to that 2001, though. And it does have a lock, it’s just off to the side of the door instead of on the front of the door itself.

I wanna say that was jjvideo25, who at one point unlisted all his fire alarm videos & then thanks to Youtube had them all privated, but I’m not sure.

Ah, that’s what I thought.

Doing a quick search on google images, I actually found an old picture of the panel I was thinking of. It appears to have been owned by bearlovesox (according to the picture’s info on Flickr) rather than jjvideo25. But now that you mention jjvideo25, I feel like he had a similar panel as well. However, it’s been so long, it’s hard to tell. 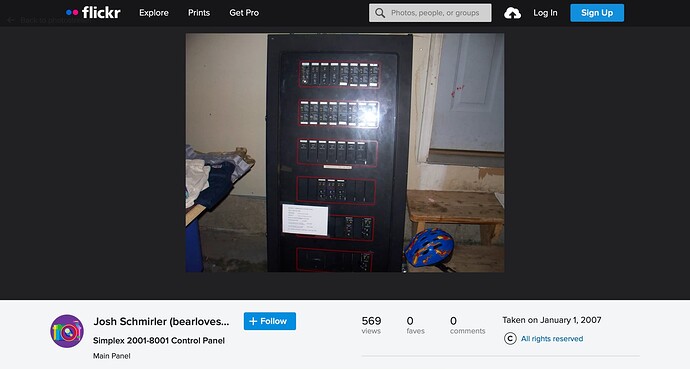 Maybe that’s who I was thinking of.

Awesome collection, never knew there was another enthusiast/collector in PA other than me!

I absolutely love your 2001! It looks like it’s in mint condition and seems to have just the right cards for a nice hobby system.

This is my favourite style of cabinet for the 2001. I always thought it was unique that these cabinets included a power indicator; I don’t think I’ve ever seen one of these indicators in a different style of cabinet.

Thank you! Likewise, I thought I was it. Where in PA are you from if you don’t mind me asking? I’m about 45 minutes to an 1 hour north of Pittsburgh.

Ah, so you’re on the opposite end of the state. Cool to know there’s another collector in PA though.

Today, I was able to add two more very unique items to my collection. Both of these panels were removed from a small educational campus undergoing a panel upgrade (upgrading to an addressable SK network). 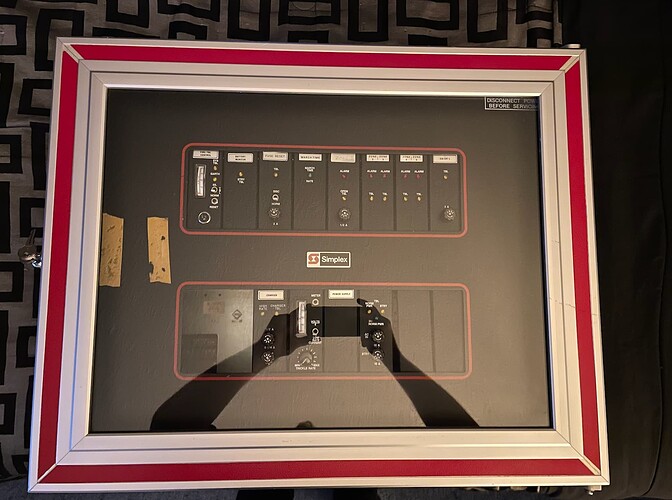 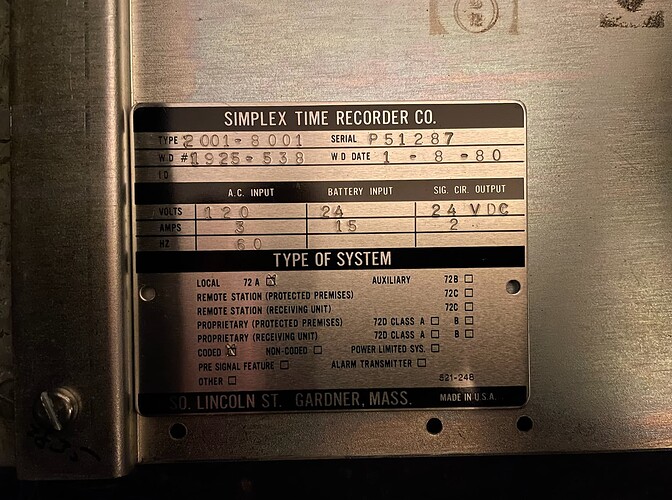 The first panel is a Simplex 2001-8001, with a wiring digram date of January 8th, 1980. I believe this panel would have been manufactured between December of 1979 and January of 1980, judging by some of the date codes etched on the boards inside. Unfortunately, this panel will need a lot of electrical work to become functional again, as the main wiring harness inside has been cut. It features 5 zones and 1 bell circuit coded via a marchtime card. 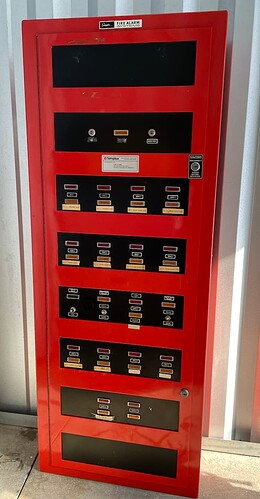 The second panel is a Simplex 4208AX. This 4208 is significantly larger than my other 4208, and weighs about 180lbs fully assembled. It features 15 zones, two AC bell circuits, and a code motor for coding both bell circuits. I am not sure of the specific date of manufacture or wiring diagram date since the tag is missing, but I am assuming it was around January of 1974 judging by notes written on the inside of the panel. Like the 2001, this panel also needs some re-wiring to get it working.

I almost decided not to get these, as I really wanted to keep the amount of panels I had at three rather than 5. However, as uncommon as both of these are, I decided to take them both. After all, it’s better than them being tossed out or destroyed.

Wow! I’m glad you decided to take them in Nick, because you’re right: they are very rare panels. It certainly is better than leaving them to be tossed out or destroyed.

In a way, so am I. Both need a lot of work, which will be a daunting task given the next-to-zero wiring diagrams and schematics available for both (and my limited time), but I think it’s worth it. Would love to show everyone what these systems look like and how they function when working one day. I don’t believe there are too many examples of early 2001 and 4208 systems out there. Definitely pieces of Simplex history.

Yeah I’d say it’s worth it too. Best of luck on restoring (or at least fixing) them.

That’s all you got so far?