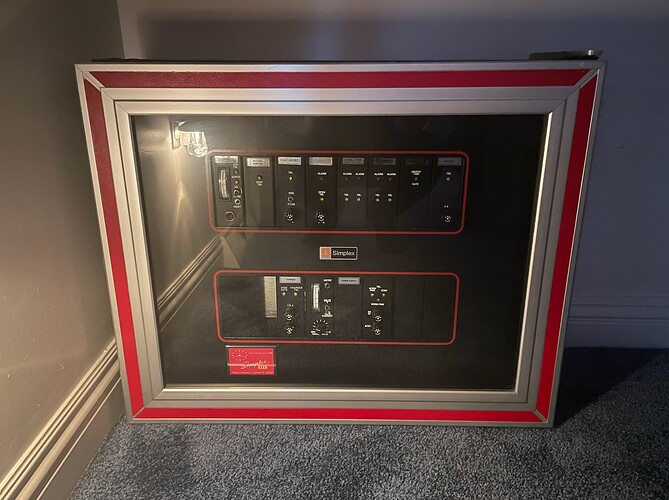 As some of you may have seen from my collection posts, over the winter, I purchased this Simplex 2001. This model is a 2001-8001 from around 1979, and is the “full-sized” 2001, not the repack series. If you are familiar with the 2001, you’ll know that the cards and components are wired together inside with a wire harness. Unfortunately, the technician that pulled this panel from service sloppily removed it, cutting and dismantling the wiring harness in several places. I have been working on finding the right documentation for the 8001 series, but most of what is on the internet is for the more common repack series (like the 3080). Does anyone here on the forums have 2001-8001 wiring diagrams (specifically for the power supply so I can get it wired back to the main boards up top), or know where I can go for help getting this panel rewired? My biggest fear is wiring this panel incorrectly and accidentally damaging it. 1st generation 2001s like this one are irreplaceable and impossible to find, so I really want to make sure I get it wired back up correctly without causing any damage.

That looks like an amazing panel, congrats! I don’t know where people on here are getting these 2001s from, but I’m getting jealous lol! I usually collect old Edwards alarms, but the Simplex 2001 is one of the few non Edwards panels I really want. Along with some older Simplex ‘STR’ era stuff.

Anyways, someone else on here is also restoring a 2001, here is the link to the topic:

I just received a Simplex 2001 today from a technician. Never thought I’d own one of these pieces of Simplex history but here we are. I tried looking up documentation online, but couldn’t find exactly what I’m needing to get this operational. It’s in great shape and is from 1982. The pictures I took show it how I received it in what I assume is the original set of cards in the order they were wired in. There are a few black jumpers on the main board, but I believe some of them are missing, as t…