What rare combo of fire alarms have you seen in a building?

I once saw a SpectrAlert Advance with a Simplex Chevron Pull Station. They were both brand new. They must of gotten the chevron in “new old stock”.

I’ve been in an Embassy Suites that had those Wheelock ET Speakers with the non ADA horizontal strobes on top (Like the 7002, or 3, or 4) and Notifier LNG-1R pulls. They also had some pretty interesting detectors. (BTW I cant upload pictures, says page has expired) And, on a side note, “Chevron” style pullstations are still made, I believe by Faraday. I’m unsure whether Simplex still makes them.

Not sure if it counts as being a rare combination since the signals were installed during a retrofit, but my high school has round Standard Electric Time pull stations paired with EST Integrity horns. A building at my university also uses a rather unique setup: the pull stations are bilingual Simplex 4251 T-bars while the signals are Amseco motor horns installed behind 10" bell grilles.

Here are a few photos of other unique or rare setups I’ve seen in buildings (most of which are retrofits):

Fire-Lite BG-12 and Federal Signal 450 at a hotel in Fort Lauderdale, FL

Fire-Lite BG-12 and Edwards mini-horn/strobe at a hotel in San Juan, PR

Mirtone 73303 pull station and Federal Signal 450 horn (both rebranded by ADT) at a building in Niagara Falls, ON

Here’s an unusual setup of sorts, that used to be in my college’s Fine Arts building… 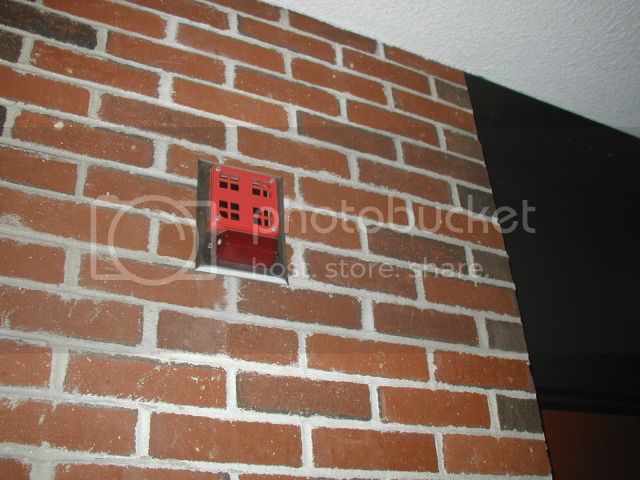 Though in here and two other buildings, you WILL find the SpectrAlert Advances used with the old Simplex pulls (4251-20s, many with Stopper IIs.) Though they use addressable panels (Fine Arts and Administration both have Notifier NFS2-640s, Field House has a Fire-Lite MS-9600UDLS), they kept them set up in conventional style, and replaced the panels and signals, installed new RTU units, and replaced several existing heat sensors with smoke detectors (except for the Field House.)

And speaking of that adapter, here’s another unique combination that used to be at my college, in the Science, Technology and Business buildings:

They installed new addressable Notifier systems rebranded by Johnson Controls (previously they had two-zone Standard Electric Time systems from 1972), and this is what they initially had then: the VA4 horn/strobes with NBG-12LX pulls. In 2012-2013, they replaced the VA4s with Wheelock Exceder horn/strobes on large trim plates. 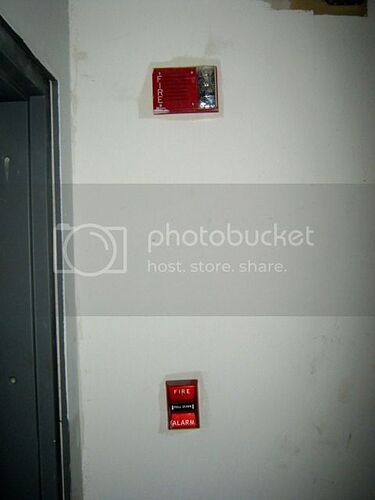 This is in the boiler room, which was redone in 1998, and was when that Simplex 4903-9236 was installed. I do not know why they used those Federal Signal/Autocall pulls, as I can tell they were most likely installed in 1998 as well. 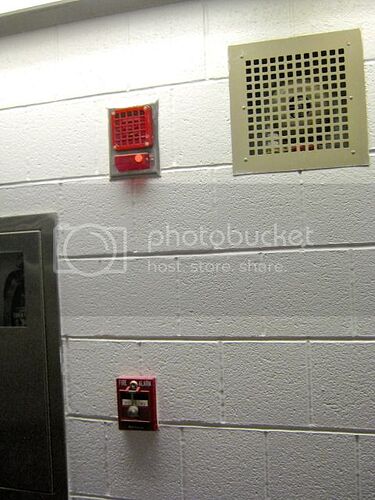 The only one I can recall was an Older Edwards 270-SPO (looked like mid 50s-60s made) installed in a school which was built in the 90s and had a Notifier system in it.

I notice that a lot of these odd combos are caused by replacements by different companies taking over the system from the original installer. If you see an odd combo in a building and only in one spot, then it’s probably a replacement. Also don’t forget that when a system is changed to addressable, they have two ways to handle the pull stations – ether stick a monitor module behind each station or replace it with a new addressable station.

My middle school’s main alarms were the Edwards 892 series horn/strobes, but the main pulls were ESL 103-01 pulls. What’s even weirder is that on one side of the school, there is an ESL rebranded RSG Lift and Pull T-Bar installed, and, although it wasn’t directly underneath an 892, the pull and the signal weren’t too far away from each other.

I don’t know if this would be considered as a rare combo or just odd, but one of the science rooms (which had completed remodeling circa early 2006) at that same middle school had installed a SpectrAlert Classic with a BG-12 underneath it, near a back exit, but for some odd reason, an 892 horn/strobe was installed towards the main entry way in that same room.

At my high school there were 3 Siemens U-MMT-MCS horn/strobes installed in one hallway (which I have called it the “U-MMT hallway”), and 2 of them had Fire-Lite BG-10L’s underneath them, with Stopper IIs over them. Those U-MMT’s most likely replaced 7002T’s since those were the main alarms of that school (most likely from a major system overhaul done back around the mid to late 80’s since the high school was built in the mid 50’s). And in 2012, some of the 7002T’s were being replaced with EST Genesis horn/strobes w/ trim plates. One instance of this resulted in an EST Genesis horn/strobe mounted right above a BG-10L pull station, also with a stopper cover over it.

There’s more that I remember, but I’ll post about them at a later time.

My middle school still (surprising) has Simplex 4051 horns on 4050-85 light plates but the pulls are Edwards 270A-SPO pull stations. There are still some remnants from old Edwards Motor Horns left in some places and because the school was built in 1930, I’m sure the 4051+4050-80s were upgrades but they left the pull stations.

High school was even rarer. While the main building has Simplex 2099-9756s and Simplex 4903+2901-9838s and 9219s (also in the Aquaculture Building). There were also SAE 2DCD+AV32s (now replaced with Wheelock Exceeders), a newer SpectrAlert Classic and an outdoor Wheelock ASWP on the Aquaculture Building. The modular building on the other hand, decided to have Edwards 270A-SPOs and Edwards 892 horns (the ones that can change pitch). I don’t know when the modular building was added.

I don’t know if this was a rare combo for say, but it was different.

As for a panel, I never could find one, but I have confirmed that it is not connected to the main school EST panel since it is a whole separate building/area

Forgot to add that the Gentex strobes was a replacement for some sort of Simplex device after the classroom’s were added to the ag area. Also, slight typo, the classrooms DID NOT contain any pull stations. Just the barns and the greenhouse.

I once saw a Siemens system with simplex 2099 pulls and fos horn strobes. It really puzzled me to see a system like that.

I once saw a Siemens system with simplex 2099 pulls and fos horn strobes. It really puzzled me to see a system like that.

Do you know what company serviced the system?

I do not know who serviced the system because a few years ago, the system was replaced by a fire-lite MS9200 with fire-lite BG-12LXs and spectralert advances. I was bummed because it was the neatest setup I’ve seen since the simplex 4010 system I saw at a store one day

I have also seen a simplex 4245 system with simplex 4050-80s with fire-lite 450s on it(I checked the tag). The pulls were Kidde b4 pulls and the smokes were doorknobs. In 2008, they replaced the system with a ms9600 with the usual setup except with spectralert classics.

That’s actually a very common combination of alarms. The newest addition to my high school has this.

Really? I thought it was weird

Really? I thought it was weird

Not at all. I see a LOT of places with Wheelock AS’s and BG-12s. The baseball stadium where I work as our local ball team’s mascot has that setup as well.

Sorry for the quality (these are video stills) but I found this interesting system with Faraday Chevrons and EST Genesis horn/strobes.

That’s actually a very common combination of alarms. The newest addition to my high school has this.

Ditto for me. My whole high school has that system combo, minus our ag area which are not on the main school system. (In fact it might not be on a panel at all)