In almost every part of the world from the United States uses the ISO Standard Exit Sign. It uses the “running man” design in addition to placing the word “EXIT” as needed. 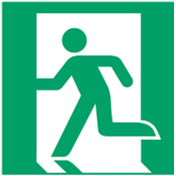 (If you’re a bit new to the ISO exit sign, you can watch this handy youtube video here: https://youtube.com/watch?v=i5uSlAw8U9s
However, much of the US continues to use the boring old red/green exit sign design for every single building, with the exception of New York which currently has both exit signs in place for certain buildings. I find this to be a bit of a problem because the US is already visited by many internationals who don’t speak English and it’s important to communicate the egress signage as much as possible to those of other languages if an emergency occurs. Additionally, red is usually a color for stopping, danger, or prohibition, in addition to fire safety equipment.

Why are we not using the ISO exit sign? Is it because of NFPA or other building codes that currently mandate these requirements? Could we possibly change that national or other codes to start introducing these into buildings?

I also wished they did that so people from other parts of the world. So I agree with you.

Here in Ontario, these signs have been required for new buildings since 2014. They’re becoming extremely common in my area, both in new buildings (or buildings that have been recently renovated) and in older buildings that are upgrading their exit signs. I’m not sure if other provinces or territories have adopted similar requirements, but it appears that the popularity of these ISO signs is spreading throughout the country (I’ve seen some in Quebec, for instance).

It’s pretty cool to learn that they’re also being used in New York! I wasn’t aware that these signs were starting to gain popularity in certain areas south of the border.

Here’s an interesting photo I took at my university, showing both types of exit signs side-by-side: 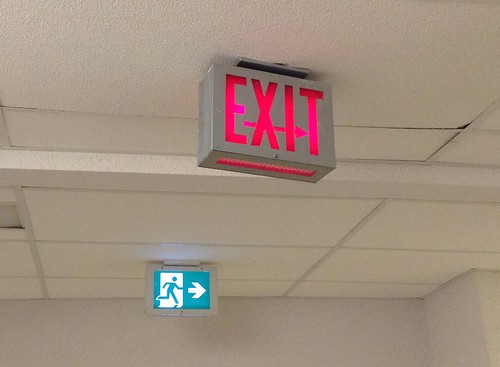 That actually looks really cool! I wouldn’t mind seeing other exit signs like that instead of the ones that we have now which are outdated. That would look very nice!

This is actually something I have seen. (Not my photo.)

I’ve seen older non-ISO signs (pictured below) that look similar to the one featured in your post. Strangely enough, these non-ISO pictograph signs appear to be uncommon outside the Toronto area. 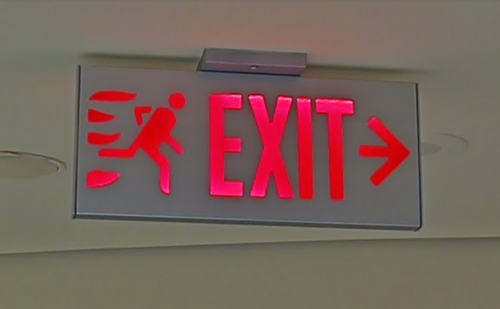 Photo is from Street View at the CN Tower.

Have to admit that one looks even cooler because of the person running away from the flames.

So… I’m at UMass Boston, and guess what I saw in the Integrated Sciences Complex (opened 2015)? 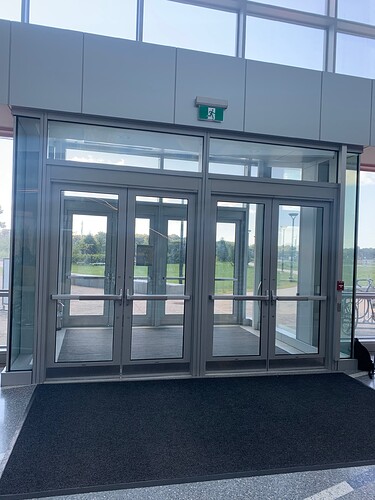 image1920×2560 387 KB
Yes, that’s right, an ISO exit sign in the US - and it also doesn’t have “EXIT” wording!
The rest of the exit signs in this building and across campus are the normal red “EXIT” kind.

Personally, I’m a big proponent of the ISO exit sign.

I’m all for either using a combination ISO + English “EXIT” lettering sign (similar to the one Chupacabra showcased), or even one that I think is probably the best design anyone could come up with: the word “EXIT” printed in English, the ISO exit symbol, & then “EXIT” in the country’s main language (for example a sign in Japan would have “EXIT” printed in English, the ISO symbol, & then “EXIT” in Japanese as well). Figuring out how to use both green & red at the same time somehow however is another thing entirely (maybe alternating between the two colors, which might also help with visibility)

The lettering-and-pictogram approach is what Boston’s transit system uses in renovated stations.
I think it would be a great way to start a transition. 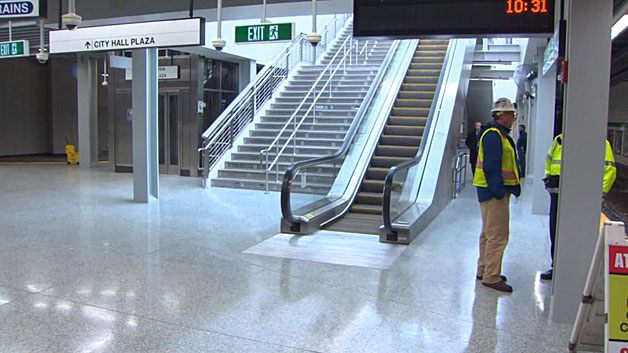 I’m not to big of a fan of ISO. I think ISO would be good for places where there is a high amount of people outside the United States (like international airports) but it has to have green exit lettering next to it the ISO symbol. I prefer the green or red exit lettering that is being in use in the United States. If ISO got implemented nationwide, it should be a alternative to the traditional exit signs.
I don’t think ISO would work out well for America for 2 reasons

-Most Americans won’t know what the running man icon means

-It would get political in some way (calling ISO “globalism”)

Should ISO exist in the United States?
I say yes as long it co exist with the the other exit signs.

Should it replace the existing exit signs signs
NO

As I said, I’d want to see either a dual English “EXIT” + ISO sign or a triple English “EXIT” + ISO + “EXIT” in country’s main language sign in use if the ISO symbol became standard worldwide. I honestly think the latter’s a good idea to help people not familiar with English know where an exit is.

I don’t really mind either of the above kind of sign replacing existing exit signs, though I do hope that the majority that are replaced are preserved & maybe even put on display in museums.

though I do hope that the majority that are replaced are preserved & maybe even put on display in museums.

Sorry to burst your bubble but People are going to throw them out no matter what. This already happened with older signs which was made to last a long time being replaced with cheap Chinese generic exit sign garbage that everyone rebrands because they want to save money by people who doesn’t care about quality because they want to save money. The only people who are keeping these old exit signs around are the exit sign collectors.

Well then I guess it’s up to us to save any we’re able to get ahold of (which of course will be rare since we’d have to be at a building the day the signs get replaced, which could be anytime).

As for the “cheap Chinese signs” you speak of, that’s modern-day consumers for you; they’ll buy whatever is cheapest, not even caring if it’s the best quality or not, just like how most modern-day companies value profits over customer satisfaction & employee safety.

Yep, a tragic case of profits over quality and consumers.