I thought I’d show off my very small (2 devices) collection, so here it is, I apologize if the pictures are somewhat large:

This one happens to be the first device I got in my collection, I got it NIB (which is kind of rare for a device of this age) it’s tough to activate (thick plastic membrane) and resetting it is not easy at all. 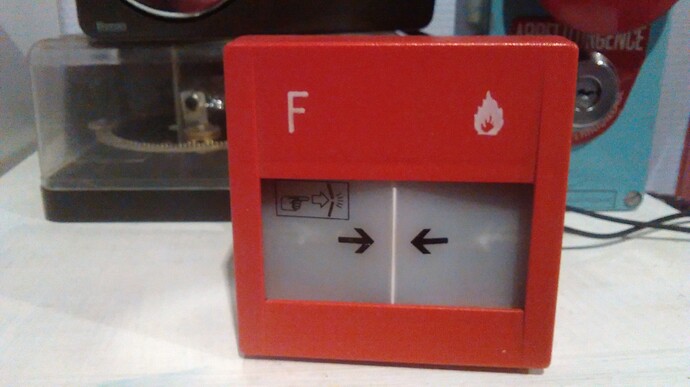 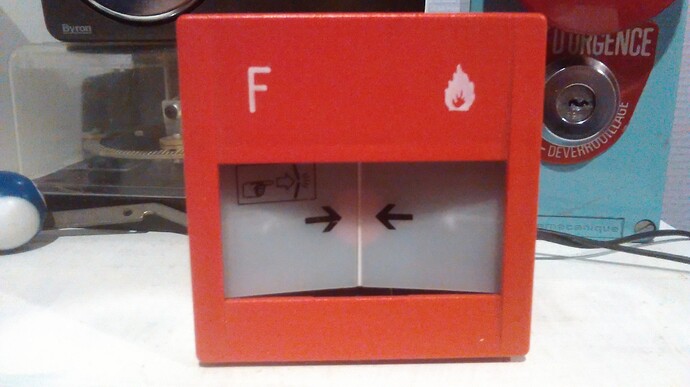 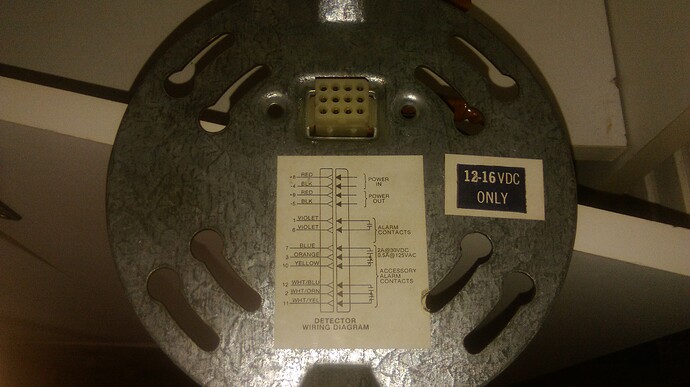 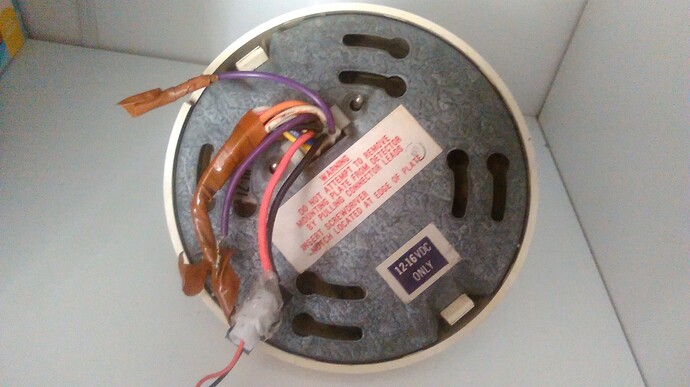 Nice! It’s always good to see foreign fire alarm equipment, since most of us here are from the United States and Canada.

It’s not a fire alarm device, but rather a general signaling device… Anyways here’s it:

Nothing special, just a very loud vibrating bell. These are also used for general signaling purposes, this particular unit came from my old school. It served as a class-changing bell before being replaced during renovations and it still works. 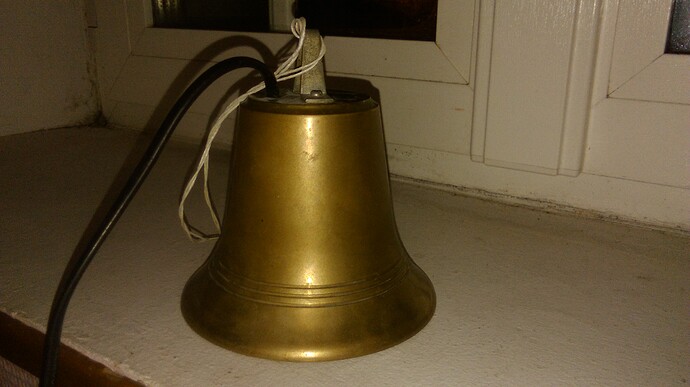 
Here’s the mechanism, you can see the hammer (the small metal bar, notice the coil underneath), for some reason my phone turned in portrait view, messing the picture up:

Nice equipment you have here so far! I can’t wait to see more stuff that you get!

It’s kinda late where I live… But after some time I’ve got some devices to add to the collection! Just a warning: The pictures might be huge and turned… blame my phone for taking pictures in portrait mode and for the huge pictures… I’m sorry :lol:

I have like 20 of them, all untested (I need a panel to do so) else they are nice paperweights (lol) 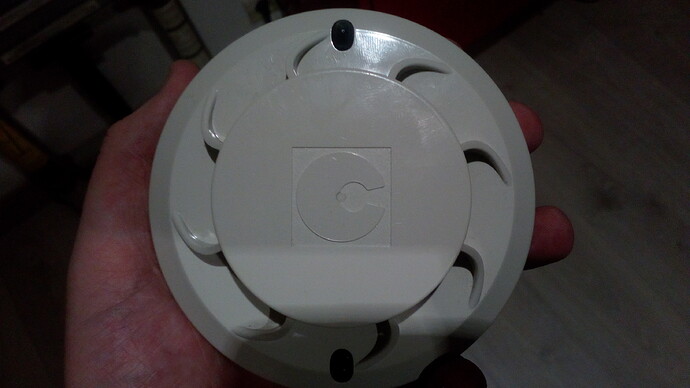 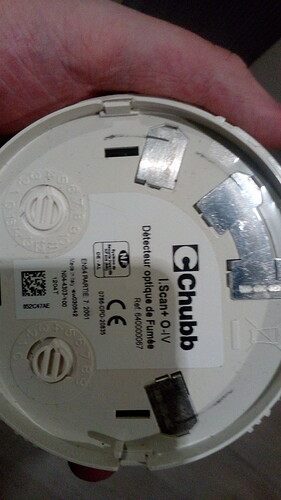 Conventional smoke detector, it’s optical and came without its base :x 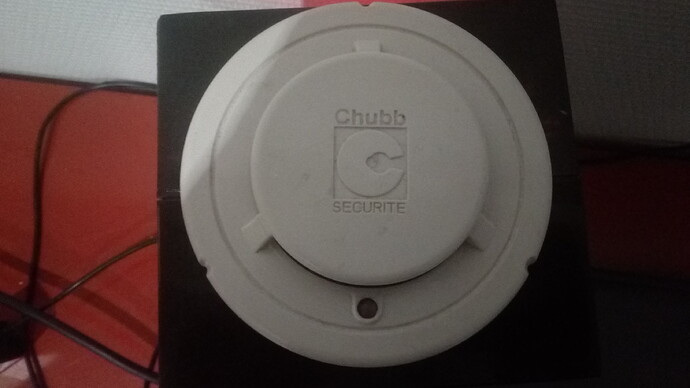 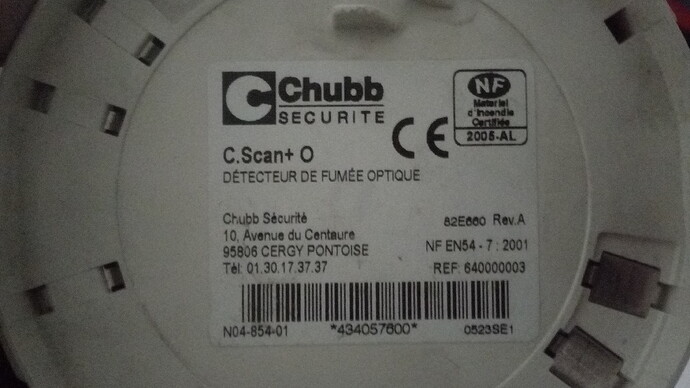 Unfortunately, this one didn’t came with a key… I’m obligated to pull it apart with a screwdriver (carefully… I don’t wanna break it)

IDLE (you might have to use a mirror to see this one :lol:): 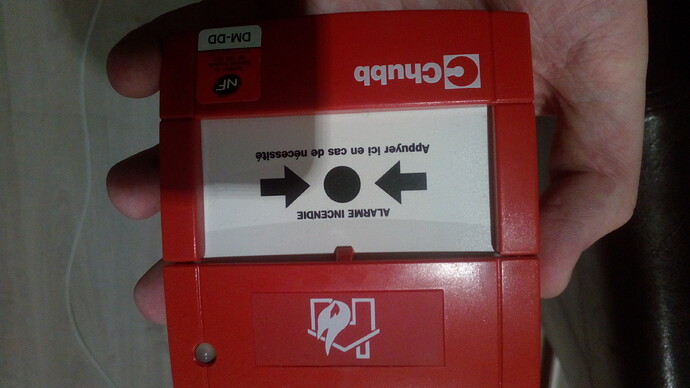 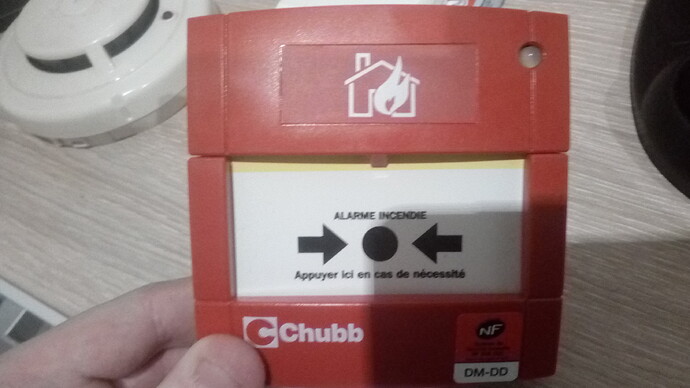 I found this common (in the USA and Canada) detector in a garage sale… It’s kinda rare to come across one in Europe! 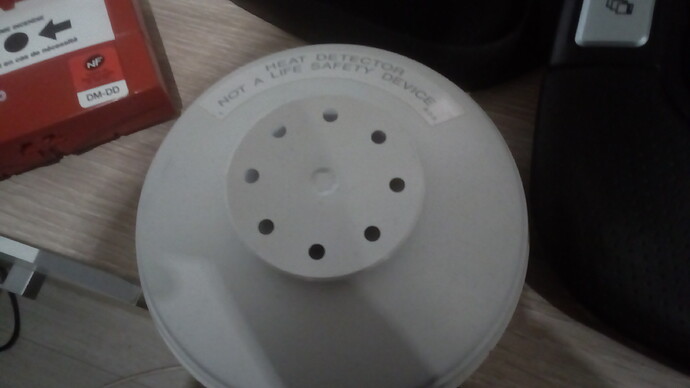 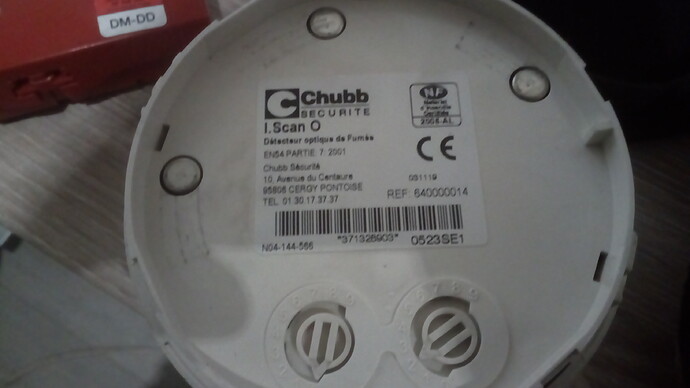 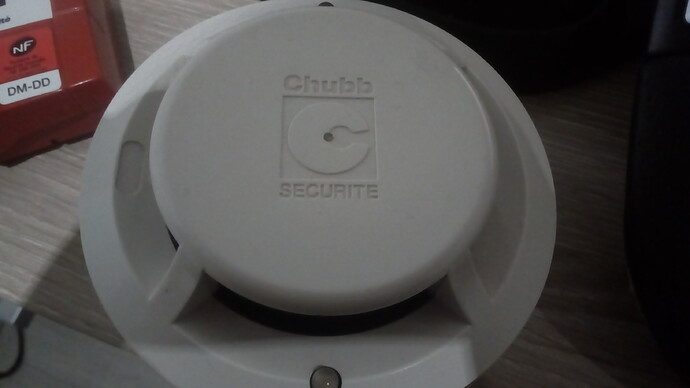 This particular version doesn’t have volume control (prohibited by NF-SSI), I have two of these… those are deafeningly loud… I killed my 12VDC power supply while testing one. 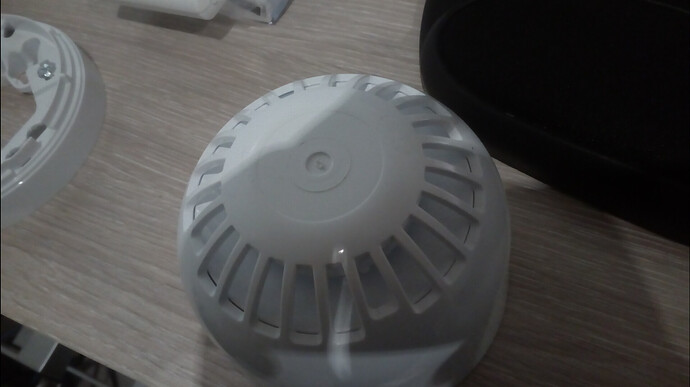 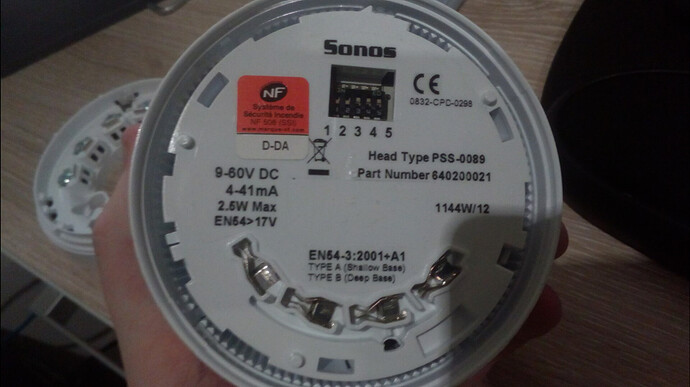 Forgot to add that

Fun fact: where I live those are called BAES (Bloc Autonome d’Éclairage de Sécurité) which would roughly translate to Stand-Alone Security Lighting Unit (SASL). This unit has a built-in self test function (it triggers randomly, the delay can’t be changed) whereas the unit will light a bit brighter to test the batteries)

There’s a small led that indicates the defaults here they are:

Here’s the unit while IDLE (it looks dimmer in reality) 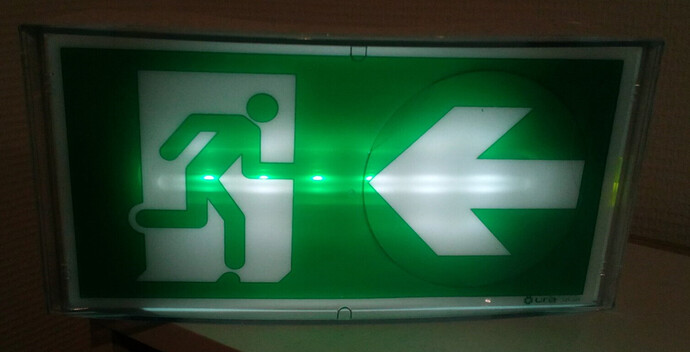 Nice to see that your collection is growing up so well! Great job on it!

Nice to see that your collection is growing up so well! Great job on it!

Well I hope that you can get it and show it off soon because panels from foreign countries are bound to be really cool!

It’s not very often that I see overseas signaling devices. I didn’t even know that Chubb Security rebranded Edwards detectors. You’ve got a sizeable collection and I do look forward to seeing more!

It’s not very often that I see overseas signaling devices. I didn’t even know that Chubb Security rebranded Edwards detectors. You’ve got a sizeable collection and I do look forward to seeing more!

About that particular heat detector, it’s not rebranded (altough the box tag stated that it was a A…T detector)… Just to clarify (Since I can nolonger edit my post lol)

Bumpty bump… Nothin’ new but aside a few updates:

I no longer have the KAC Chubb MCP (gave it to another person that I know), also about the panel that I’m about to get, it’s gonna be tough to get one, since panels pop up often on Leboncoin (French equivalent of Craiglist) but they’re often overpriced (even panels that clearly have damaged components such as corroded boards due to battery leakage).

Picture is fairly large, I apologize for that inconvenience. 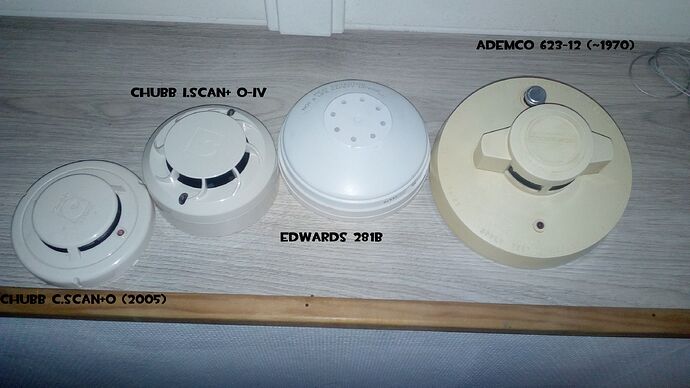 That collection that you have is very nice! I really think you are gonna have a great collection! Wonderful job!

Cool stuff! Do they have standalone sounders in France or are they always in smoke detector bases?

Cool stuff! Do they have standalone sounders in France or are they always in smoke detector bases?

Edit: about the sounder bases, I haven’t seen any but I know there are flashni bases, but most of the time standard bases are preffered.

In terms of household use smokes, battery smoke alarms are mostly preffered (hardwired smokes must be tied to a security system, and they mustn’t run off AC power). But for FA systems, the detectors are in bases (they’re still hardwired to a FACP) but sometimes Wireless standalone Smoke detectors are used (although NF-SSI standards requires FA smokes to be only hardwired on 12-24VDC, only optical/photelectric or self restoring thermic)

Well, as you asked, in France, standalone sounders are quite common (some exceptions includes the BAAS and the Type 4 which are to put it short a self-contained FACP with a built-in sounder except the BAAS can be linked to other BAASes) as for the sounder bases, I haven’t seen any in the wild but I do know there are strobe bases, again about the sounder bases, either they’re rarely used (probably to reduce costs) or just prohibited by the standards.

(My bad for totally missing out the point of your question, I have totally misinterpreted it :lol:)

Here goes an update, again? But yeah you really should be aware [or not it’s all up to you

So stay tuned guys, I’ll keep you updated on the matter (and if I ever get the panel, I hope it’s not gonna be in bad condition (e.g: Case cracked, funny smelling coming from the 12VDC feed transformer…).

Sounds like it will be a very good start for you when it comes to getting a panel! I hope that it does work out and its usable!

I gave away the Chubb MCP (I prefer the older KAC MCPs they’re extremely common and you can get one for dirt cheap).

I traded my second Sonos sounder for a AE&T/e2s Sounder.

I got a (damaged) Neutronic MCP that I broke the faceplate by mistake (so now a screw holds it in place… Plastic never ages well… :x)

Sounds like they are really great! Nice job with getting them!