yeah it kinda sounds like the integrity but it’s actually kinda different. the difference is that the pitch is higher on this one

In my school:
NAs:
Simplex TrueAlerts in the main academic buildings set on code 3
Wheelock MT horns on all exterior walls (and a ceiling mount, indoor MT horn/strobe on an outdoor wall), all set on continuous
Faraday/FOS horn/strobes and remote strobes in the gym building and the rotunda building. I haven’t heard them before, but I assume that they are on code 3
Some weatherproof Gentex Commander 2 horns (one red, one white), probably also on code 3
A couple of sprinkler bells (I don’t know the manufacturer or model, likely Wheelock) outside. They are likely on continuous.

Unknown panel: likely Simplex
Annunciators: The only one I have seen is a Radionics annunciator by the door to the gym

Pull stations:
Simplex T-bars in the library, cafeteria, and by the elevators
A few Edwards 270-SPOs in the gym
A rebranded Bosch dual action pull station in the gym (More details in another post of mine: Bay Alarm pull station - #8 by SpruceParsleyAlarms )
I don’t know if this counts, but an Ansul or similar fire suppression pull station in the kitchen
A Potter FA-50 on the outdoor patio which is kinda yellowed.
Some FCI MS-2s in an academic building

Detectors:
Likely Simplex, but I haven’t been able to look closely at the detectors 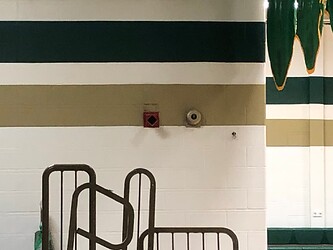 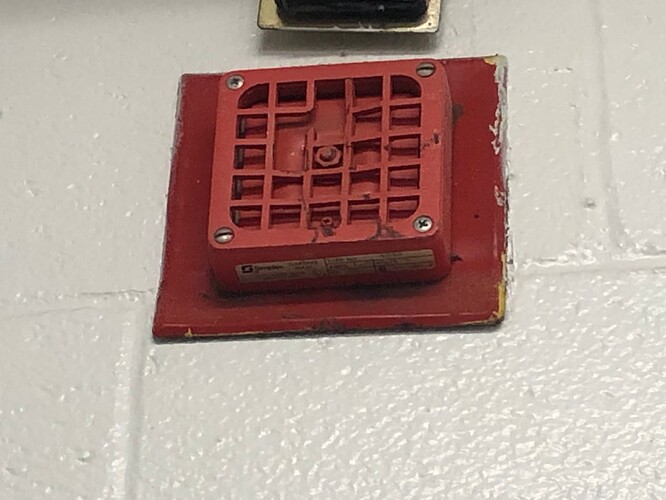 Here is the link to a fire drill and photographic system tour at my HS!

Alarms are Simplex 4050s (rare black label variant) and operate on 6VAC. Panel is a Simplex 4247-2. Initiating devices are 4251-20 series pulls and 4255 series heat sensors. There are a few replacement pull stations for broken 4251s. There is an Edwards 270 in the stairway by the gym to the girls’ locker room.

Does anyone have any wiring diagrams or schematics for the 4247–2? This will come in handy when I get it along with the rest of the original system once it gets replaced.

Update: OSFA recently checked it out!

Building A: This one is the most diverse when it comes to the types of alarms used. The new science lab addition is composed of System Sensor SPSRs and SRs. Smoke detectors are Notifier FSP-851s and pull stations are NBG-12. As you walk into the older section of the building however, things change super quick. The main devices are actually remote strobes - red Wheelock CWHTs. These are everywhere in the building: classrooms, bathrooms, most hallways, etc. The horn/strobe units are ceiling mounted Wheelock MT4s or EHSes on trim plates. From looking on second, first, and lower level floors, I have only seen 7 of these: one in every long hall, and one in a multipurpose room. Theres also a lot of outlier alarms– being two faculty office sections on the first and second floor plus a classroom on the other side of the building. The first floor office has red Wheelock E90s, and the second floor office & classroom have System Sensor SPSCRLs. These are not connected to the new addition i just talked about by the way LOL. Pull stations and smoke detectors are NBG-10s and System Sensor 2400s. Its very possible that FSP-951s are in the office areas with the L Series speaker/strobes.

BUILDING A UPDATE: Every single NBG-10 and many 2400s have been replaced by NBG-12s and FSP-951s respectively. One hallway has them all completely replaced, and another has the old 2400 detectors installed on -951 bases they JUST replaced all those with -951 heads like 2 minutes ago i watched it happen LOL. No notification appliances have been touched, though one was unwired and dangled from the ceiling for a week and then was put back up. Hope the alarms can stay for a little while longer since ceiling mounted EHs are extremely rare. Maybe a collector can salvage them!

My predictions are that the new N/As will be ceiling mount L-Series speaker/strobes since there’s already a good amount of them in the classrooms, unlike the rest of campus where it’s all E-90s. Though unlike how the new initiating devices were installed on top of the old ones (even the pull stations which i’m not sure their height above the ground is ADA compliant) the fire alarms themselves would have to be completely reinstalled because of the spacing between the EHs (only one horn strobe and one strobe in the longest hallway).

In my high school in China:
We have Beida Jade Bird fire systems installed in all the buildings on campus - main buildings, dorms, the canteen and the gym etc. Unlike the “Triple rings and a pause” sound which is common in American-style systems, fire-fighting wailing tones (just as what fire truck sirens blast) are used in horn-strobes…personally I suppose that this sort of sound is more distinctive and could hardly be confused with other types of alarms. Nobody doubt that fire truck screams denote a fire starting. Our pull stations are not activated by actually “pulling” something but, in fact, pressing on a piece of plastic. That’s not favorable cuz it increases the possibility that a false alarm is caused by mistakenly hitting on the station. An emergency broadcasting system is also installed, simply telling something like “Ladies and gentleman, there is an emergency situation. Please evacuate from the nearest exit in an orderly fashion, and do not use the elevators. Thanks for your cooperation.” and then a piece of record of air-raid siren blasts.

Our fire alarms are different in our high school. By the main entrance is simplex. Then there are single stroke bells and pull stations I cant identify some of the newer add on’s to north penn high school have simplex trualert voice and horns 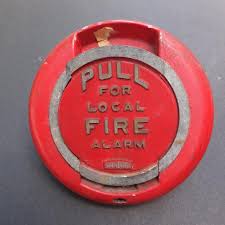 For the school I go to, (currently) we have U-MMT-S17(S) horn strobes, U-S17(S) strobes (most commonly anyway), SK-PHOTO detectors (a few have been replaced with SK-PHOTO-W’s), SK-PULL-DA pull stations, and a Silent Knight 6820 addressable system.

Did this ever replace a Siemens system, by any chance?

My school has System Sensor L-Series in operation. It also has a few inactive old horn strobes and bells. I will post the inactive ones in a help post once I get photos.

Awesome to hear some schools still have single stroke bells.

I am not sure if the bells at my school are single stroke or not.

Some of this is not well documented, so correct me if I get something wrong. (If you have recently been to the school.)

System Panel, Simplex 4100U. Located in the office.

2 Cerberus Pyrotronics re-branded 7002Ts on the opposite sides of each other.

A Simplex rebranded Gentex GX-90S5h which in my opinion is the most annoying alarm in the school. I feel bad for a classmate I know that was in the restroom when that alarm sounded because of a gas leak.

A Wheelock NS is in each classroom.

Wheelock NS’es in all the hallways. (With my experience, they are all out of sync.)

Simplex 2099-9759’s (These pull stations are everywhere mentioned except for the classrooms. I wanted to save space here so I put it here.)

6in Vibrating Bells (Dont know the Mfg or model.)

When activated, the bells, 7002t’s, and Gentex Alarms all sound on steady. The Wheelock NS’es in the classrooms and hallways sound in Code 3. Since I guess that all the NAs are one panel NAC, the NS’es get out of sync. (Easy to tell because the strobe flashing does not line up and eventually the horns sound together like one loud pulse.)

I cant really hear the majority of the alarms outside because of the bells and the super annoying GX-90S5h.

Next year, I will document a Fire Drill here.

I had some interest in this system because a former student had made a vlog about pulling the system before the system got replaced. (This is 2002.) (Example: The pull-stations used to be Cerberus Pyrotronics MSI-20B’s before being replaced with the current 2099-9759’s. I’m guessing the panel was Cerberus as well at the time, I have no idea though. (Possibly because one of the riser inspection tags have Siemens and others had Simplex.)

I also got interested because the school had recently had a smoke condition and a gas leak. (I have more on that.) So I wanted to learn more.

I will get some footage of this system soon.

Since the signals were 7002T’s the old pull stations were probably MSX’s, not MSI-20B’s.

The MSX is compatible with the XL3 panel, and the MSI-20B is used with the MXL panel.

I’ve never seen 7002T’s installed on an MXL system. Instead, old MXL systems would use Wheelock MT’s or EHS-DL1’s.

my school has simplex 4903 horn strobes and system sensor spectralerts both classics and advances plus some l series horn strobes with a 4020 panel. the school i went to for 5th grade has gamewell rebranded spectralert classics and bg12s, also rebranded by gamewell. the school also still has pull rods but there are 4050s instead of 4030s, but the 4050s are blocked up instead of replaced which they have at the other school as well

Where is your school? Lots of old schools in Ohio had pull rods!

Ah yes, Akron, the former home of a lot of Pull Rod systems until they rebuild the schools and put in newer equipment in those newer schools. Have you ever been in a school that had pull rods. I know Old School Fire Alarms did a lot of his videos on very old Akron schools that would have older Autocall equipment, 2 older Simplex panels and a Tele-Call system (if thats correct). I don’t know if there was any schools in my area that had pull rod systems. Unfortunatly the pull rods systems are basically nonexistant nowadays in my state. What I have heard from some person on the internet that Oregon Schools used some sort of Siren in the 50s and I couldn’t find any sirens in the old schools. It was usually Fredral Signal 350s or Round Edwards Adaptahorns.